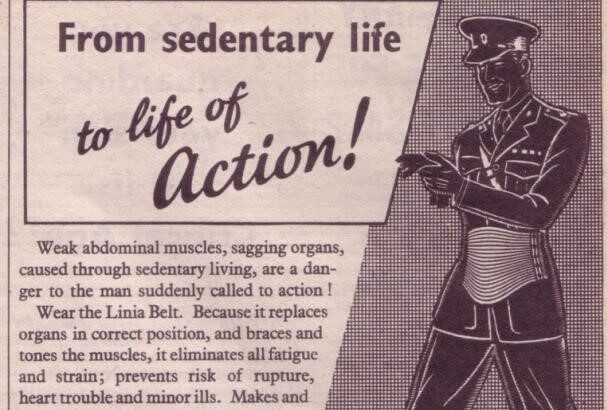 Today, influencers like the Kardashians peddle ‘waist-trainers’ and similar items that claim not only to reduce your waist, but help you lose weight or even achieve a six-pack; all while you sit at your desk. They are far from the first to recommend products like this: similar garments were advertised all over the place during the twentieth century. These descendants of the corset claimed to do much more heavy lifting than their predecessors. The corset may be one of the most famous items of clothing from western fashion history, but it is usually associated with women. What not many people know, is that men wore them too! So, what did men’s corsets look like?

Trends in men’s corsets largely parallel those of their feminine counterparts. In the eighteenth and nineteenth century, fashionable men could turn to corsets in order to achieve the fashionable silhouette, which was broad-chested, with a flat stomach, and (in some periods) a narrow waist. The garments were constructed like women’s corsets: made from strong cotton coutil fabric and whalebone supports. Most of the corsets that survive today are short and belt-like, but some advertisements from the nineteenth century depict men in taller versions that are barely distinguishable from women’s corsets.

At the turn of the century, new types of corsets appear for both genders that were meant to improve health as well as looks. For women, the famous S-bend corset was recommended by doctors to keep the spine and internal organs in the ‘correct’ position. The English menswear magazine Fashion attempted to change up the reputation of the men’s corset as something only vain, effeminate dandies were interested in, by writing about the benefits of corsets for ‘manly’ activities, like playing sports, hunting and serving in the military. Manufacturers quickly joined in with a complete rebrand of corset, giving us the ‘health belt.’

Variations of the ‘health belt’ were advertised to men throughout the twentieth century. The makers of the ‘Linia Belt,’ for example, ran ads across the globe, from The Netherlands and France to America and Australia. Adverts boasted health benefits like weight loss by way of massage, muscle toning, increased stamina, and claimed to ‘lift the abdominal organs into the correct position.’ Some adverts even claimed to help with issues like constipation. They targeted older men, men with physical jobs, but also men with sedentary lifestyles (as office jobs became more common). They appealed to masculine ideals, with images of strong athletes and uniformed pilots, and used new technologies like buttons snaps, zippers, and stretchy elastic fabrics. Some included a detachable jockstrap: the newest innovation in underwear for the active man.

If these innovations weren’t enough, you could also purchase the turn of the century equivalent of today’s electric fitness belts: the ‘Harness’ electropathic belt.’ Advertised to “weak men and delicate women,” these belts were supposed to remedy a host of ailments, from rheumatism to hysteria. You might be disappointed though: like many items ordered from Wish.com or Aliexpress today, it did absolutely nothing. On the description of their electropathic belt, the Rijksmuseum Boerhaave reports:

A combination of disreputable retail practices and the fact that their electropathic belts did not work, increasingly embroiled the Company in litigation until a compulsory winding-up order was handed to them in 1894.[1]

So, we know that men had a range of shapely options to choose from, but how many of them actually wore these corsets or belts? This is a question historians still struggle to answer. While it is known that western women of all social classes wore corsets for majority of their lives during this period, men’s corsets – like men’s fashion in general – were not discussed often, for fear of its associations with femininity and homosexuality. On top of that, only a handful of these garments survive in museums and private collections today, compared to the many women’s corsets we still have.

From this, it might seem like only a tiny minority of the most fashion-forward men actually wore these items, but we do have some sources that suggest otherwise. In their defence of the male corset, Fashion reprinted an article from The Sun, claiming that “more than 18,000 corsets were made yearly for Frenchmen, and 3000 were shipped to England, principally for Army officers.” In an interview with haute couture-legend (and manufacturer of men’s corsets) Charles Frederick Worth, they quoted:

…it is evident that the popular idea with regard to these things is that they are worn principally by dandies. But my business has shown me that in reality, they are chiefly sought after by the most athletic and soldierly of men, who are desirous of keeping their figures in order, so that they may continue in the pursuit of their various sports without looking clumsy or unfit.[2]

Charles Frederick Worth, interviewed by Fashion.

The magazine also received attention from other periodicals, one of which accused them of starting a trend among “smart men of the West” for “lacing themselves in to 22 in. waists.” Fashion staunchly denied this. They did, however, publish letters from readers who claimed to wear corsets regularly, even going as far as to claim that 75 percent of letters they received about corsets were from men confessing that they had been wearing them for years. Still, as historian Brent Shannon writes in his book on men’s fashion:

To this day, there are still niche industries that sell and manufacture menswear items like this, whether they be actual corsets, weight loss devices compression shirts, posture correctors or weight lifting belts. If you want to know more about their predecessors, check out some of these sources: