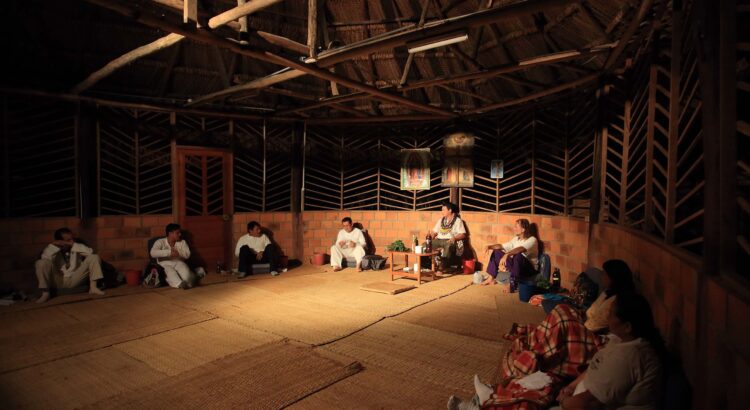 “I really did get just what I needed, and wanted. Emotions and trauma are stored energetically in the body.”

– Sara’s story on her experience with Ayahuasca

This sounds pretty interesting and as a solution for many troubled souls, but isn’t experienced without paying a price. The meaning of the medicinal drink Ayahuasca is ‘vine of the soul’, a nickname is ‘la purga’, which means purification in Spanish. The purification refers back to the throwing up and diarrhoea during the high, which can go on for hours.

Once only used by South-American shamans, now a popular mind-altering experience: Ayahuasca. The base of the brew is the vine of the Banisteriopsis caapi complemented by the leaves of the Psychotria viridis which makes a hallucinogenic drink that offers a way to the spiritual dimension. The substance’s colour is brown/red and the taste is bitter.

The leaves contain Dimethyltryptamine (DMT), which is considered a hard drug. With the right amount of both ingredients, Ayahuasca will put the user into a trance and causes hallucinations.

The history and development

The traditional users are the indigenous peoples of the Amazon Rainforest of South America. Their use of Ayahuasca dates back hundreds of years, yet the beginning of its use is unclear. The traces of its use in various cultures along the Amazon river basin make researchers suspect the substance has been used for a long time. More recently, the drink has been used in Western society.

In 1930 a new religion was formed in Brazil. Led by Raimundo Irineu Serra, the Santo Daime religion had risen, and Ayahuasca traditions were combined with Catholic Christianity. Raimundo Irineu Serra’s first experience with Ayahuasca was through befriended shamans, during which he had gotten into contact with the virgin Mary in the appearance of the ‘Rainha da Floresta’ (Queen of the Forest). His mission after this meeting was to form a spiritual doctrine, a syncretism around the consecration of the drink used for thousands of years, within the context of Christian culture and symbolism, and making use of Brazilian, Indian, Eastern and African transcendental wisdom.

In The Netherlands there are two official Santo Daime churches: Céu da Santa Maria in Amsterdam and Céu dos Ventos in The Hague. In 2001, the court of Amsterdam allowed the ritual use of Ayahuasca by Santo Daime members, being the protection of religious freedom. However, since October 2019 the use and possession of Ayahuasca is no longer allowed, as it is considered a hard drug and the drink was also consumed in more and more ‘Ayahuasca centres’ or at home, since you could buy the tea in the store. Even though you can’t use Ayahuasca in the Netherlands, there are still Ayahuasca resorts in Portugal, Spain, and of course Southern America.

“… I sat on my knees, wanting to pull my hair out. Crying and crying. I started to feel sick. Waves of nausea. Sticky, heavy, energy started flowing out of me, from my stomach to my throat and I began to gag. It felt like throwing up without actually throwing up. Energetic puke. Balls of negative energy just came out of me non-stop for what felt like hours.”

– Sara’s story on her experience with Ayahuasca

“… At this point in the experience, I completely lost touch with any sense of my physical body. The dragon and I flew through one of the most beautiful valleys I had ever seen. We rose up through a spectacular mountain range, and ultimately made our way so high in the sky that the blue turned to black, and the Earth fell away beneath us. Once we had made our way into this black abyss, the dragon left me, suspended in darkness. Alone.”

– Drew’s story on his experience with Ayahuasca

“At some point, I woke up back inside the ceremonial temple grinning ear to ear, fully at peace. I knew that I was forever changed, and simply allowed myself to bask in the sense of Love and wonder that had been left with. I understood myself in relation to all things on a level I knew I could never articulate or describe, and I have been grateful to Grandmother Ayahuasca ever since for the gifts she gave me in our first meeting. I could process this one experience for lifetimes and never get to the bottom of it.”

– Drew’s story on his experience with Ayahuasca

I came in contact with this medicinal drink via an exhibition on ‘Healing Power’ in Tropenmuseum Amsterdam. The exhibition gave an insight into various forms of healing, based on treatment methods that can be traced to age-old traditions. I was deeply impressed by all the objects, art, and rituals. Through pictures, video’s and personal stories the various cultures and their medical uses were explained, also that of Ayahuasca. With the presence of modern science, other age-old traditions are rejected. With this exhibition, Tropenmuseum put the focus on the other side of medicine all over the world, which is still being used nowadays and increases the importance of age-old traditions.

My knowledge of alternative medicine is very minimal, but it always interests me. Ayahuasca is one of those medicines. That this medicinal drink became ‘popular’ to a broader audience did not surprise me. Another example of ‘westernization’ is that of yoga. Yoga is not solely about a flexible body, but is part of a spiritual path.

What did surprise me were the videos and stories I found online from before its ban in 2019. Ayahuasca was being used for popular media platforms, not at all in the traditional way. By adding too many herbs, the taking of Ayahuasca can even result in death. However, this can happened in both the formal and informal rituals.

Most stories online show that even though the ritual of taking Ayahuasca isn’t in the presence of a shaman, the ritual is guided by a professional. The users respect the tradition in order to feel better. And after all, isn’t the search for inner peace, strength, and acceptance playing a role in everyone’s life? Even though the ritual isn’t completely traditional?