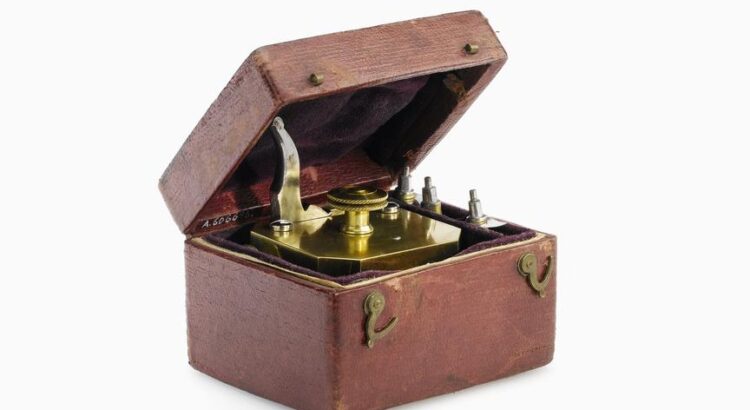 In the past there were limited medical treatments available for doctors. Often the first thing a doctor would do when someone got sick was: cut open their veins. This gruesome practice called bloodletting is thousands of years old. It is also known as phlebotomy, from the Greek words phlebos (vein) and temnein (to cut). Bloodletting started with the Egyptians and was only just recently, around the early 20th century, discredited. Inventions were made over the years to improve one of medicine’s oldest treatment, such as scarificators.

The Science Museum Group has a broad collection of medical objects. One of these objects caught my eye: a brass scarificator in a case. This scarificator is a medical instrument that was used from 1801 until 1900. It has twelve lancets that are operated by a spring released trigger. It is cocked by pulling the large lever backwards. The device was placed blade-side down on the skin of the patient. By pressing the trigger, spring loaded razorblades would shoot out and penetrate the skin, causing multiple cuts through the skin. The blades move really fast, see it for yourself in this video.

For a long time the commonly used bloodletting method was a cut in a large vein with something sharp. Such as the thumb lancet that was developed in the 15th century or the spring lancet from the 18th century. The blood that came out of the vein was collected in a, bleeding, bowl. Scarificators became popular mainly, because they did not penetrate the skin as deep as a knife cut did. It was a lot less painful and the scars healed faster. Bloodletting became less antagonizing. The device was therefore appreciated by many. Scarificators were often used in combination with cupping. A warm cup was placed over the cuts by artisans. The rounded glass cup would help draw the blood out faster. Other methods of bloodletting such as the previously mentioned knife cut or a method that used leeches were still practiced when scarificators became popular.

The case of this scarificator is made out of leather, wood and velvet. The scarificator itself is square in shape and made from brass and steel. It is at the moment in the Sir Henry Welcome’s Museum Collection. The inventor of scarificators, or the maker of this particular example is unknown. Scarificators were used in many parts the world, from the United States to Europe. The exact location where this scarificator was used, is not mentioned. I would assume somewhere in the United States, since The Science Museum Group is located there.

Bloodletting spread from the Arabs to Europe in the Renaissance. In Europe it became the standard treatment for fevers, headaches, comas and many more diseases. Unfortunately, because of its popularity, thousands may have bled to death. For example: George Washington. On the morning of 1799 he fell ill with a cold. He was treated with bloodletting. Scarificators were the common method for bloodletting in the 18th century. It can thus be assumed that Washington was cut with a scarificator. More than 2,3 litres of blood was taken over around 12 hours. Washington passed away the next day. The bloodletting probably contributed to his demise.

Greenstone describes in his article the thought behind bloodletting. He explains that people believed for a long time (460 BC) that humans were related to four basic humors: blood, yellow bile, black bile and phlegm. When someone fell ill, there was an imbalance in the four humors. Therefore, blood was removed to restore the balance. Parapia states in History of bloodletting by phlebotomy that bloodletting is one of the greatest stories of medical progress, mainly because of the persistent unbiased audit.

‘‘Of bleeding many profits grow and great,

The spirits and sences are renew’d thereby,

Thogh these mend slowly by the strenghth of meate,

But these with wine restor’d are by-and-by;

By bleeding to the marrow commethe heate,

It maketh cleane your braine, releeves your eie,

It mends your appetite, restorathe sleepe.”

Part of a poem about the benefits of bloodletting. Source: ‘A Book About Doctors’ from 1862. In this blog the poem translation from History of bloodletting by phlebotomy is used.

This object, a medical tool, was invented to make the practice of bloodletting easier and less painful. Scarificators were invented in 1600 and reached the peak of their usage in the 19th century. They were valued for more than 200 years!

There was some opposition to bloodletting. Dr Pierre Louis (1787–1872) studied the effect of bloodletting. He concluded that the procedure was less effective than commonly believed. Dr Hughes Bennett (1812–1875) demonstrated the dangers of bloodletting. He introduced a more scientific approach and supported his arguments with detailed records of patients and their survival rates. However, the medical profession did not accept their strong evidence against bloodletting immediately. Sir William Osler for example (1850–1919) recommended bloodletting as the treatment for pneumonia. Thomas claims in The demise of bloodletting that the practice eventually declined around the beginning of the 20th century.

When I started this blog, I was convinced that bloodletting was something of the past. To my surprise it is actually still used as a treatment for some diseases such as: Hemochromatosis (abnormal amount of iron in the blood) and Polycythemia (overproduction of blood cells). It also still persist in some countries such as Marocco, Algeria and Oman. The scarificator was discarded when bloodletting as a practice declined. It is not used in hospitals anymore but is often on display at museums.