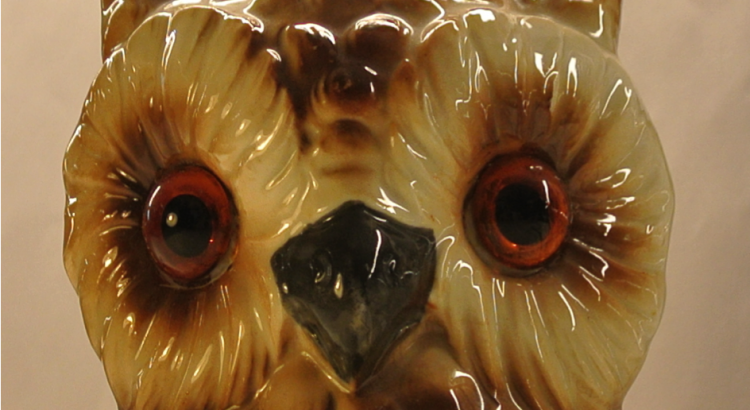 The owl was a symbol in Dutch gay nightlife in a large part of the 20th century. The word ‘owl’ was also a codeword for heterosexuals or police, and was used throughout the country. Due to this double meaning, the owl became a common piece of decoration in meeting places for homosexuals, mainly in gay bars. But the owl was not only decoration, in several bars it had an important function. As a warning for police raids or unwanted visitors, the bars needed a sign to alarm their visitors. This could be an owl lamp, a small stone or wooden owl, a bell, a code word or a gesture.

The lamp was the most common form: when the lamp was switched on, the eyes lit up, the visitors were alarmed and knew they had to ‘act straight’. In the second half of the 20th century, when the LGBT-community emancipation had started to gain ground, the warning signals disappeared gradually. However, the story about the owl and the symbol lived on.

Where the symbol of the owl and the usage as a warning signal comes from is difficult to trace. But there is a well-known story about a bar in America, using owls as a warning during Prohibition. The ‘Owl Bar’ in Baltimore used an owl lamp as a warning signal to alert their customers to the attendance of police.

Homosexuality was never illegal in the Netherlands, but in everyday life it was taboo and sexual preferences were not shown to the outside world. There was, however a law that criminalised sexual contact between a minor and an adult of the same sex, law 248bis. This law was used as an excuse to arrest men and women accused of homosexuality. It was a part of the discouraging policy of Dutch government to stop gay men and lesbians from meeting and discourage homosexuality as a whole. As a result, they were never free to express their sexuality.

Nevertheless, some of them met in bars anyway. Ran by for example lesbians, former prostitutes or open minded bar owners, the bars were open for a mixed public. They were closely watched by the vice police and obviously no safe place to meet. At least until the 1950s, bar owners were required to have permits for serving (hard) liquor, playing music or dancing. Vice police used the inspection of the permits as an excuse for raiding suspected gay bars.

In order to keep unwanted visitors out, windows had thick curtains and most bars worked with doormen. When police, heterosexuals or strangers approached the bar, the doorman activated the warning signal. When the visitors were alerted, they knew they had to act ‘straight’, stop dancing or hide the alcohol. In one bar, the Empire, the doorman rang a little bell when an unwanted visitor approached. In the meantime, he kept this visitor talking until the alcohol was hidden. In another bar, Huize Volendam, a button under the doormat activated a similar light.

The codeword ‘owl’ was also often used in gay society:

“In former Café Vredenburg in Utrecht the waiter would come to us when we were a bit too loud, and whispered ‘Gentlemen, owls in the room’”

Even after World War II, when the gay society started to emancipate and police raids occurred less often, the owl remained present as decoration in gay nightlife. It had become a symbol in gay society. For example, there is a story about how a stone owl was used at home. A gay couple explains:

“at birthday parties with family and friends, there was a stone owl on the table. It was a warning sign meaning ‘guys, take it easy’. When the owl disappeared, the party could really get started.”

The owl lamp was still seen in several bars in the Netherlands, for example in Café ‘t Mandje, owned by Bet van Beeren, an infamous bar owner in Amsterdam. According to one visitor:

“I remember an owl at Café ‘t Mandje, I used to go there in 1959. The front door was closed and you had to ring a bell to get in. When it rang Bet switched on the owl and the eyes would lit up. Visitors knew that they had to stop dancing with people of the same sex until it was known who the new arrival was.”

In the end, the owl symbolizes both the necessity for gay men and lesbians to hide their sexual orientation and their persistence to keep going on with meeting each other. Although gay nightlife needed warning signals such as the owl lamp, the nightlife still existed in times homosexuality was not accepted in Dutch society. The symbol of the owl is still very well known and stories, experiences and memories are enthusiastically shared with anybody who is interested. Fortunately warning systems are no longer necessary and gay men and lesbians can move freely in society.

Back to the Gallery