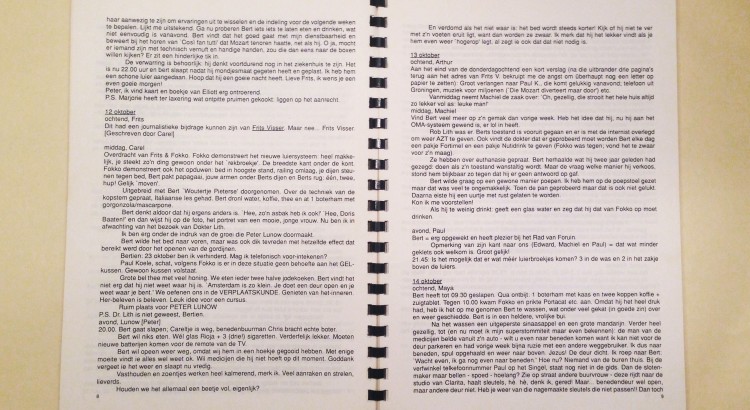 This logbook is a personal object owned by Victor van Swaay (58). Victor lived in Amsterdam during the 80s and 90s; the peak of the AIDS epidemic in the Netherlands. When a friend of Victor fell ill with the disease, he and others decided to group together to provide him with care. The logbook was used to communicate and document the details of his illness. Victor wasn’t the only one who decided to take care of those who fell ill. The logbook represents the wider rise of informal care for AIDS patients during the epidemic in Amsterdam. The 1980s saw a rise of gay nightlife in Amsterdam. The (in)famous Reguliersdwarsstraat was a street with many establishments where gay people could openly socialize and party together. But in 1982 the first rumours of a mysterious disease appeared that mainly affected the gay community. A year later the first people in Amsterdam were struck by the disease, by this time known as AIDS (acquired immune deficiency syndrome). After a while the effects of the disease were noticeable in Amsterdam’s gay nightlife as well: more and more people became sick and the Reguliersdwarsstraat fell empty. The infected people showed strange symptoms and there was still a lot of confusion about how the disease spread. While some continued partying and socializing as though nothing had changed, a fear within the community grew.

Like many others, Victor’s friend Bert fell ill. His disease took greater hold of him in 1993 and his physical health declined rapidly. A group of his friends came together at Victor’s house. Bert was not expected to make it to the end of the month. They stated: ‘We’re not going to let this happen. We’re not going to let Bert die in the OLVG hospital.’ Soon, a hospital bed was moved into Bert’s apartment on the Bloemgracht and he received professional care during the night. They jokingly called themselves ‘De Manteltjes van Bert’ (the word ‘manteltjes’ derives from the Dutch word of mantelzorg, which means informal care) and worked out a care-plan: they would preferably tend to him in groups of two; in morning, afternoon and evening shifts. They used a handwritten logbook to keep each other updated on Bert’s wellbeing: did he sleep well? What medicine did he take today? Miraculously, when Victor went to the house after two weeks of caregiving, Bert was sitting straight up in bed, smiling and talkative; he almost seemed like his old self. Though still ill, it was clear Bert would be holding on for a while, and the Manteltjes decided they would take care of him till the end.

‘De Manteltjes van Bert’ was not the only group of informal caregivers that was formed in Amsterdam during and after the AIDS epidemic. When an increasing number of people fell ill, all over town friends and family stepped in to tend to their ailing loved ones. These informal caregivers were not all necessarily gay men themselves; a lot of women, heterosexual men and neighbours found a way to give support. Undoubtedly out of willingness, but sometimes also out of necessity. During the first couple of years the medical world remained disoriented and confused about this unknown disease that made patients so incredibly ill. Some medical caregivers were even hesitant to tend to these first AIDS patients, scared of possible contamination. Thus, during these years of uncertainty and prejudice, care was given in a very personal and unsupervised way. This is also evident in the way the Dutch Aids Fonds was originally founded. The assistance this institution provided in the first few years was very unbureaucratic and intimate. For example, people could personally ask the founders for help whenever they saw them at bars or cafes. When the infection started to spread, institutions like the GGD, AMC and Aids Fonds soon evolved and professionalized their care. Personal caregiving however, such as Bert received, remained very important.

Recognizing the value of Bert’s logbook

After an intense eight-month period, Bert succumbed to his crippling disease. Even though their group of informal caretakers had been through an emotionally testing time, looking back, Victor recalls this period as a inimitable period of intensified friendship and companionship as well. Shortly after his death, two of the ‘Manteltjes’ decided to type out the logbook, recognizing its personal as well as societal value. They wanted the logbook to serve as a guidebook for other informal caretakers. After creating copies of the book, it was used for educational purposes. Although Bert’s life had ended, the logbook would be used for many years to come.

‘The dishwasher is spinning, the smoke is dissolving. Bert is lying in his casket. […] dear Manteltjes, we did well together.’