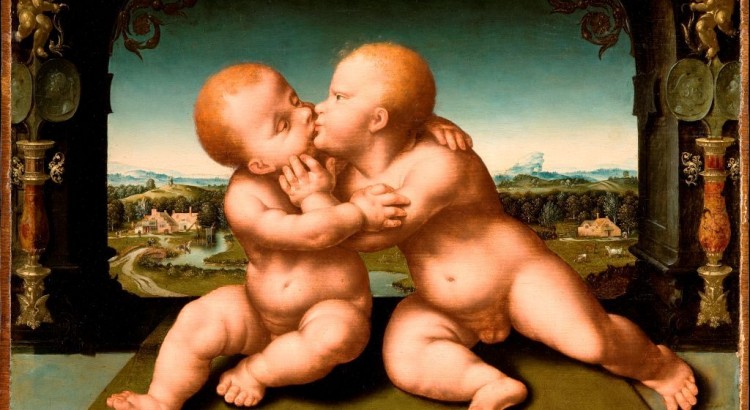 In the sixteenth century the Antwerp painter Joos van Cleve and his workshop pupils made ten versions of the painting ‘The Infants Christ and Saint John the Baptist Embracing and Kissing’. All slightly different symbolically, vertical or horizontal, but all including the same pose of kissing babies based on lost compositions of Leonardo da Vinci. This specific painting could be interpreted as an expression of Christian art. Two holy figures are embracing and kissing in a devotional way which symbolizes the mingling of souls. The medallions from Greek Antiquity in the back promote the ideal of traditional family life.

However, last year new attention to the painting questioned this saintly interpretation. In Van Cleve’s time the Antwerp government intensified the punishment of sodomy and meanwhile same-sex desire was an upcoming theme in the arts. The passionate kiss and intimate embrace of the two male babies, originally designed by the homosexual Da Vinci, are comparable with sexual representations of heterosexual couples in late medieval art.

Joos van Cleve behind the scenes

Besides his life as a painter, Van Cleve was a man who married twice, had three children and had even an affair with a barmaid. Remarkable is that contemporaries of Van Cleve, like the famous writer Karel van Mander, wrote about him as ‘mentally disturbed’ and ‘a man who went insane’. Van Mander describes the deviant behavior of Van Cleve: “He varnished his clothing, cape and bonnet with turpentine varnish, and in his glittering costume went into the street.” In the middle ages, it was possible to ignore gender roles and Van Cleve made a self-portrait as a woman, the holy Lucretia. He also had a long-lasting friendship with Bartholomäus Bruyn, a colleague in the same atelier, who made a self-portrait with Van Cleve included. At this time same-sex friendship often overlapped with sexual relations because homosexual acts were forbidden.

In search of symbolism

In the hands of the public

The message of art does not solely lie in the hands of the artist, but depends heavily on the opinion of the public.

How do you feel about this painting?

In early modern Europe this painting gained popularity among the wealthy segment of the population. Versions were hanging on the walls of the palaces of Margaret of Austria and Francois I of France. The Dutch king Willem I bought this particular painting in 1821 for the Mauritshuis. However, the real thoughts of these people about the painting are less clear than the emotional response of the  21st century viewers. Without being informed about the possible queer interpretation, the contemporary public gave different opinions.

It is about a friendship between Christ and John the Baptist. I see the softness of Christianity.

Some of them see innocent babies while others think it is scandalous to represent babies kissing like this.

Babies are not kissing like that. It is definitely offensive and quite pornographic. Seen the fact that they are two boys it is completely not done.

Overall the public nowadays has a strange feeling when they look at this painting, because what they is see is kissing babies acting like adults. Is it saintly or sexual?

Back to the Gallery