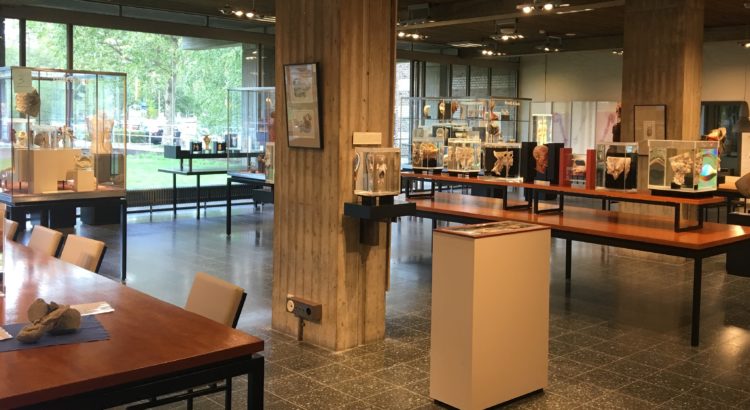 Because of their long history, most anatomical museums slowly transformed into museums of the history of anatomy. By displaying their collections the original way, visitors can learn how people thought of these specimen in the past. The anatomical collection of the Museum of Anatomy and Pathology in Radboud UMC is different. They only started collecting anatomical specimen in 1952, when the medical faculty was founded. I visited the museum and spoke with Lucas Boer, curator since 2012, about what makes his collection unique and what role he sees for the museum in society.

Education by aesthetics and respect

When I entered the museum the first thing I noticed was how spacious and elegant everything looked. Because of the 50th anniversary, a book was published in which was explained that the aesthetic value of the way the collection was being presented has been a central point ever since the museum was founded.[1] Professor Huub Lammers, who initiated the founding of the museum, was convinced that by studying the human anatomy, students would not only increase their knowledge, but also their respect for the human body. This respect would be amplified when the human anatomy was presented carefully and in an aesthetical way. When looking at the anatomical subjects this aesthetic approach becomes clear. All specimen are displayed in glass cubes, and positioned in a spatially way so all anatomic components can be studied in the best way possible. You can walk around most objects, so you can view them from all angles. Lucas explains that they want to show everything in the best possible way, because this allows visitors to learn most.

Lucas tells me that the way the collection is presented is the greatest strength of the museum, and what distinguishes it from other anatomical museums, such as the Anatomic Museum in Leiden and Museum Vrolik. The specimen their collections consist of are much older, and of high scientific and historical value because nowadays they never would be made like this. This value also has its disadvantages. These old specimen were often presented in pots, in a position that makes them difficult to study. This is even more the case when they are presented in the traditional  ‘cabinets of curiosities’. Lucas doesn’t agree with this way of presenting, because it doesn’t do justice to the specimen and their educational purposes.

‘The most open anatomical museum in the Netherlands’

It was quite an adventure for me to find the museum. It is located in the midst of the medical faculty on university campus. Later, while walking through the permanent exhibition, I noticed that most objects are accompanied by signs that give additional information. However, the language used consists of a lot of jargon and they were only in Dutch. The question arises how accessible the museum is for a broad and international audience.

When I ask Lucas about the target audience he determinedly answers ‘everyone’. According to his vision, the museum should have a central place in society, and serve as big a public as possible. When asked about the information signs he explains that the vast majority of visitors receive extra information in the form of guided tours given by trained  medical students. The tours can be adjusted to the needs of the visiting group, and they can also be given in English or German. Most groups consists of students from medical studies from mbo and hbo, for whom a visit to the museum is an essential part in their education. Other groups consist of high school and even elementary school students (for whom they have some sort of scavenger hunt). To make sure as much people as possible are able to visit the museum, admission is free, and it is opened 5 days a week. In comparison: the Anatomic museum in Leiden can be visited by the broad public only 2 days a year. So his museum is literally the most open, he jokes. In total, around 24.000 people visit the museum every year.

The museum in society

A great example of his view of what the museum should be like can be found next to the teratological collection, that consist mostly of foetuses with severe dysmorphologies or rare birth defects. There is a public debate about if it is ethical for museums to have these sort of collections. Lucas has placed a pin-up board that invites visitors to leave cards on which they have written their opinion about the fact that these specimen are being displayed in the museum. By leaving their own opinion, and reading those of others, he wanted to create some sort of ethical debate. He explains that it’s important that museums not only present information to their visitors, but also listen to and learn from them.

Furthermore, Lucas thinks that the museum could be a positive addition to the treatment of patients in the hospital, by give them ‘personal patient education’: In some cases, doctors could bring their patients to the museum when they have given a diagnosis, to better explain to them what the problem is. He spoke doctors about this, and they thought it would be great, given they had the capacity to do this. Later, I spoke with a medical student who worked at the museum. He told me that a little while ago a patient in a wheelchair came to the museum. He had a kidney-disease, and asked if they had this in the museum. This example illustrates that the demand already exists, hopefully the supply will follow.

In my opinion, this museum is a great example of a museum that is trying to be as beneficial to society as a whole as possible. The fact that it is hidden on campus makes that it can only be found by those who search for it, which is a shame. The bright side of this is that the museum is close to the patients, what broadens the possibilities for future additional patient-care.