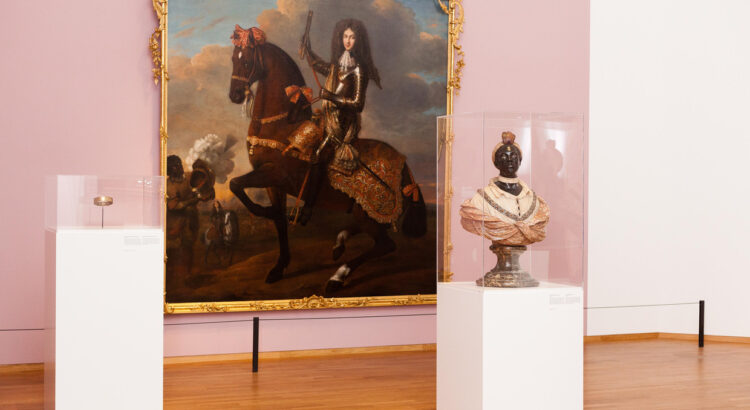 Collars are for dogs. Right? For a long time, the Rijksmuseum in Amsterdam thought that the collars in their collection were dog collars. However, when curators started making the Slavery exhibition, they realized that such a detailed, fragile collar was not a dog collar, but was used on enslaved human beings.

The brass collar consists of a plate with an eye on one end and three openings on the other, so that it fits together. The edge has round holes. According to the curators this indicates that originally leather or other material was sewn into it. The collar is engraved with decorations consisting of a coat of arms and symmetrical acanthus leaves and was made in 1689. The coat of arms was attributed to Anna Isabella van Beijeren van Schagen. She died in 1716.

In 1881 the collar was gifted to the Rijksmuseum by Prueyt, Terheyden. When the collar was donated it was labeled as a dog collar. During the re-examination of objects for the Slavery exhibition, the Rijksmuseum discovered the actual use of the collar. If you think twice, you know that the collar is too fragile and decorative to be for a dog. It is the exact size for a human being. For a lot of people, it was too painful to think about the actual use, that is why it is propably pushed away for a long time, explains Valika Smeulders, head of the Rijksmuseum’s history department and curator, in the documentary Nieuw Licht (New Light) on the Slavery exhibition.

The collar was used on a black servant in the Netherlands. He or she was an enslaved person, owned by family Van Beijeren van Schagen. The collar does not have an eye to attach a chain. In a lot of paintings enslaved people wear brass collars without chains. It is therefore likely that the collar was purely intended to show the enslaved person as a possession: as an exotic trophy or pet. Enslaved persons were deprived of any human rights and the collar was a symbol of this dehumanization. Many white people believed or argued that black people were inferior human beings, in order to justify enslaving them.

Right now, the collar is on display in the Slavery exhibition at the Rijksmuseum. The exhibition tells the story of Dutch slave trade. A very controversial subject in Dutch society. For a long time, we only looked at the wealth of the 17th century (formerly known as ‘The Golden Age’). Slavery was not talked about, ‘because it happened a long time ago and it was not our fault, right’? But slavery is a very big part of the Dutch history, we must acknowledge that. It shaped the current Dutch society. The racism that black people experience has its roots from back then. Museums have to make the public think about history and have to put history in a different perspective. They also have an institutional commitment to address and express values and principles that are necessary to advance human rights, states Richard Sandell in his book Museums, Moralities and Human Rights (2017). Neutrality and objectivity do not exist, so if a museum does not take a standpoint in certain situations, it still takes a standpoint. The Rijksmuseum expresses those values and principles with the Slavery exhibition. It shows the racism and dehumanization of black people for centuries, and how its influences our current society. The exhibition shows that we should all deal with the subject. Instead of laying the collar down, it is displayed at neck height. The exhibition literally holds a mirror up to Dutch society because the walls are largely made of mirrors: the public cannot look away any longer.

The meaning of an object

The collar tells us a story about slavery, dehumanization, and racism. Over time the collar went from a utensil to show that white people owned an enslaved person, to an object in a museum. Dutch society wanted to close their eyes for Dutch slave trade. The Rijksmuseum took part in this by mis archiving the object as a dog collar and by not displaying it at all. Meanings and values of objects change over time. By displaying the collar and making the Slavery exhibition the Rijksmuseum showed a more inclusive and complete image of Dutch history. However, we have a long way to go before the Dutch role in slavery is widely accepted as part of our history and contemporary racism. Institutions, such as the Rijksmuseum must be and stay prepared to speak out against attempts to justify unequal treatment of people, in this case black people.