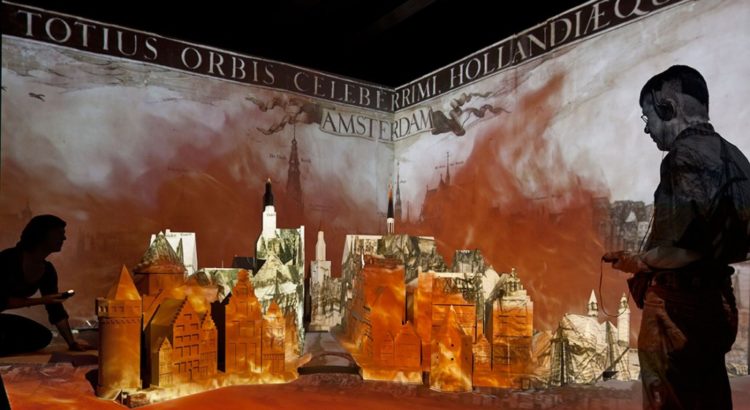 Wandering about the canals of Amsterdam, it’s rather easy to get lost between all the beauty. Many new students to the city, including myself, must have had a hard time to figure out how to get to the university without walking in circles. Since the year 2011 the city has a museum dedicated especially to one of its foremost attractions. The many canals that are so characteristic for its city centre, take centre stage in museum Het Grachtenhuis (literally The Canal house, or as they like to call themselves Museum of the Canals). This museum allows visitors to experience all the wonders of the Amsterdam canals, but within the comforts of four walls and notably in a digitized format.

Although the museum is relatively new, it is located in a historical building on the Herengracht, that originates in what the Dutch like to call the Gouden Eeuw (Golden Age). Because the canals have been entwined with the history of Amsterdam for centuries, the museum carries many interesting narratives with it. To establish a museum about these, was an idea of Gerard Krans and Wim Pijbes (former director of the Rijksmuseum). Since its opening Het Grachtenhuis takes visitors with a multimedia tour through the building and the history of the canals.

The amount of digital techniques, that are used to create this exhibition, is almost overwhelming. The five rooms, situated on the first floor, are all equipped with digital tools to take the visitors on a 3D multimedia tour throughout its main exhibition. Every rooms tells a different narrative and uses different digital tools to do so. The exhibition is designed by Kossmann.dejong (explore more of their projects here). They combine scale models with projections, animations, music and light to change your museum visit into a digitized experience. Some interesting tools are used in the exhibition to keep visitors actively involved. Multiple projections illustrate the story told in a provided audio guide, while automatically opening windows allow you to see the outside world and place the story in its surrounding context.

Het Grachtenhuis doesn’t feel like a regular museum, due to the fact that the collection isn’t based on authentic pieces. There are only digital substitutes and inside the exhibition there is no trace left of the old building. I would however argue that the exhibition is complementary to the authentic canals just outside the building. There are enough opportunities to discover those by hopping on one of the many operated canal tours. This museum offers something different; a digital discovery into the history of the canals.

The multimedia tour starts with an introduction about the Gouden Eeuw. It focuses on the flow of immigrants coming to Amsterdam during that age. The city is proclaimed to be a safe haven for refugees from all over Europe, while at the same time it experiences an economic, cultural and scientific growth. Changing projections are used to illustrate this story; optimally using the limited amount of space. On a table in the next room, various maps are projected. A group of narrators, that are supposed to represent different partakers in the design process, discuss the city planning that formed the foundation for the construction of Amsterdam’s canals. This makes it seem as if you are attending their deliberation. The technical aspect of the building process of the houses and canals themselves is explained by an employee of the museum, while visitors are standing in a scale model of the canal. I was given the impression that the audio guide was malfunctioning and therefore someone had to explain it. Later on, I learned that this was a conscious decision, to keep interaction with the visitors possible and give them the opportunity to ask questions.

Despite the attempt to creatively navigate the viewers’ attention through the exhibition, they partly fail in doing so. The narratives of the first three rooms are well explained. However, this diminishes in the last two. There is little coherence between the interactive presentation in the first rooms and that of the last two. These last rooms are supposed to extend the narrative to the present and show how the canals have evolved. On their website the museum claims that:

“We show you not only why the creation of the Amsterdam canals was so unusual, but also why they’re still special today.”

Unfortunately, this concept isn’t elaborated as much as could be. Before leaving the exhibitions, there is in the final room a big scale model of the canals as they are today. Behind it are four big screens, on which video fragments of the recent past of the canals appear. Shown are for instance, bikes and other waste that ends up in the canals. This is contrasted by joyful images of the Canal Parade, celebrating LGBTQ+ presence in the city, and the use of the canals as an ideal setting for movies and festivities. No background information is provided with these images, leaving these social issues unquestioned.

Overall the Amsterdam canals are perceived as a success story and a reason for pride. Het Grachtenhuis focuses on its wealthy residents, while neglecting the ordinary people who used to live here. Their stories are still left unspoken, only to be in some cases quickly passed without any context. The museum doesn’t completely turn a blind eye to these issues, but it does discredit them by not clarifying their context. The museum has a good opportunity to make the conclusion of their exhibition a moment of contemplation and discussion, but without a clear contextualisation of the images just shown, visitors exit the exhibition confused.

Museum het Grachtenhuis is foremost an experience for people who want to learn more about Dutch urban development in the 17th century. The splendour that the canals nowadays convey is celebrated, while important social issues are dismissed. This is unfortunate, but nevertheless one can say that by making use of digital means the museum offers you some great guidelines to go out and explore the canals yourself.