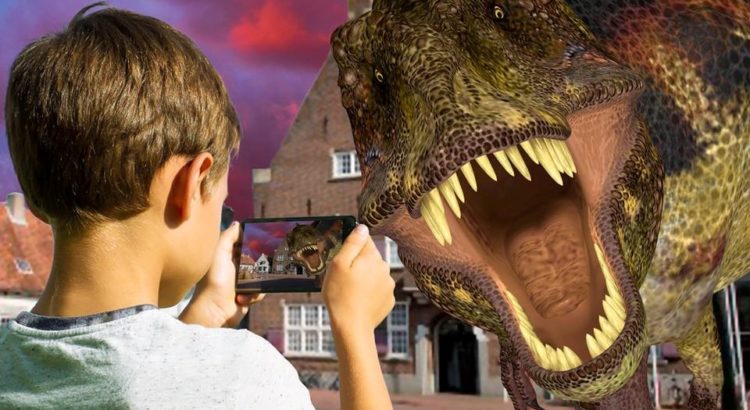 Oertijd Museum is a museum in Boxtel about the prehistory and dinosaurs for children. The museum is focussed on bringing prehistoric times back to life in an educational way. In the summer of 2017 the museum launched a new app for mobile devices where you need to hunt dinosaurs that are broken out of the museum. With the app on your mobile device you can scan certain areas around the museum to look for dinosaurs. When you spotted a dinosaur, you can catch the dinosaur and learn information about this dinosaur. The app looks like the popular app Pokémon Go, but this version has dinosaurs in it.

The Dino Hunter app makes use of augmented reality. This is a way of displaying digital contact in an image of the real world. With augmented reality it is even possible to interact with the environment and the user. In the Oertijd Museum you can spot dinosaurs outside the museum with your mobile device. This dinosaur moves and interacts with the user and environment. For example, the Mosasaurus, a water dinosaur, swims around in the Dommel and the Raptors hunt in packs over your screen. The app results in providing visitors a vivid and lifelike imaginative experience of dinosaurs. A pro with augmented reality is that the technique does not isolate the user from the world; the user retains full perception of the real world, only enhanced with a distinguishable digital layer with information through advanced technology. Around the museum in save spots are sings with a clue witch dinosaur the user can spot in this area. With these sings the museum indicates where you need to search without bringing the user into danger when the user focus on the app.

Oertijd Museum made the app with financial support from the local government and companies to promote the museum. The aim of the app is to learn children in a fun way about dinosaurs and modern technology provided more and different approaches for education uses. In the Dino Hunter app, the user learns about dinosaurs when a dinosaur is caught by displayed information about this caught dinosaur. The information is focus on children with not only text, but also pictures and symbols to make it more clear and understandable. All this information is saved in Dinopedia; this is an encyclopaedia about the dinosaurs that the user found. Children learn by searching for dinosaurs and the game element encourages children to hunt for more dinosaurs to gain more information.

The story of the app is that the seven dinosaurs escaped the museum and the user needs to catch these dinosaurs outside the museum. The good part of this approach is that the app does not  work inside the museum. Here are the dinosaur skeletons displayed in an ‘old fashion’ way with no digital tools. The museum tries to get the attention on the fossils and not on mobile devices. This approach worked because, visitors focuses on the fossils and not on their mobile devices. The only problem is that a lot of children skip the information sings inside the museum. The app brings these bones to life and this speaks to a more imaginative way to children. The information sings that where skipped inside the museum are read in the app during the hunt.

This results in the fact that the children are more likely to spent the most time outside the museum playing with this app than visiting the museum itself. Here is the paradox that the museum tries to get more visitors, but the visitors are more likely outside the museum thanks to the Dino Hunter app. However, this paradox seems true at first sight but, with a closer look is not true. The museum itself explains that seperation between the app outside and the museum inside was on purpose because, if the app works inside it would dominate the fossil collection; children are more likely to choose the digital tools above non digital tools. The museum wants to visitors to look at the fossils with there eyes and not on a screen. When the app works inside the museum, visitors play the hunting game and visiting the museum at the same time and according to the museum this cannot be together. When this is separated, the app is more of an extra feature and a contribution to the collection of the museum. The separation of inside and outside the museum is well made and gives visitors a choice in which way they see and learn about dinosaurs; inside the museum or with the app. Most of the visitors used both ways and in this way the app is only a contribution to the museum information.

Visitors rank this app high and the museum gets a lot of good critics about the Dino Hunter app. Maybe not for the high educational value, but for the fun it brings and gets children excited for history. There is nothing wrong with this because, history is something people should do, not something people consume. The use of augmented reality gets a new and attractive look to teaching history by bringing the dinosaurs back to life. When the users become more enthusiasm about these dinosaurs, they are willing to learn more about these prehistoric animals. These good critics and enthusiasm result in the fact that the museum gets more visitors and all these visitors excited about dinosaurs in a new way. The museum made a good distinction between indoor and outdoor which made the app a contribution and not a replacement of the museum. The only disadvantage is that some visitors rank the app higher than the museum itself and the app become the main priority of the visit. The next step is for the Oertijd Museum to get the visitors more exciting about the museum itself than the app so the app stays a contribution and not the main focus of the museum in the future.