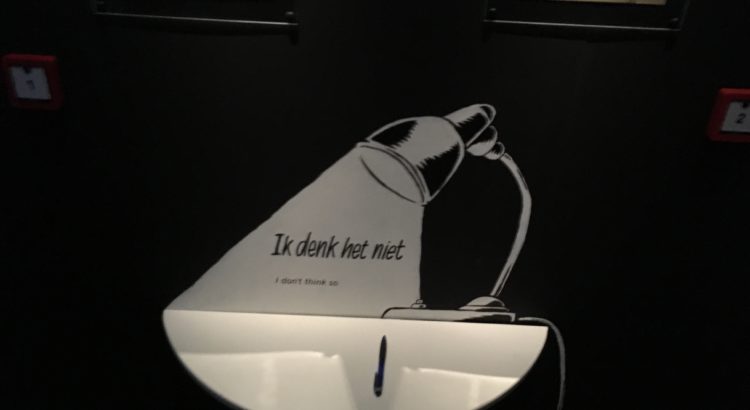 Yesterday I went to see the exhibition ‘Explosiegevaar!’ in the Vetzetsmuseum in Amsterdam. This exhibition is all about the attack on the Amsterdam population register on the 27th of March 1943. On this date a group of Dutch resistance members blew up – and set on fire – the population register, in order to destroy identity cards and therefore to make it harder for the Germans to control society. Although the attack was a success, it wouldn’t take long for most resistance members to get caught and – in most cases – shot.

In the exhibition ‘Explosiegevaar’ visitors follow the story of 6 group members – from the planning of the attack until the executions. One of the main tools in this exhibition is the audio guide. Without it, it would not function. As in most cases, this exhibition consist out of a step-by-step storyline. Every room has its own story to tell. The structure is chronological, so there is only one path to follow. In each and every room you have to point your remote control towards the sounds symbol on the wall in order to start the audio fragment.

The audio fragments are a combination of stories told by the narrator and by persons who are resembling the protagonists. At first I was quite surprised. In a good way. The 2nd room for example had to resemble a bar. This was a place where artist were discussing if they would join the artist union which was formed by the Nazi’s. During the Second World War Dutch artist were forced to join the union, otherwise they were not allowed to perform their job anymore. In my headphones I could hear people discussing this subject. On the background I could hear the noise, the hubbub. This was really good. It made you feel you were actually there. During this discussion you could hear pro’s and contra’s. ‘Sign up, because that’s the only way you can preserve your income!’ Or, ‘do not join, we should not let the Jews down’ (Jews were not allowed to join)! Now, and I found this very interesting, the visitor gets the question if he would have joined the Nazi artist union. ‘Point towards the right sound symbol if you would have, point to the left if you wouldn’t have done it’.

Based on the information I had at that time, I chose to join the union. For the simple fact that I could keep my job and provide for my (hypothetical) family. Although it felt bad, it seemed to be the only sensible option. The audio guide continues: ‘So you have chosen to join and you are not the only one, because the great majority of Dutch artist signed up. But do you think it is fair for the Jews? They have no choice, they are not allowed to sign up. Should you not stand up for them and refuse to join? Can you not findanother job or join the resistance? You can now choose again. Are you still joining or….?’

It is interesting that the audio guide elaborates on your decision. This gives the visitor the idea he or she can influence the storyline. This in combination with the wellworking audio, gives the visitor the feeling to be part of the (his)story. It also makes really clear how hard it was to make the right decisions at that time.

Unfortunately there were no more situations in which the visitor could influence the storyline. Thereby, as is my personal experience, the audio tour gets a bit boring after a while. I did lose focus after the 5th or 6th story. Furthermore, because of the audio guide there are not a lot of ‘social’ interactions. Of course you will be able to speak to each other after the end of every audio fragment. And yes, you can pause it. But I wonder if that will happen a lot. A ‘live’ discussion as is possible with a ‘real’ tour guide for example, is just not likely. The visitor is drawn into his or her ‘personal’ story and in most cases doesn’t do much more than just listening.

So how does the audio tour at the ‘Explosiegevaar’ exhibition influence the historical interpretation of the visitor? In my opinion, it has a two very interesting features. 1: the quality of the audio itself including the background noise. It really gives you the feeling you are there for a moment. You can hear the characters discuss with each other and it is not very hard to imagine you are sitting at the same table. 2: The implementing of really difficult questions, that are based on the issues people back then had to deal with. Of course a ‘real’ tour guide can ask the same questions, but tour guides usually work with groups. In this case you are the only one who is asked and it is you to decide. 3: the fact that you can influence the storyline. By choosing the one or the other option influences the information/story you will hear. This provides for interaction.

On the other hand have I also experiences lesser aspects of the audio tour at the ‘Explosiegevaar’ exhibition. First, the fact that the whole exhibition is based on the audio fragments. It just gets boring to listen all the time. Secondly, the lack of social engagement. Because you have to listen with your headphones on to the audio guide all the time, it can be quite a ‘lonely’ tour. This also brings me to the third point of criticism: the extent of interaction. The museum itself calls the exhibition an interactive one. This is probably because you can influence the storyline (one time) and play a really boring game (one time). In my opinion there is not much interaction at all. This because of the fact that there are just two moments in all of the tour that you are really interacting. And secondly, because you can do the whole tour without interacting with people once.

So the audio tour at this exhibition is worked out well in two ways: the quality of the audio and the way in how it is possible to influence the story line. Unfortunately it also gets boring and is there a lack of (social) interaction. As for my final conclusion in this blogpost I would like to say that the possibilities with audio fragments are promising, but that an exhibition should not focus too much on just one way of communication.