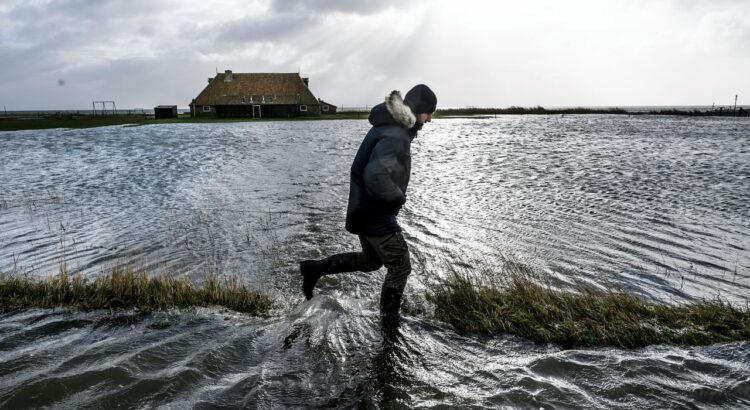 Global warming is a hotly debated issue everywhere. Politics is full of deniers, people refuse to act, and big companies are actively hindering meaningful change. However at the same time real people are in real danger. Bushfires in Australia and California, dying coral reefs and droughts affect millions of people around the globe. For the Netherlands, the greatest danger is also the oldest enemy, the sea, but still, people somehow seem ignorant of the looming disaster.

In a visually stunning trip around the world, the photographer Kadir van Lohuizen shows us the acute dangers of the rising sea levels. His exposition Rising Tide in the National Maritime museum in Amsterdam (het Scheepvaartmuseum) opens your eyes through pictures of a world that is disappearing, literally, under the sea. Kadir uses the term wake-up call and I think it fits well. In the Netherlands, sea level rise seems like a remote problem. Most Dutch people feel safe. We are well protected by two of the biggest flood defences, the Delta Works and the Afsluitdijk (literally the Shutdown dike), in the world. This exposition, however, shows how close the problem actually is, and in doing so, the museum fulfils one of its most important societal duties, namely to generate support for social justice.

The exposition starts in Greenland, then to Bangladesh, The UK, Panama, Miami, Kiribas and finally the Netherlands. The idea for the project started in Panama, where Kadir experienced the evacuation of people due to the effects of climate change for the first time, back in 2013. With the help of the New York Times he travelled the world to make this exposition. By staying for extended periods of time, he got to know the real stories from the local population. He uses these stories to masterfully enliven the photos.

All the areas shown have unique problems, only connected by the overarching cause of those problems, the rising tide. Consequences unimaginable to us, like the permanent abandonment of entire cities and countries, are not far off in some places. The underlying tone is a grim one, but beautifully expressed. Take, for example, the situation of Miami, a city doomed to be abandoned by 2050. The city is built on limestone, which makes it all but impossible to defend it against the water. Build a dike, and the water will seep underneath. What most engrossed Kadir, and me too, was that new apartments are still being build on the shoreline. Potentially losing cities like Miami underlines the urgency for action that need to be taken now, before it is too late.

The main goal of the exposition seems to warn. By first showing all these examples and ending at our very doorstep, the message hits home. Watching the online tour, where Kadir himself tells the story of his exhibit, I felt disheartened. He mentions how it seems like we need a disaster to act, like in New-York after hurricane Sandy in 2012. The worst-case scenario is a sea level rise of about three meters, and nobody seems to be prepared to accept that reality. Will we also need a disaster again? A new Watersnoodramp? Our protection is up to date for now, but not for the future. One can only hope we’ll wake up before we’ll drown.

Even before the opening, the exposition got much media attention. The National Maritime museum generated publicity by collecting protest signs at the earth strike on the 27th of September 2019. Handing in these signs gave a free ticket to the museum. Accompanying this great promotion, the museum also made a podcast series, IJscast, with Kadir, professor emeritus polar studies Louwrens Hacquebord, a conservator and the in-house museum teacher. The reaction in the media was almost universally positive. The website also functions as a collection hub for stories and different projects. You can calculate your own impact on the environment, and you can see whether your neighbourhood will flood. After the temporary closure of the museum due to Covid-19, Kadir also made an online tour where he tells the story of his exposition. It’s obvious that they wanted to tell this story to as many people as possible.

That is one of the most impressive accomplishments of this exposition and the National Maritime museum. It opens up a dialogue about an ever so important issue, as also acknowledged by Museum Tijdschrift. The museum takes its societal role in informing and activating a broad public. It is impossible for museums nowadays to stay neutral, however badly they want to be seen as above the discussion. Not taking a stance is also taking a stance, and what this exposition does is therefore, at least in my opinion, quite brave. They don’t go so far as tell people to change their behaviour, but they do make you think about a looming disaster that should be much more central to our thinking and behaviour.

Rising Tide is a wonderfully beautiful exposition about a future we do not want to think about. It spurs the visitor on to act, gives us a choice between acting and drowning. By visiting places both far away and close to home, both in acute danger and distantly in trouble, the story really lands. It is a brave and necessary exposition that shows the potential that museums have for making a meaningful change.