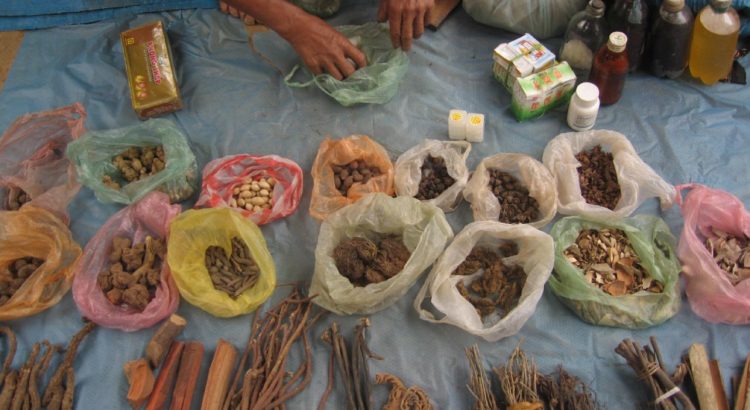 With burn-outs being occupational disease number one and depression rates rising at all ages, people seem to be searching for something different then western medicine to solve their health problems. Some people seem to replace typical western medication like antidepressants, for alternative medicine like St. John’s wort, an herb that that has risen in popularity not only in the United States, but also in the Netherlands. Meditation, spiritual balance and following astrology cycles are all examples of alternative treatments people use to fix their health problems. With this growing number of people trying and embracing these methods, alternative medicine has been taken more seriously, resulting in insurance companies even covering these treatments.

Playing into this popularity, Museum Volkenkunde in Leiden decided to organize an exhibition called ‘Helende Kracht (Healing Power)’. On the website of the museum, Healing Power invites you to take a look at different healing traditions worldwide and admire their collection of magical pouches full of medicinal substances, meaningful jewelry and ceremonial objects. They may be new and special in western society, but the methods shown in the exhibition are centuries old and come from all over the world: from Asia to Canada, from the North Pole to South America. The introduction makes me exited and I go in with high expectations about learning a lot on all sorts of alternative medication.

In the last couple of decades, there have been more and more exhibitions that approach medical themes using other disciplines like cultural, social and ethnological history. Often, these are temporary exhibits that show a variety of artifacts and their history.[1] Museum Volkenkunde is no exception. The array of objects is extensive and from all over the world. This can be traced back to the first king of the Netherlands Willem I, who, in the nineteenth century, stimulated national institutions of science and art, and ordered scholars to gather collections from China, Indonesia and Japan. Some of it found its way to the Rijks Enthographisch Museum, from which Museum Volkenkunde originated.[2]

Healing Power takes you along these artifacts and art installations, but it starts with a look at different healers in the Netherlands, who focus on balancing mind, body and soul. In short video interviews, the visitor is introduced to six ritual specialists working in the Netherlands, for example the Dutch witch Coby Rijkers. The exhibition continues in other rooms which show contemporary art inspired by the theme of healing power, different artifacts like amulets and other ceremonial pieces. According to curator Cunera Buijs, the exhibition does more than displaying the artifacts, it tries to tell the personal stories behind them. The number of artifacts, video’s and art is kind of overwhelming, with the amount growing in every room. It is easy to glance over an amulet, pots of pills and funny-looking herbs. But the information about what these certain artifacts mean, is not always easily found.

The exhibition’s art also reflects on western health issues, as curator Wouter Welling tells us. For example, the first thing you will see is an art installation from Sokari Douglas Camp, who plays with the idea of western society wanting to endlessly talk about their problems in therapy until their heads are spinning. The statue is of Sigmund Freud and a client, which actually spins around when walking past it.

Ironically, Museum Volkenkunde is located in a former academic hospital. But I did not learn a lot about medication, despite my initial excitement. The issues being tackled were mostly mental, not physical. I expected an exhibition showing all the different kinds of medication, but instead it focusses on a religious and spiritual view on health.

Today, the mental issues a lot of people are struggling with, are often caused by our obsession with our phones, the internet and being “on” all the time. But besides phones being (part of) the problem, it is a great way to communicate information about health. This is probably what museum Volkenkunde thought when creating an app and a podcast for their Healing Power exhibition.

Instead of an informational booklet, the museum offers the possibility to download the Healing Power app. It guides you through the exhibition and provides a ton of additional information by highlighting artwork and objects and link audio fragments to it. It even quizzes you on the exhibition. In the podcast curators, artists and healers dive deeper into the exhibition.

But why keep these additions optional? The most I learned about the exhibition’s aim, I learned from the app and podcast. These so-called “behind the scenes” conversations, are arguably the most interesting part. Learning about the reasoning of both curators and healers, makes understanding the artifacts easier and more fun. For example, going through the first episode of the podcast and the app, taught me more about alternative medication, then I learned in the exhibition.

So in a society where being addicted to your phone can lead to health issues, Museum Volkenkunde would do well to include the information from the app and podcast in the exhibition. This way the visitor gets the opportunity to take in all the information from all sources. The danger is that some things will simply be more hidden than others, so that what the visitor is most interested in might disappear in a sea of artifacts. When combining all sources of information, the exhibition could become too large, extensive and aesthetically unpleasing. However, by making certain information only accessible on the app and podcast, the museum will risk excluding some visitors, who might not have knowledge of these extra’s, or do not own a smartphone.

All in all, this exhibition introduces a branch of medicine not everyone is all that familiar with. However, by adding some of the extra information to the exhibit itself, it would become more well-rounded and inclusive.

Healing Power is on now until January 5th 2020 at Museum Volkenkunde Leiden.