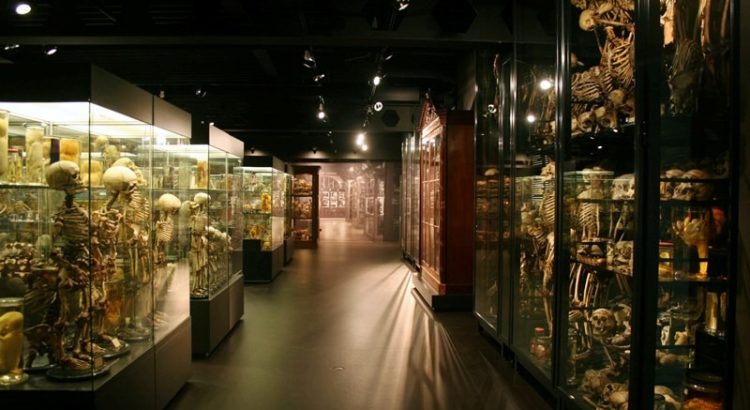 Museum Vrolik closed its doors in 2011 to give its interior a ‘facelift’, as the Dutch Journal of Medicine calls it. The museum started as a private collection of anatomical preparations in the 19th century by Gerard Vrolik and his son Willem. At the time, the collection was only to be seen by a very select few. In de 21th century, the museum was opened to the public and was awarded a new status by ‘Stichting Academisch erfgoed’ in 2009. This new status as academic heritage and the fact that the museum is catering to a wider public, seems to have considerably influenced the new approach and look of the museum, into something quite unique but at the same time familiar in a nostalgic way.

“When we were redesigning in 2012, we were trying to re-create something of the look and feel of he the ‘classic’ anatomical museum of around 1900”, medical historian and curator Laurens de Rooy explains. “The kind of classical anatomical museum where a lot of the collection is seen by the visitors, where the vitrines are well ordered by specimen, where you could wander through all the artifacts, where you can create your own narrative by taking in what you see.”

Collection Vrolik started out as a purely academic collection of anatomical preparations. The presentation of the collection therefore was not meant to be interesting for the layman. Anatomical collections before Vrolik were not always like this. People would come see these collections to gawk at skeletons, dried up rarities and odd specimens in jars of alcohol. Often these specimens would be placed in unnatural environments or positions just to make them even more bizarre to attract the sensation seeking audience.

This was never the approach the Vrolik collection took. Nor was it the approach of the collectors who added to it. This doesn’t mean the museum lacks non-controversial artefacts. Within the medical history, Museum Vrolik specializes in the normal and divergent development of the human body. The development of the fetus in the womb can be seen in multiple specimens, al well as birth defects like cyclopia, open backs and Siamese twins. These parts of the collection can be difficult to display out of ethical considerations.

The collection itself, including the controversial pieces, is academic heritage. Historically speaking, it has its story to tell as part of the development of medical knowledge. Its content may be controversial now, but curator De Rooy doesn’t believe we should alter the content of the museum too much, to fit current ethical debates as the collection is, itself, a historical artifact. “Ethical consciousness has grown considerably. That is something that has changed between 2012 and now. But what a lot of people are doing, is subjecting the past to their current ethical framework.” By placing the collection back in a 20th century display and by creating an atmosphere that makes people experience a sense of history, visitors may better understand the material. “By making this museum a traditional one, people feel this is an old-fashioned place. Which I think is fitting for the material that is on our shelves. These are historical specimen that came to be in a time where laws and ethical thinking were different.”

The 21th century human might be unsettled by the 20th century display. I asked De Rooy if he thought about that, through this initial shock, people could get the feeling that they are looking at something they are not supposed to look at. Which seems like sensationalizing of an already controversial collection. De Rooy confirms he has thought about it. He agrees that it could compromise the medical story he wants to tell.

The disclaimer on the door is there to prepare people who don’t know the collection. “You can’t refuse people by the perspective they take into the museum. I see that as democratic. If people come in here looking for sensation … that is not our perspective, not our approach.” De Rooys perspective is that, even though current ethical concerns are not to be ignored, conveying the collection as medical heritage is more important than catering to ethical concerns of a portion of the public.

A sense of History

The sense of history is a very specific atmosphere the museum wants to convey by recreating a 20th century anatomical museum and by playing with light and color. Walking through the entrance of the museum is indeed like walking into another time. You leave the white and clinical corridors of the AMC hospital to enter a warmly lit, but dark painted room. Filled with seemingly endless rows of showcases containing a dizzying array of all kinds of body parts.

“Ambiance is important” De Rooy tells me when I ask about the choice of interior. “in the search for balance between the medical story and the sense of history, the museum tends to lean toward esthetics”. This is a way of presenting de collection to the public. A strategy that leans on the ambiance to pull the visitor in. The interest sparked by the initial ambiance, is what the means of presentation lean on in Museum Vrolik.

When interested in a specific specimen, the visitor can find specimen like it in the same vitrine, sorted by body part, and can find specific information on handouts between the show cases and in a booklet by the register. Museum Vrolik doesn’t want to tell its visitors one specific story. It wants them to find what interests them and let the wide array of specimen tell multiple stories: something a 20th century Anatomical Museum would lend itself very well to.

Museum Vrolik has found a very original way to present its academic heritage anatomical collection to the public. Where other medical museums now worry about the way the increasingly ethically charged public perceive their collection, Museum Vrolik tries to take the public back to the time in which these anatomical collections were viewed very differently. By focusing on the ambiance, the museum trusts the public to sense that the specimens are part of a historical whole that wouldn’t be the same if it would start editing itself according to current values.

The museum doesn’t focus on the medical story. It is there for the people who are looking for it, but it is not the priority in de presentation of the collection. The medical narrative is a story that should also be told or talked about to and with the public in a more direct way. But as De Rooy says as well, other museums with more suitable collections can do this. Museum Boerhaave already has. Museum Vrolik has chosen to present itself as one big historical artefact, an anatomical collection that is academic heritage, a collection that conveys most in its original shape and form.