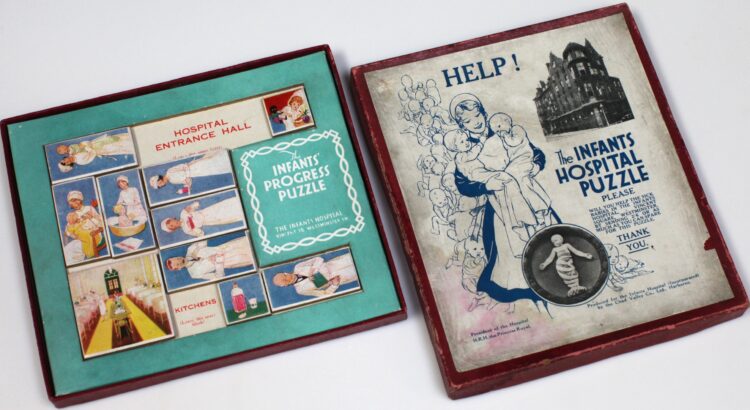 Throughout history humanity has had to face numerous threats to its existence. While many of these were man-made, mother nature itself can be a cruel mistress indeed. Perhaps there is not a more common or longstanding danger to humanity as the everlasting threat of disease. While nowadays it is relatively easy to teach people how to live healthily through means such as modern technology or our schooling system, in the past this was much more of a roadblock. How does one teach a wide audience about health related dangers in the absence of modern technology and institutions such as these? The Puzzle pictured below is a great example of the creativity of the human mind, serving not only as an educational tool for living healthily, but also as a means to support the lacking healthcare system in the United Kingdom during the 1930s.

The puzzle itself comes in the form of a perfect square. Being only 13 x 13 centimeters big, 2 cm deep and weighing only 1 kilogram, the toy is relatively small and easy to hold, even for young children. The toy is mostly made by carving out a piece of wood. The puzzle is also covered by a thin layer of plastic to prevent any cheeky or frustrated players from cheating. The board is adorned by some artwork, depicting the slums on the lower left and a nurse holding a young child in the middle, as well as a photograph of the Infants’ Hospital in London’s Vincent Square. The maze also has multiple holes carved into it, accompanied by a variety of health-related words and terms such as ‘Bad feeding’, ‘Chill’ and ‘Lack of sunlight’. These holes serve as obstacles for the player, therefore symbolizing very real health-based pitfalls.

As ball mazes are still common today, the way the game is played might be familiar to you. The goal of the game is simple: guide the ball from the starting position to the end goal, or in this case, from the dirty slums to ‘great health’. The player does this by skillfully moving the board itself to make the ball roll through the maze. The maze itself is straightforward, having no branching paths. The difficulty, however, comes in the form of the previously mentioned pitfalls. Should the player tilt the board a bit too enthusiastically, the ball will fall down one of these pitfalls and will roll back to the start. As mentioned before the pitfalls are accompanied by health related terms, making it so that the holes are not merely pitfalls in relation to the game, but also symbolize real health-related pitfalls. Thus to truly escape the maze and achieve ‘good health’, the player must first overcome and avoid these common causes of health related issues.

The puzzle itself was designed by Chad Valley for a noble cause. It was a way to raise money for the Infants’ Hospital in Vincent Square. Before the establishment of the National Health Service in 1948, the United Kingdom had no form of nationally funded healthcare system. Combined with the often lackluster living conditions of most of the british working class during the 1930s and the ongoing Great Recession this led not only to bad health conditions among the population in general, but also to tragically high mortality rates among infants. The lack of a nationally funded healthcare system also meant that those healthcare services that were available relied on heavy donations to stay open. Because of this the use of the object was twofold: on the one hand it helped to fund one of these healthcare services, while simultaneously teaching the wider audience about common pitfalls when it comes to health.

This ball maze was not the only product made by Chad Valley on behalf of the Infants Hospital with this purpose in mind. The company made a range of different forms of puzzles to raise money and awareness, such as a magic line puzzle. This puzzle consisted of 16 pieces, each representing different wards or hospital staff, with one part of the magic line on it. The goal of the player was to form one interrupted line between the entrance of the hospital to ‘health’. Interestingly this puzzle was accompanied by a manual in which the player was told that if they had trouble solving the puzzle the hospital would happily send you the solution, while asking the player to consider enclosing a small ‘’payment’’ for the sake of ”the sick babies’’. A jigsaw puzzle also produced by Chad Valley similarly states on the box:

‘’Please help the sick babies in the infants’ hospital Vincent Square London. S.W. By sending 2/6 for this puzzle.’’

Box for the ‘Infants’ Hospital Puzzle

Both of these seem to suggest that educating a wider audience was most likely only a secondary goal compared to raising the money.

A succesful experiment or merely a unique fundraiser?

Both the ball maze and the other puzzles seem to acknowledge that poor housing and bad surroundings are heavily related to health problems. Poor diet, cold and lack of access to medicine are all common problems to those at the lower steps of the social-economic ladder. While it is admirable that these toys were sold as a way to raise money for a good cause, it does call into question its success as an educational tool. For the people who would stand to gain the most from being educated on the subject, were also the ones least likely to be able to afford a recreational good such as this.

The ball maze now resides in the London Science Museum. The object is on display in the ‘Medicine: Wellcome Categories’, specifically in the section on ‘Medicine and Communities’ aimed to ‘’examine health challenges faced by groups of people and society (…) and how our behavior can affect our health’’. A fitting place for this puzzle as it showcases not only the common causes of health-related issues many people at the time had to face, but also serves as an attempt to bring awareness of how our behavior and surroundings affect our health to a wider public.