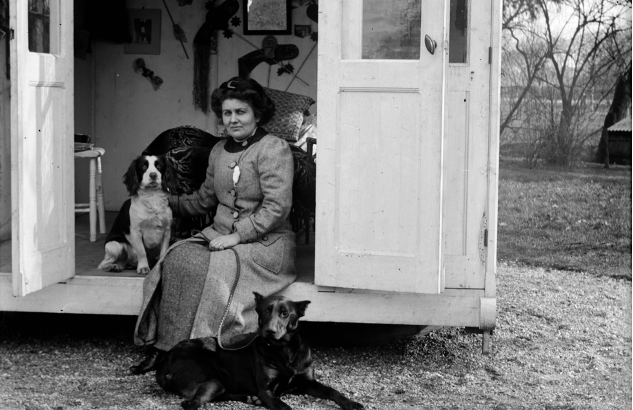 If you were looking to book a weekend away in the last two years, you have probably considered a tiny house. But have you heard of it’s predecessor, the TB-hut? These small houses were very popular in the 19th and 20th century. However, they were made for a very different purpose.

“Exactly as they were in the olden days, with all the authentic elements that are reminiscent of the past and of course equipped with a steel turntable and solid wheels. […] A TB-house in your garden can be an eye-catcher. A wonderful place all to yourself in which you can retreat from the hustle and bustle of everyday life. In the sun or in the shade. And of course, it can also be a nice bit of extra space in case your (grand)children, family or friends want to stay over.”

It’s all the craze right now: tiny houses. Since the outbreak of the Covid-pandemic in 2020 people in the Netherlands tend to move away from the city and retreat in the forest or near the beach. These getaways are – usually because of the Covid-restrictions – not abroad but close to home. In these houses, which can be bought or rented, one can follow the guidelines of the World Health Organisation, like ventilation, self-isolation and good personal hygiene, to a tee while also getting a well-deserved vacation.

Although the pandemic is mostly under control, I still wanted to know what all the fuss was about, and decided to book a weekend away with a friend this winter. While searching for these tiny houses, I stumbled upon a Dutch company called ‘TBC-huisjes’ (TB-huts). While doing some research, I came across different pictures of Dutch people sitting and lying in these houses in the first half of the 20th century. These people were infected with the deadly disease tuberculosis (referred to in the name of the houses). The TB-huts are tiny houses avant la lettre.

Nowadays, original Dutch TB-huts are to be considered national heritage. They are part of the collection of different Dutch museums, like the Rijksmuseum Boerhaeve, The Open Air Museum and the Zuiderzee Museum. They all have similar features: the houses are made of wood and usually have doors and windows at the front and sides of the house so that the patient could get enough sunlight and fresh air. This isn’t always the case though. Sometimes the front of the house was left completely open, as you will see in the picture below.

The huts are big enough to fit a bed, a bedside-table and a chair. In some cases, there is also enough space for a desk. Another feature was a turntable beneath the house. This way, the house could turn according to the position of the sun.

In the 19th and 20th century tuberculosis was number one deadly disease in the Netherlands. People often thought that it was a hereditary, but its actual cause was unknown for a long time. There was no cure for the disease. In 1882 it was discovered by German scientist Robert Koch that tuberculosis was actually a bacterial disease transmitted by coughing. Still TB remained uncurable. The only remedy was lots of sunlight (heliotherapy), a special diet and fresh air.

Tuberculosis was associated with poor personal hygiene and pollution in the cities. The living circumstances of people were thought to be a contributor to the problem. As the Dutch doctor P.B. Middendorp wrote in 1918:

“Tuberculosis is a home disease and in the field of home hygiene lies a great part of the work of prevention. […] No bedsteads, separate bedroom and living room, practical ventilation arrangements, good position in relation to the sun, large window area, plenty of fresh air and sunlight will prevent a great deal of misery and disappointment.”

Doctors recommended stays at spa resorts, usually in Switzerland, in order to combat the disease. For rich people this was no problem. However, the working class couldn’t afford such luxury. For them, there were so-called lighallen (translates to: halls to lie down in) near sanatoria. This were rectangular cabins with beds for the patients.

These so-called lighallen were also made in smaller proportions for the use of one person. The houses were usually positioned near a sanatorium or a health association, but there are also examples of TB-huts on private property. The TB-huts could be rented or bought (newly build). People even bought them via advertisement in the newspaper.

Around 1945 an effective cure for tuberculosis was found (streptomycin). The mortality rate dropped dramatically. Therefore TB-huts were no longer needed. A lot of them were used as a garden house or shed, and degraded over time. Only a few TB-huts made it into the collections of Dutch Museums. One of these houses is on display at the Open Air Museum near Arnhem. The house was originally located near the Green Cross Association in the Dutch village Olst. The Green Cross was an Association which specialized in home nursing and provided public information about pandemics.

Although these historical houses are not in use anymore, newly made replica’s are for sale nowadays. These houses are marketed as a place to find peace. In the video provided by ‘TBC-huisjes’ you can see that it’s also marketed as a cabin to meditate and do yoga. These mindfulness-practices fit right in with the wellness-trend of todays society.

By being relics of the past, put on display in museums and being offered for sale to function as a sort of garden house, you would think that tuberculosis is something of the past; a disease which we’ve cured like the measles and the smallpox. Although TB is curable, the WHO estimates that worldwide a total of 1.2 million people died of TB in 2020. Even though there is hope for effective treatment for everyone, Multidrug Resistant Tuberculosis is a real problem. Also, the recent discovery of a non-curable variant of the disease in India is reason for real concern. Due to Covid, the accessibility to treatment is reduced and the number of TB-patients has increased.

In this respect the TB-hut is more than a tiny house. It is inseparable from a horrible deadly disease. In the past people would self-isolate in TB-huts, in many cases waiting for a horrible death to come. Although the houses are not used to that end any more, they remind us of a still deadly disease that is, unfortunately, far from over.