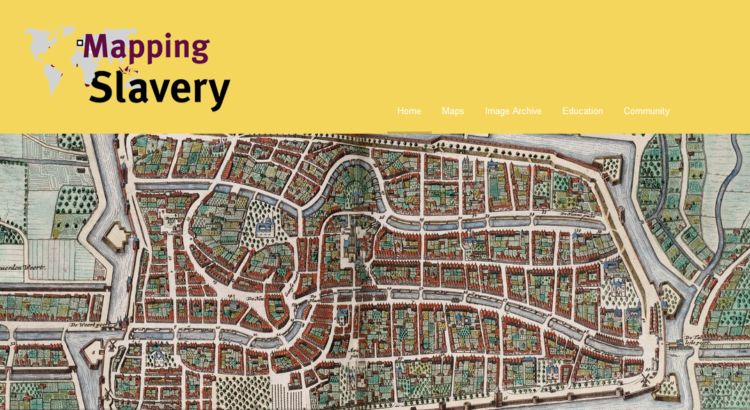 It looks just like a regular old house in Leiden, the house on the Oude Singel 118. Maybe a bit bigger and more decorated than its neighbours, though nothing special for a house in the once thriving city of Leiden. I must have passed it many times without noticing it. But this particular house does have an intriguing history: from 1708 it was owned by the plantation owner and fabric merchant Daniël van Eys. He owned two slave plantations in Berbice, a Dutch colony on the north coast of South America. One of these plantations was named ‘Magdalena’ after his mother and daughter.

“It happened somewhere else”

This was one of my findings after browsing an afternoon on the website Mapping Slavery. Mapping Slavery provides interactives maps of cities in The Netherlands, The US and Indonesia where traces of slavery are linked with specific locations. The project was initiated in 2013 by Dr. Dienke Hondius at the Vrije Universiteit Amsterdam, aiming to include the history of Dutch slavery trade in the local history of the Netherlands, the US and Indonesia. As current project manager Nancy Jouwe said in an interview with the NOS: ‘Firstly, you hear a lot of people say that it “has been a long time ago” and secondly “it happened somewhere else: Suriname, Indonesia, South Africa.” Therefore, Dutch people do not see it as their own history. We want to challenge that idea. You can also find [traces of slavery] in Groningen, also in Friesland, in Middelburg or Brabant, not only in Amsterdam.’

Because of the scope of the project, Mapping Slavery works with as many as 37 national and international partners. A few of the main partners are the Vrije Universiteit Amsterdam, Black Heritage Tours and Kosmopolis Utrecht. The project is mainly funded by Dutch partners, like the Mondriaan Fonds, the Prins Bernard Cultuurfonds and the Municipality of Amsterdam, but also by international partners, such as The Netherlands-America Foundation.

The website of Mapping Slavery looks neat and clear. It is written in Dutch, English and Indonesian, although many parts of the site are only available in Dutch. The most important part of the site is the section ‘Maps’ where the interactive maps of different cities can be found. I went to the page about Leiden, the city where I am currently living. Every page begins with an short historical background of the relation between the city and slavery and I learned that Leiden ‘was merely a small player in the triangular trade’, though was still connected to the slavery past. The map itself shows markers in different colours which, when clicked on, show the information of the specific location.

There is a lot of interesting information in the map. Apart from the fact that I live close to a plantation owner from the 18th century, I’ve learned that Leiden University had the first and only Caribbean rector of the Netherlands and that the Moriaansteeg is named after black people. Still, all this information felt just like shreds of history: though I read a lot of information, I was missing the bigger picture of how Leiden was related to slavery. For example, the map doesn’t show an overview of how many plantation owners or abolitionists lived in Leiden at a specific time and how this changed over time. Another downside of the map is that it isn’t very user friendly, as there is no legenda explaining the meaning of the different markers and it’s hard to browse through categories. Therefore, I think that the maps are good research tools for people who are interested in specific locations, but that the lack of historical context and the fact that it’s not very user friendly, makes it less suitable for the broader public.

Luckily, Mapping Slavery has tought about the broader public too. When navigating to the ‘Education’ section of the website, you can find a wide range of products and activities concerning slavery in the Netherlands. There are podcasts, videos, black heritage walking tours, an education website, and guides about slavery heritage in different cities. Especially the guides have received a lot of media attention and have reached a broad audience. For example, the Amsterdam Slavery Heritage Guide was already sold 5000 times in 2017 and recently, a second edition has been released. Another guide that sold well was The Netherlands Slavery Heritage Guide, showing a hundred locations in The Netherlands with connections to slavery. Esther Captain, researcher for the KITLV1 wrote for the Geschiedenis Magazine that ‘The slavery heritage guides offer a form of heritage tourism that doesn’t necessarily require you to travel far, but being a comfortable tourist isn’t an option. What might represent a once glorious history of the Netherlands for some (…) is a painful history for others.’

In conclusion, Mapping History is a great project for creating awareness of the history related to slavery around us. By making use of a wide range of public historical activities and products, a broad, international audience is reached, giving many people the opportunity to discover more about their local history. For me, the project has made me look more closely to the houses when I walk on the Oude Singel in Leiden. Now I realise that any house could’ve been inhabited by a plantation owner, an abolitionist or a trader in colonial goods. Knowing this makes the history of my city even richer.