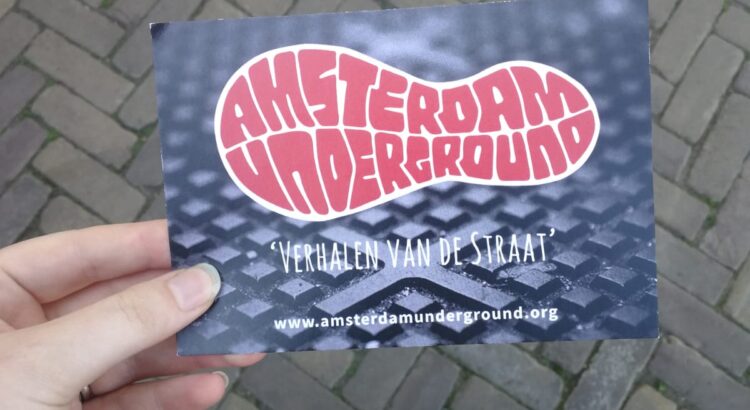 Have you ever wandered through the Amsterdam Red Light District and wondered how these people came to work there? Or maybe you have felt hesitant to approach a homeless person in your city even though their story intrigues you. This interest in life at the bottom of the social ladder is completely normal, since it can be hard to relate to someone in a situation so unrelated to your own. If you are fascinated to learn more about a completely different and maybe dark side of Amsterdam instead of the usual touristy spots, Amsterdam Underground is definitely worth taking a look at.

Amsterdam Underground is a social initiative of De Regenboog Groep, a foundation that aims to make Amsterdam feel like home for those living in social poverty. This can include anyone from (ex-)homeless people to (ex-)drugusers or those struggling with psychiatric problems. De Regenboog Groep tries to help them participate in society with a wide range of exciting projects, of which Amsterdam Underground is one.

Amsterdam underground combines the cultural tourist world, history and the expert knowledge of the city coming from those who have experienced all facets of street life firsthand. In 2011, this project started as a means to give (ex-)homeless and drugusers a useful way of spending their days. In Amsterdam Underground they get the chance to volunteer as a city guide in Amsterdam. During these walks, participants get to hear the personal stories of the guides. Not only does this give the guides a platform to connect with society, it also enhances their own sense of self-worth and independence. People who have experienced addiction and homelessness often have mental health challenges. Being able to share their story in a professional and fun setting helps them to process this and improve their mental health.

Soon, their tours started to become more well known in public media, which led to a huge increase in participants. In 2019, De Regenboog Groep decided to establish a corporation in which the guides got more input and an actual salary. The guides are the main directors now, even though they still get support from De Regenboog Groep. Their profits are used to help walk-in-houses for homeless people.

Reading about this project intrigued me, so I booked a tour to learn about this ‘darker’ side of Amsterdam first-hand. Upon arrival, I immediately noticed that Amsterdam Underground attracts different participants than just the average tourists. By presenting such a specific topic, it actually becomes interesting for the locals as well. Which is great, since this brings their stories to an even larger public. At last, a tour for those interested in more than just the Rijksmuseum, the Royal Palace or Madame Tussauds.

Since each guide brings their own specific story and background, each city tour tells a new story about the history of Amsterdam. This project can therefore be seen as an intriguing form of public history. During their tours, you are brought back to life in Amsterdam at the end of the last century, sometimes even with the help of a few photographs. Living on the streets of Amsterdam was rough. The stories that the guides share with the participants are often personal, which gives an extra layer of meaning to that part of the history of Amsterdam. For example, while walking through the small alleyways of the Red Light District of Amsterdam, tour guide Sonja Groot Obbink openly shares her experiences with street prostitution. I also got to know how you get money, alcohol or drugs when you are homeless and addicted. During her story, she explains the differences between the district at the end of the 1980s and now, actively linking past to present. Sonja also did an interview for the Vice documentary ‘Achter de Wallen.’ Of course, homeless people could be found in more neighbourhoods than just the Red Light District. The Indian Neighbourhood, for example, was a hotspot for drug users. However, most of this happened behind closed doors, making it less interesting for the visiting public. That’s why most of the Amsterdam Underground tours take the visitors on a journey around ‘de Wallen.’

The project has had a huge impact on both the guides and the participants. Not only does it improve the mental health of the guides by having to open up about their experience surviving on the streets, it also helps to stop the marginalisation and prejudices often associated with the homeless, sex workers and drug addicts by allowing them to share their stories first-hand. When I asked Sonja if she felt that this initiative has helped her, she told me:

Amsterdam Underground gives us a chance to get to know a side of urban history that has so far mostly been ignored due to stigma. This goes to show how important the role of cultural projects in and outside of museums is in order to address social issues and support mutual understanding between marginalised groups of society and the broader public. These kinds of topics should not be avoided but normalised. The tour guides mostly just want to create understanding for those who were unfortunate enough to end up on the streets. It can happen to anyone, so the least you can do is give them a smile or a chat every once in a while. I know I will.