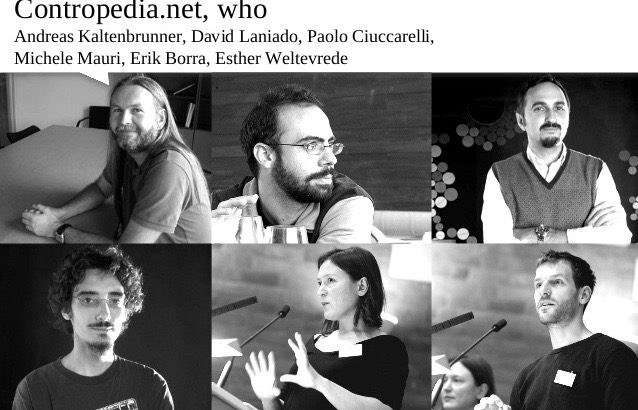 Wikipedia it is the largest platform for societal controversial content and also the sixth most trafficked website, that is exactly why Erik Borra together with other researchers choose this website as their experimental field. Their article ‘Contropedia – the analysis and visualisation of controversies in Wikipedia articles’ describes the on-going project Contropedia. In Wikipedia, Borra argues, collaborative content creation inevitably reaches situations where different points of view lead tot conflict. The Contropedia project aims to build a platform for the analysis and visualisation of these controversies in Wikipedia. The project wants to provide a better understanding of socio-technical phenomena that take place on the web by going beyond the mere identification of controversial pages through studying the controversies within an article in more detail.

The researchers of the Contropedia project believe that their project is useful in a number of ways. The following are the two most important. First, Wikipedia is one of the most prominent examples of collaboration online and conflicts often reflect larger societal debates Borra and his fellow researchers state. So, by mapping the controversies in Wikipedia articles one can find out more about the larger debates that occur in society. Besides that they believe, as they explain in their conclusion, that Contropedia, as an implementation of controversy mapping, provides an elaborate toolkit of social life as it unfolds on Wikipedia.

I agree with the first statement. Nowadays larger societal debates do frequently translocate to the Internet. Here everyone can participate in the debate, can say what he or she wants and even stay anonymous if desired. We can think here about the debate in The Netherlands about ‘Zwarte Piet’ being racist or not. Several Facebook-pages were created around this debate and a quick look on the ‘Zwarte Piet’ Wikipedia page shows but eight subsections about objections against, and discussions about the tradition of ‘Zwarte Piet’. The ‘Zwarte Pieten’ discussion is a good example of the way a conflict on the Internet can reflect a larger societal debate as stated in the article on Contropedia.

On the other hand I firmly doubt the second statement of Borra and his colleagues about Contropedia being useful in providing a toolkit of social life. I strongly believe that the way controversies in Wikipedia articles or debates elsewhere on the Internet are being fought are not accurate representations of the way controversies and debates take place in social life. As I stated earlier, when societal debates move themselves to the Internet, all of the sudden everyone can participate. You create a Facebook account and can say whatever you like about anything or anyone; the same applies for Wikipedia. All of this you can do, so to speak, in the safe environment of your own living room. And, let’s be honest, everyone dares to say much more in his or her own living room than outside of that safe space. How many of the people who participate in online debates would participate in a debate if it took place in real life? I think it’s only a minority that dares to stand up for their own opinion in this situation. This is why I cannot agree on the view of Contropedia providing a toolkit of social life.

Accessibility of the Contropedia project

In the articles conclusion Borra and his fellow researchers come up with an interesting way of using Contropedia ‘for the citizens wishing to be better informed, and for society in general’. They argue that access to Contropedia will help to build a greater trust in the online encyclopedia as well as to make its limits explicit. I think this is a very noble idea. Knowing the limits of a website like Wikipedia is an important issue in the Digital Public History field. But I am also wondering how many ‘citizens’ actually will access the Contropedia website and if they do how many of them will get the message of Borra and his fellow researchers. There has already been written a lot about Wikipedia and its possible limits. For example on blogs, in online newspaper articles and on online learning websites readers are warned for the shortcomings, but also told about the benefits of the online encyclopedia that Wikipedia is. I do not think that Contropedia really ads that much to this message. A better idea to make Contropedia relevant for citizens and society in general I think would be to write an article about the project aimed at a wide audience with a reference to the Contropedia website. So that the people who have the wish to be better informed can visit the website.

I think the Contropedia project is an ambitious (sometimes maybe a little to ambitious) project that maps a facet that is very present in Wikipedia, namely the controversies within an article, in a detailed way. But I would not say it’s a useful project for everyone. But enough talking from my side, go checkout the project for yourself and tell me what you think!