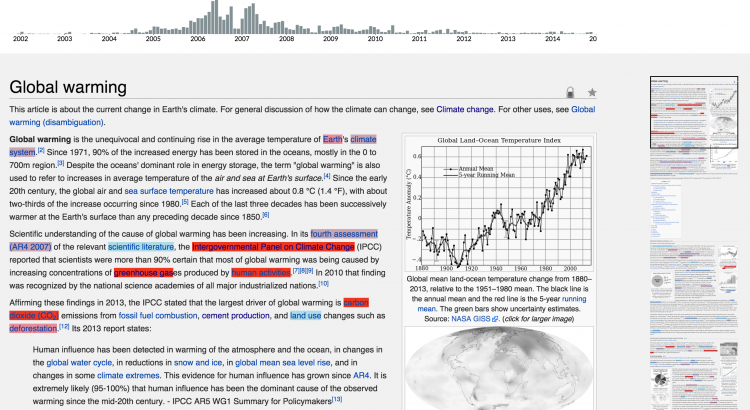 “Reference works, like Wikipedia, often inherit the conflicts of the external world they seek to document and are being seized upon as exemplars of, and proxies in, those debates.” (J. Reagle)

In 2014 Erik Borra, Esther Weltevrede and other researchers presented Contropedia, a tool that augments Wikipedia articles and offers insight into the development of controversial topics in this online encyclopedia. By analysing the wiki links in the edit history of Wikipedia articles, Contropedia identifies which topics within an article have been the most controversial and when. The developers are strongly convinced of the usefulness of their tool for both social researchers and Wikipedians.

Nowadays, Wikipedia is a vast online collaborative environment, to which any reader can contribute. Besides the fact that everyone is able to adjust the content of the pages, the changes and edits made by contributors are also made available and visible for later visitors on the ‘public edit history section’ and the ‘discussions section’. In this way, it is possible to highlight the development of an article. This form of participation resulted in a successful and popular website. The exponential increase of both users and articles has led to a tremendous and sustained growth of the website. Although most of the content is of good quality, the online encyclopedia also deals with vandalism, inaccuracies and users’ disputes. However, conflicts are inevitable when such a large-scale co-operation takes place. These conflicts in online communities are a complex phenomenon and can be approached and examined in different ways. Borra and the other researchers point out two interesting aspects. First of all, they state that the conflicts occurring on Wikipedia reflect larger problems and omnipresent disputes in our current society. Secondly, the study of conflicts could lead to the achievement of a consensus, the clarification of difficult issues and the reinforcement of common values.

Contropedia is not the first tool that uses Wikipedia as a source for research into social developments, online collaborations, behaviours and conflicts. However, other studies rather focus on the dynamics between different editors while not offering any quantitative analysis. Contropedia on the other hand, is a tool that reuses the edit history in order to identify the controversial topics, as well as the degree to which something is controversial within an article. The tool provides two visualizations: an overlay indicating which issues are controversial and why; and a dashboard ranking subjects according to ‘controversialness’ and showing how the controversy has developed over time.

Questions can be raised about the utility of the tool for Wikipedia users. When and to what extent will they use this tool? In my opinion, Contropedia should be considered as a single tool in a large toolbox. Moreover, I agree with the developers’ argument that the tool can be used in a larger study on the social life on Wikipedia. I believe that this tool constitutes a starting point for the development of analytical methods for the study of larger problems and disputes omnipresent in our society today. However, it is essential that Contropedia is used together with other research techniques and analytical methods. Only then it will become possible to discover the story behind the controversies and to study to what extent the conflicts appearing on Wikipedia are a reflection of larger debates in society. Contropedia answers questions such as who, what, where and when. The why-questions, on the other hand, remain mostly unanswered. In order to understand the bigger picture, researchers need to let go of their focus on the Wikipedia community. In this way, the use of Contropedia can lead to achieve agreements on various topics, to clarify ambiguous arguments and to give different parties a voice. Only under these conditions this tool will prove useful, not only for researchers, but also for Wikipedia users.

Note: the header image shows controversial issues in the article on global warming. The image is property of Contropedia and can be found on their website.