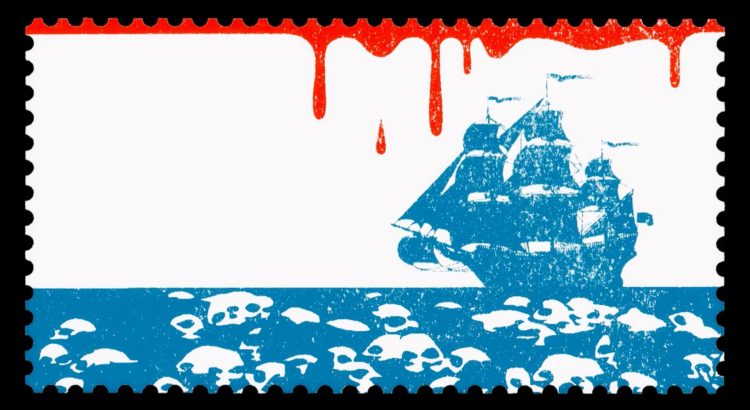 Strolling through the aisles of the supermarket, semi-bronzed legs in shorts and my thoughts on the last week of summer. I stop to be embarrassingly pleased by the sight of pepernoten. This delicious treat appears earlier every year and so does the debate around Black Pete, the controversial right hand of Saint Nicolas, to whom the holiday of Sinterklaas thanks its name. This won’t be an essay about whether or not to change or entirely erase Black Pete from the festivities. This will be an essay about the way people talk about diversity, ethnicity and controversial history. In particular the way rappers of the record label Top-Notch have been working on opening up the debate in co-operation with ‘amateur‘ historian Ewald Vanvugt over the last year.

Why is it that a book like Roofstaat, that has been spoken about in two of the most popular talkshows in the Netherlands and had a release party in Paradiso, ‘the temple of popmusic’, has almost exclusively been commented in popular media? Do academic historians have nothing to say about this book on the colonial heritage in the Netherlands? Or is it because historians, like the curators from N. Elizabeth Schlatter’s article ‘A new spin. Are DJ’s, rappers and bloggers ‘curators’?’ have their concerns about the expansion of their profession among non-historians? In this article, Schlatter concludes that all sorts of (young) people, call themselves or are being called ‘curators’. Many professional curators, but also historians, see this as a threat and are trying to protect their area of expertise. But she also cites Jim Richardson, who says: ‘I don’t think the term ‘curator’ means a great deal to these young people, but I think the act of curating does mean something. It helps them to say to the world who they are.’

And that is exactly what the rappers in this project are doing. For the people that are easily scared by 734 pages of annotated history, Top-Notch has also released a series of documentary video’s on Youtube about what it means to be Dutch, about social media comments on ethnicity and a videoclip in which rapper Typhoon plays the role of a slave. The rappers are trying to show the world who they are, that they are learning more about where they came from and conclude that everybody who has a passport from the Netherlands, is allowed to call themselves Dutch, not only the people that can identify with the white-dominant-his-story.

The book, the videos and the music will be supported by an educational tour in which these rappers will tell about controversial colonial history in high school classrooms. I think it’s fair to say that Ewald Vanvugt and the supporting musicians, like curators, make ‘selections or recommendations in an information and image-saturated culture’. Because of that, the entire project can be seen as an exhibition, both analog and digital, on Dutch controversial history and the way this has its effects on Dutch society nowadays.

I believe a project like this has an important message and is able to reach a far broader public than an exclusively academic historian can ever accomplish. Because of that, I feel ethically obliged to turn a blind eye to the scant critics that the book doesn’t have enough structure and is not critical enough about all the sources. The total amount of views of the videos is 236.445. The first edition of the book Roofstaat was released on march 15th this year and was sold out within a week. Up to four new editions have been released after that. The subtitle of the book is Wat iedere Nederlander moet weten (what every Dutchman has to know), and that exactly is what the project aims for. The writer and rappers, like curators or historians, are trying to spread awareness among a broad public and they are succeeding in doing so. Are they ‘robbing’ historians or curators from there jobs? Maybe. Is this a bad thing? Not necessarily, ‘since contemporary curators bring other skills to the table.’ (Schlatter 2010) When noticing these other skills; read the book, watch the videos or listen to the music, even a ‘professional’ historian has to acknowledge the contribution this project can make in the public debate.

Curious about Roofstaat? Use this link to download the first chapter!