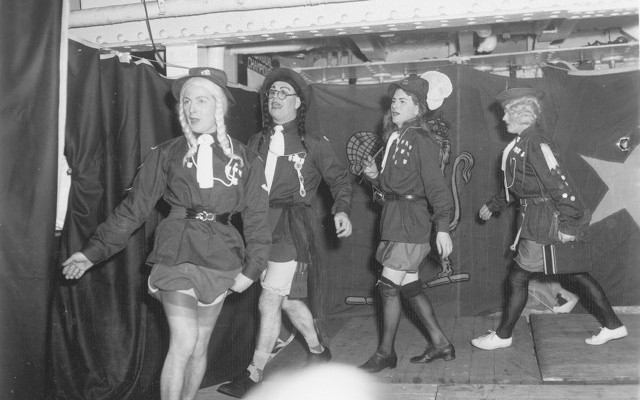 Anthony Tibbles does not like to leave shots unfired. In his article “Hello Sailor! How marine museums are addressing the experience of gay seafarers”, he gives a thorough breakdown of the problems with representation in maritime museums. The histories of women, queer people, and slavery have been largely untold. Only recently have maritime museum begun to make strides to change this situation.

The main subject of the article is queer representation, and why it is so difficult to bring these stories into museums. This goes from laws – like the UK’s 1988 Local Government Act, “which prevented authorities from ‘promoting’ homosexuality”¹ – to the museums themselves. Institutions are wary of bringing in subject that could be controversial in a negative way, or fail to include stories out of (wilful?) ignorance. They tend to lack a network that opens queer histories up to them, and an attempt to build such a network in 2006 was not successful.

But Tibbles identifies a scarcity of object relating to queer histories as one of the biggest problems for museums. How to tell a story if there is no object to link it to? Most clearly identifiable queer object are recent, from after the decriminalization of homosexuality. And even then, Tibbles argues, a lot of objects do not “specifically illustrate their sexuality of lifestyle.”² Personally I have to wonder how bad this is exactly. There is an obligation to tell the stories of queer people, but the fact that you can tell those stories based on a perceived non-queer objects can send a powerful message. On the other hand, you also need to acknowledge that queer sexual activity was criminalized for a long time, which can leave a negative taste to the total exclusion of object with a sexual flavor, marking them as shameful still. (A similar point can be made about queer spaces.) This means you have to make a very careful in making a decision in what you display in a museum and how you display it, and Tibbles himself was confronted with this problem when he set up the Hello Sailor! exhibit for the Merseyside Maritime Museum in Liverpool.

The exhibit was on display in Liverpool in 2007 and based on a book published by Paul Barker and Jo Stanley. The book, Hello Sailor! A Hidden History of Day Life at Sea (2003), is about the life of crews on board of cruise liners in the mid-twentieth century. Due to changes in hiring policies, they were able to semi-freely live their lives on board. The makers of the exhibit made a very clear choice to not include materials of an explicit sexual nature, instead focussing on life on board while not shying away from a discussion about the prejudice faced by gay men.³

I think this is a good way to balance the problem I described above: it offers a full display of lifestyle and does not shy away from the prejudice these men faced. These men had shared their experiences orally – often published with an assumed name -, and this posed a big problem for how to exhibit their stories. The main storyline of the exhibit ended up being carried by a series of graphic panels. The panels showed pictures and text, and were supplemented with, for instance, audio recordings. Transcripts of these recordings can be found on the website that accompanies the exhibition. But the centerpiece was the reconstruction of a cabin, with its walls covered in pin-ups of shirtless Paul Newman and Charlton Heston, a portrait of the Queen, and Judy Garland as Dorothy.

You can see stockings and dress in the closed, a reference to the private drag and cabaret shows that crew put up for each other. Concert programs and home-made posters for these shows were also on display, but that seems to have been the full extend of objects. More was simply not available to the makers of the exhibition.

An addition to the exhibit was made in the form of a solo theatre piece, with an actor playing a sailor changing out of his show costume and back into his sailing clothes while talking about his life. This performance, as well as the rest of the exhibition, was very well received by visitors. The exhibition went on to successfully tour four other museum on both sides of the Atlantic.

Personally I can only hope for a similar exhibition about queer women. I propose lesbians in the American Army as a subject.