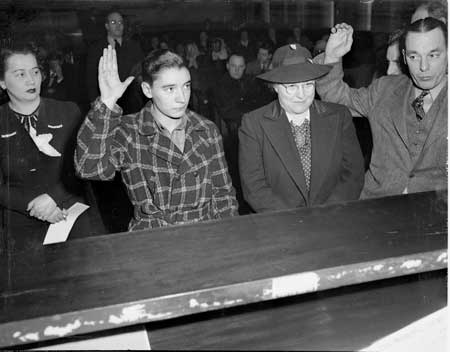 Not surprisingly, conservative activists have been protesting over illicit material in the museum for al long time. Most famous is the Robert Mapplethorpe exhibit in 1990 in the Contemporary Arts Center in Cincinatti.The exhibit that showed Mapplethorpe’s lifework, resulted in the first time in history a museum and a director were charged criminally for obscenity because of a public exhibit. London’s Tate Modern had to remove naked Brooke Shields pictures after a police visit back in 2009, because the picture of the 10 year old could break obscenity laws. Furthermore, in the 2010 exhibition Hide/Seek: Difference and desire in American Portraiture, displayed in the National Portrait Gallery, protesters claimed that AIDS activist and artist David Wojnarowicz’ piece “A fire in My Belly” did not belong in a federally funded institution, resulting in the removal of the object from the exhibition.2 Out of fear for similar protests, the curators of CHM decided to remove the lesbian-produced object, The Wheel of Debauchery from the exhibit. Only sexual in textuality and visually unobtrusive – depicting neither images of erotic practice nor significant profanity, The Wheel was replaced after struggle over what it would mean to depict lesbian sexual practices. Other choices in the materials for the exhibit reflected CHM’s hessitance in displaying the sexual illicit as well.

I would say it’s a shame that out of fear for backlash the Wheel of Debauchery eventually wasn’t displayed in the exhibit. Erotic practices in the museum are by no means a recent phenomena. Criticism of displaying illicit material in an LGBT exhibit is in fact very much hypocritical because traditional art museums do show sexual objects, with the difference that it’s looked upon as “culturally respectable”. And it’s not only heterosexual objects these museums show. As a matter of fact The British Museum purchased the Warren Cup, a silver drinking cup with two images of male same-sex acts, for 1.8 million pounds in 1990 – making it the most expensive single purchase by the museum at that time. You can look for yourself, but I would say it definitely checks the boxes of sexually explicit material.

Going back to the Wheel of Debauchery, instead of removing The Wheel and other ”illicit” objects altogether, there could have been the possibility to create an online space for the objects not seen as fit for the physical exhibit. Just as The GLBT Historical Society has online exhibitis, there could have been an online exhibit linked to the museum. Especially for the LGBT community this would have been a great way to have access to objects they think should be out there to tell their history.

The most important case for displaying queer sexual practices is that there’s a need for museums to invest in LGBT history. By understanding the impetus for creating and maintaining queer community history in museums, curators can use this knowledge to foster more reflective practices to be more inclusive in their research practices through outreach and collaboration. Furthermore, debate about the normative heterosexual gaze in art should be stimulated in order to create a more inclusive spectrum of experiences. The examples in this article are just a few of many ways of displaying queer sexual acts, not just in the physical sphere but also digitally, that could contribute to a broader history.