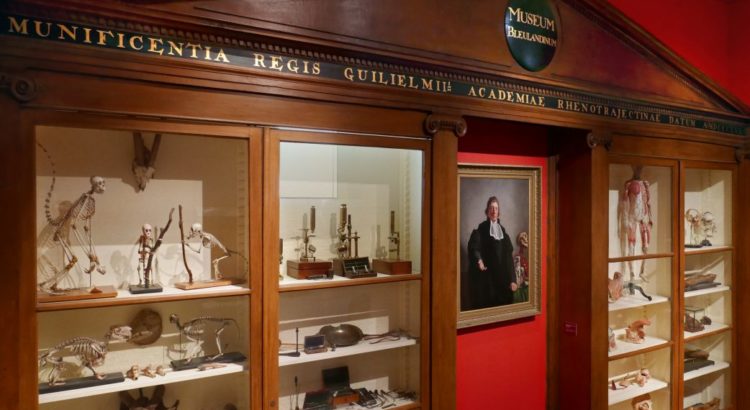 “Quiver with horror at skeletons, organs, foetuses and body parts in formaldehyde!”

This caption at the website of the Utrecht University Museum refers to the Bleuland Cabinet, home of the private collection of physician Jan Bleuland (1756-1838). Bleuland lived in an age of change. The development of instruments and technics, in which the physician himself played an important role, led to new insights in medical science. Bleuland collected a fair amount of human body parts, which he preserved and used for research.  A part of this significant collection is still being displayed in Bleuland’s original wooden Cabinet at the University Museum, where I got to speak with one of the conservators, drs. de Raat.

THE HERITAGE OF BLEULAND
While Bleuland’s collection was donated to the University of Utrecht by King William I in 1815 to encourage research and education, the Cabinet has only been incorporated in the University Museum since its opening at the Lange Nieuwstraat in 1996. Apart from reorganisations of the objects within the Cabinet and the adding of interactive touchscreens, the presentation of Bleuland’s heritage has stayed the same ever since.

This is not surprising if you are aware off the mission behind the Bleuland Cabinet. The objects are intended to stimulate the public’s curiosity and fascination for the human body in the same way that Bleuland himself got so invested in this topic: by looking very closely at human body parts. The exhibition should make visitors feel like the physician himself could just walk through the door to have a look at his collection. Everything in the Bleuland Cabinet is about him: his portrait hangs prominently in the centre of the room and the Cabinet is stuffed with skeletons, organs in alcohol, foetuses and instruments, just the way Bleuland left it when he died.

One of the first things I noticed during my visit was the complete absence of text. Drs. de Raat nods consenting when I ask her about this: “Bleuland didn’t have any signs inside his Cabinet, so we chose not to make use of them as well. The focus should be entirely on the objects themselves. Signs would only lead away attention from the esthetical and historical feeling we want our visitors to experience.” The touchscreen, however, offers the possibility to learn more about the Cabinet as a whole or about the objects themselves.

“ONLY FOR THOSE WITH A STRONG STOMACH”
The absence of text, however, causes a problem. While most children press their noses up against the glass in fascination, I can understand that some people might feel upset when they encounter the babies in bottles (of which the museum has a decent amount). It is, therefore, very important to contextualise these objects and notice that all human remains were used by Bleuland not out of morbid curiosity but for educational purposes. From the seventeenth century onwards, collecting and conserving body parts, such as foetuses, was the only way to study the mysteries of the human body.

This is something we easily forget in our digital society and it is crucial to remind visitors about it. Drs. de Raat explains that she has seen a change in the way people think about human remains on display. When the Bleuland Cabinet opened its doors for the first time in 1996, such a discussion didn’t exist. The debate only emerged some years ago and shows the growing need to make visitors aware of the context in which Bleuland collected his anatomical body parts. One way of doing this is by using ‘ethical disclaimers’.

While some lines as ‘Quiver with horror’ and ‘Only for those with a strong stomach’ have been put up on the museum-website, it struck me that in the Cabinet itself disclaimers are nowhere to be found. A short explanation about the reason Bleuland collected is available on the touchscreens, but apart from that, not a word is spoken about it. This is a great loss, because I feel that visitors, in this way, will not be able to understand the purpose and importance of Bleuland’s heritage. Drs. de Raat tells me that the reason ethical disclaimers are not (yet) part of the exhibition, is that the museum will soon close for renovation. The museum wanted to add disclaimers of some sort sooner, but because the renovation has been delayed multiple times, dealing with this problem has been put off.

Only the guided museum-tours pay attention to the issue by asking about the reasons why Bleuland could have started his collection. Guides then put this into perspective and explain that, for Bleuland, collecting babies in bottles was the only way to educate his students and that some babies were even given to him by the family out of gratitude. However, visitors who are just ‘passing by’ will not be given this significant piece of information.

SOMETHING TO THINK ABOUT…
The renovation offers opportunities to think about a new way in which Bleuland’s collection can be displayed, in which both the authentic feeling and the importance of addressing the ethical side of the collection, play a major role. Drs. de Raat ensured me this will be a main point of focus. The museum is not quite sure about in which format this will be, but one of the ideas is to enable a ‘zooming-function’. This interface will be an upgraded version from the one that is already available and will zoom-in on the importance and meaning of one specific object. The museum is also looking at the way other museums are dealing with ethical disclaimers and is, for instance, reaching out to the Museum der Charité in Berlin.

One thing that is certain, is that text signs in the Cabinet are still out of the question. The possibility that Bleuland could enter the room at any moment, will remain and should mainly encourage the public’s curiosity for medical science. In this, the Utrecht University Museum has (already) succeeded: even I – a blood-fearing history-student – got a bit more fascinated by the mysteries of the human body. So I will definitely come and see the updated Cabinet after the renovation!

NB: After I published this blogpost, drs. de Raat told me that she was not aware and shocked about the fact that the Bleuland Cabinet is introduced on the museum-website with the line “quiver with horror”. As she finds this an inappropriate way to address the exhibition in such a sensational way, she is going to make sure this line will be removed from the website.