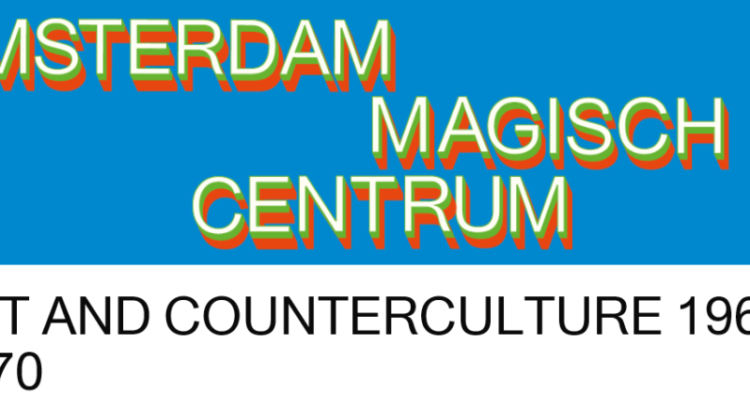 Like many other cities, Amsterdam likes to cling to the time when it was the centre of the world. In the exhibition ‘Amsterdam Magisch Centrum (Amsterdam Magical Centre)’ this centre position, for once, is not situated in the seventeenth century Dutch Golden Age, but in the rousing sixties. It was the artist and well known provo-member  (a Dutch counterculture) Robert Jasper Grootvelt who declared Amsterdam to be this magical centre. From all over the world, so the exhibition main introductions text and the exhibition’s website tell us, youngsters traveled to Amsterdam. In Amsterdam, things were happening in the late sixties and many wanted to be a part of this magical environment where almost everything was possible.

In accordance with the exhibition’s subtitle, ‘Kunst en tegencultuur 1967-1970 (Art and counterculture 1967-1970)’ The Stedelijk Museum Amsterdam looks back on the different facets, that fifty years ago, made this city such a vibrant place to be. In collaboration with the Rijksmuseum and the Internationaal Instituut voor Sociale Geschiedenis, the Stedelijk Museum has created an exhibition that brings different art forms and social history together. The variety of objects that are displayed consist among other things of pamphlets, photographs, digitized video footage, magazines and art-installations. In this exhibition these objects compose narratives about revolutionary ideas concerning art and social issues like female rights, housing shortage and sexual relationships. Art projects like Waterwalk – a floatable object in which one can walk on water -, a manual for squatters and the erotic magazine Gandalf, shows the visitor that indeed Amsterdam was the place where the magic happened.

Different museum texts offer the necessary historical knowledge and information about art culture to indicate these objects. But for those who want to get more out of their museum experience, the Stedelijk Museum offers a free audio tour. The audio tour consists of eight fragments and is also available online. Each fragment starts and ends with upbeat sixties music which evoke the feeling that you are right inside and part of the magical centre. In most of the fragments one listens besides the omniscient narrator, to various other people who are concerned with the room’s theme, and some fragments contain original sound recordings. Besides curatorial authoritative voices, such as Rijksmuseum conservator Harm Stevens, the audio tour uses voices of people who have experienced the late sixties in Amsterdam themselves. For this reason the audio tour could be considered an example of oral history. It tells the stories of people who were there. Artist Iris de Leeuw tells about the art collectief Luuks Laboratorium and the suits they produced, Artist Tjebbe van Tijen tells about an exhibition on the 1968 student uprising in Paris he contributed on and Dunja Verwij tells about the time when she was strictly involved in Dolle Mina (a Dutch feminist group).

These emblematic examples show that the oral history that appear in this audio tour is not the kind of oral history that gives voice to formerly neglected people. So although the audio tour offers a wide and tenable variety of speakers, it seems fair to say the voices we hear, belong to the somewhat higher classes of society. In addition, the audio tour could be perceived as ‘associated with institutional authority and [a] mechanism used to control knowledge and its consumption’. This interesting perception of media tools, brought up by curator Gwyneira Isaac, seems applicable to this audio tour. The audio tour, therewith the curator, and therewith the museum, decides who’s voices guide you through the exhibition. Like in many audio tours, the curator and the museum decides who speaks and who does not.

It would be interesting, and for this exhibition quite suitable, to develop an audio tour at which the museum visitor can make his own choices. When for example the audio provides a narrative about the upcoming squatters movement, the visitor could be given the choice to listen to A: an artistic squatter who supported the movement, B: a working-class man or woman who rejected the movement, or to listen to both. This kind of additions could make the audio tour more socially divers and the visitor can decide for himself which voice or voices speak to him. Of course generally, it would still be the curator and the museum who assemble the audio tour so even such a multiple-voiced tour would in a sense be the curators choice. But at the same time, it would give the visitor more control about the knowledge he receives.

Since the Stedelijk Museum is chiefly considered as an art museum and to lesser extend as a historical museum, the choice to include a lot of artist in the audio tour is evident, but also a bit exclusive. In an exhibition like ‘Amsterdam Magisch Centrum’, an exhibition that is obviously strongly connected to social history, a more inclusive, multiple-voiced approach would suit the audio tour very wel.