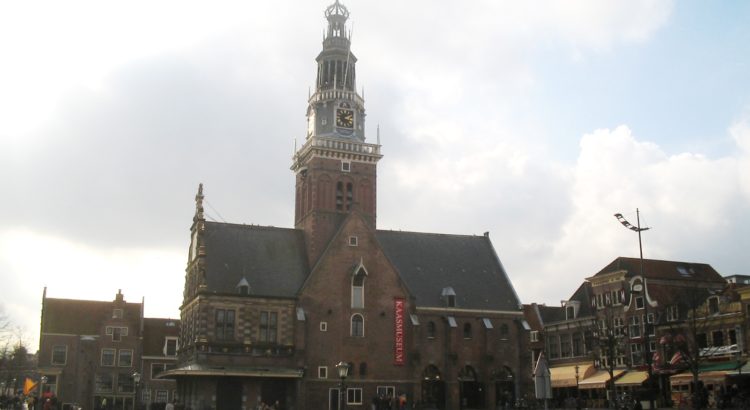 As a Dutchwoman with roots in Noord-Holland, cheese making is something that my ancestors, if they did not actually partake in it themselves, would at least have been very familiar with. The Hollands Kaasmuseum (Holland Cheese Museum) in Alkmaar is therefore a place I long felt I should visit at some point, and now, with the assignment to visit a museum with a digital project, the time was ripe. Because although the technique of cheese making is centuries old, the technology used to display it in this museum certainly is not. And that is what I want to review here: the use of digital tools in the Kaasmuseum, and more importantly, the effect they have on the interpretation of history the museum offers.

The digital project at the Hollands Kaasmuseum is relatively new. The museum, situated in the Alkmaar Waag was originally opened in 1983. However it was closed from the 1st of October 2013 until the 6th of March 2014, when it was reopened by the king. During that period, the museum was modernised with the aim of losing its old-fashioned reputation, and to make it more appropriate for this day and age. And change it they did, as it is hardly recognisable to visitors of the old museum, according to chairman Hip Breebaart. At the cost of 800.000 euros, paid by the city council, the province, the museum itself, and the companies Friesland Campina and Rabobank, a lot of digital tools have been added, though some more serious than others.

For there is a great variety in digital tools used to modernise this museum. As might be expected, there are games to be played on some of the large monitors placed all over the museum. One of which of course had to be the game boter, kaas en eieren (literally butter, cheese and eggs, but known in Anglophone countries as noughts and crosses or tic-tac-toe). These are very obviously aimed at a young audience, which is part of what this project was for, though the project leaders think the other digital tools will appeal to adults and elderly as well.

And that brings us to the more serious uses of digital tools in the museum. There is a mini documentary, which shows the transition from cheese making at the dairy farm to the modern-day cheese making in factories, there is footage of a farmer’s wife making cheese in 1955, there is a re-enactment of a day at a dairy farm, and then there are several monitors presenting information that could also have been on a sign. Apart from the 1955 footage, one could argue that these tools might prevent people from actually looking at the artefacts that are on display, which is a common fear when a museum switches to digital tools.

However, I would argue that the museum has been able to combine digital tools and engagement with artefacts in an interesting way. One of the monitors which on first glance seem to contain a game for children, actually informs us very much about the function of the artefacts displayed behind it. The ‘game’ lets the visitor make cheese themselves (virtually). It starts with a cask of milk and requires the visitor to touch (on the monitor) the next artefact that is used in the process of making cheese. When the correct artefact is chosen, a spotlight turns on to reveal real artefact standing just behind the monitor. This turning on of the spotlight with the corresponding option being chosen on the tablet is repeated in other display cases, and, in my opinion, works really well to combine the digital and the artefact to the visitors’ benefit.

Another change to the museum which was introduced during the same modernisation, was that the museum was given more structure. Before, the museum was said to be too messy, with artefacts standing around somewhat randomly. Nowadays, the museum has a clear idea of what it wants its audience to learn, which is the process of ‘van koe naar kaas’ (‘from cow to cheese’). And the digital tools available really support this aim. Besides the re-enactment of a day at a dairy farm, and the spotlight display from the previous paragraph, there is a real size fake cow with a monitor displaying its metabolism and the production of milk.

All this focusses very much on the practicalities of being a cheese maker, and leaves out other parts of history to do with cheese. This is almost ironic when one considers the location of the museum, which is the Alkmaar Waag. A Waag is a building where cheese that was being bought would be weighed. But this part of history, barely touched upon in the introductory video, is not mentioned again in the rest of the museum. The focus of the museum seems to lie solely with the production of cheese, right until it would be bought. Although this does raise, and not answer, more questions about how the cheese was then to be sold, to whom, and why it became so popular, it does correspond with what the museum has set out to do, which is to tell the story from cow to cheese. Only the very last room in the museum really changes the subject by making a connection to the present, world-wide popularity of Dutch cheese.

In the end, I think it is fair to say that the Holland Kaasmuseum gives a very good idea of the job of a dairy farmer and cheese maker. The telling of this story is very well supported by digital tools which are nicely incorporated into the exhibition. Though there are monitors with just a lot of information in them which could also have been on a sign, there are others which are really well used to support the artefacts on display and the story the museum wishes to tell.

For pictures of the inside of the museum: