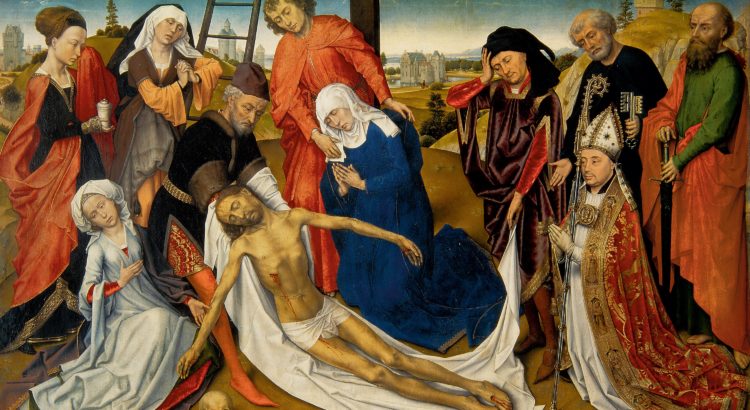 During a project that took place in the summer of 2018 in the Mauritshuis in The Hague, by itself a marvelous historical location built in the seventeenth century, the curators took us back to the Late Medieval period. In this exhibition, visitors get an insight into the process of painting in the fifteenth century. On display is the oldest painting owned by the Mauritshuis: ‘De bewening van Christus’, an altarpiece painted between 1460 and 1464 by Rogier van der Weyden (1399/1400-1464). This work is to be seen above this paragraph. He is now seen as one of the so-called Flemish Primivites, a group of painters known for their highly detailed depictions using oil paint.

In this exhibition, Van der Weyden’s painting was publicly restored. In one of the exhibition halls, a temporary workshop was built where museum visitors could witness the restoration work done by professionals. These professionals were at work during several hours each day. When they were not at work, the painting was still in the workshop. Their craftmanship was accompanied by a short movie about the painting itself, the professionals at work, and the process of restoration. You can watch the video underneath this paragraph. This work needed to be done anyway, but it usually takes place behind closed doors. This project makes the act of restoring a painting into a public exhibition. The process thus becomes the object. The Mauritshuis has done this kind of public restoration before, for instance in the case of ‘Het Meisje met de Parel’ by Johannes Vermeer in 1994. With this, the museum wants to involve their visitors in an important part of the work of a museum: the maintenance of and research on their collection.

National newspaper de Volkskrant reports on the exhibition, interviewing one of the restorers called Lieve d’Hont. According to her, their task is mainly behind the scenes, working in the shadow of the painting itself. The Volkskrant-reporter calls the exhibition a journey of discovery. Walking around, the viewer’s interest in the painting is sparked. BNR Nieuwsradio, a commercial radio station, and local news station Omroep West also report on the exhibition.

Before entering the workshop, the visitor walks through a room with parts of Van der Weyden’s painting printed on the walls. The panels stretch all the way to the ceiling. This room exhibits the results from the research and the restoration work. On the wall panels, you could read information on Van der Weyden’s course of life, his career, his painting style, and ‘De bewening van Christus’. As you walked through this room, looking up at the walls, you walk around a table full of displays situated in the middle of the hall. These displays are interactive, and show different aspects of the technical research. They show several layers of the painting through digital scans. These layers vary from infra-red, röntgen, and give an analytical view of paint samples. For instance, through the infra-red scan, you could see the initial drawing underneath the painting. The process of Van der Weyden can be uniquely followed. The viewer can pick which layer to examine, and can zoom in on any part of the painting. Because of digital tools such as displays, the viewer can explore this art work themselves, instead of looking at it from a few metres away. By giving the viewer a chance to discover in depth what the painting is made of, the curators give some insight as to what the restorers have to take into account. The visitor gets a glimpse of the craft of the restorer, but also the profession of the painter.

Through these displays, the viewer gets engaged in the painting process of Van der Weyden that took place almost 600 years ago. After just having read information on the painter himself and the historical context, the displays give you the chance to unravel the Medieval painting. One can imagine Van der Weyden first drawing the painting on the canvas, then applying the first strokes of paint, painting over his errors, changing his mind on the position of eyes, limbs, or hats, and finally applying layers of varnish. This way, the painting comes alive. It is not just an end result, but a build-up of paint, put on the canvas by a real person through his imagination and creativity.

In case of this exhibition, I see the digital tools used as vital to the experience. Without these tools, the viewing of the painting would be one-sided. The tools upgraded this museum visit to something that stimulated my brain. In a more traditional exhibition, the restoration work and its insights would be left to the professionals. Of course, images of the infra-red scans for instance could be printed on walls or panels. However, this would disable the viewer’s own process of exploration. By being able to zoom in, move, and switch to other layers, the viewer gets to choose when and how to view the painting. This gives the visitor a sense of  autonomy, bringing the painting closer, and giving an insight into the creative process of Late Medieval painter Rogier van der Weyden.