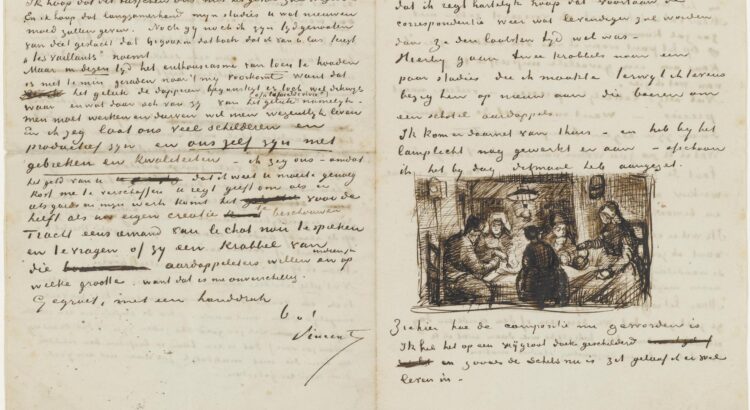 When asked about Vincent van Gogh, most people answer: he’s the crazy painter that cut off (part of) his ear, right? Although he’s best known for his work, his personal anguish comes a close second. We know a lot about his life because a great deal of the letters that he wrote have been preserved: 820. Most of these he sent to his brother, Theo, who wrote most of the 83 known letters Vincent received. In his letters Vincent not only shared sketches of his works, he also extensively described his thoughts and visions on his life and the world. These letters are central to the project I discuss here: Vincent van Gogh Highlights, the letters, which makes you develop a better understanding of what was going on in the tragic painter’s mind, but also lets you see past his mental health issues.

Van Gogh Highlights was launched by the Van Gogh Museum in Amsterdam late 2018 and was about Vincent’s letters as a whole, but it focussed on sentences that were highlighted by nine participating Dutch artists and by the visitors of the website. The project consisted of three components. First, the museum promoted the project by -literally- showing the chosen quotes on the streets: they projecting them onto the ground in different cities. They also created a website on which visitors could read Vincent’s letters for themselves. And simultaneously, they started to share a new twelve-minute podcast episode each week, in which the participating artists talked about their favourite quote from the letters. The website and podcast are still available. I chose to discuss this project because I admire the creativity that is shown in all three elements. The podcast won the Brand Story Award at the 2019 Dutch Podcast Awards, and the Van Gogh Museum won the 2019 GLAMi Award in the Marketing and Promotion Category from MuseWeb.

The first time I heard about Van Gogh Highlights I was a bit sceptical about it. I was scared it was a shallow publicity stunt, because most advertisement surrounding the project consisted only of one of the chosen quotes. But when I listened to the podcast I realised the project was not shallow at all. All the quotes were placed within the context of the letter they were taken from and related letters, from which you learn a lot about Vincent’s life and thoughts. And in addition to this, while explaining why the quotes they chose touched them personally, the artists really opened up about their personal lives and feelings. At the end of each episode, the listeners were actively invited to visit the accompanying website to read the letters for themselves.

Apart from making a great podcast, they also succeeded in designing an appealing interactive website. The website not only enables visitors to read Vincent’s letters. They can highlight and share their own favourite quotes, and add an description in which they can explain why these quotes appealed to them. By showing a lot of different quotes in a mosaic, the visitor gets an idea of the way Vincent wrote. And the quotes are links that direct you to the letters from which they are taken, so you can read them in their original context.

After learning more about the project, I’m not surprised that the museum received the awards for Van Gogh Highlights. It is so vastly different from the old, passive way museums often still communicate with their visitors. It really succeeded to reach people. This project is all about dialogue: between Vincent and his brother in their letters, the Dutch artists with Vincent and the listeners in the podcast and the visitors with each other on the website. Both the podcast and the website invite people to get actively engaged with the letters. Because Vincent is so sincere about his thoughts and emotions in his letters, they work as an instrument to help people open up about their own feelings. It is really special to see how his words are still able to make such a great impact.

According to the director of the Van Gogh Museum the goal of Van Gogh Highlights was to show the public that Van Gogh’s works and words are still relevant in modern times. This means that the original aim of the project was not necessarily to address a social issue. Nevertheless, I think the project did make a social impact. By listening to the podcast you get to know Vincent van Gogh a bit better. His letters give a rare insight in what went on in his head during these melancholic periods, as he called them himself. By reading his letters about his mental health problems, people who never experienced something like this might get an better understanding of the impact of these issues.

But even more important than that, is the fact that Vincent gives an insight in much more than just his melancholy. In his letters he addresses many social issues that are still relevant today, and you learn about his former dream to become a pastor and help people, his enormous compassion for the poor, and his endless love for nature, art and his brother. So above all, Van Gogh Highlights enables  you to get to know Vincent van Gogh not as that crazy painter that cut of his ear, but as a person.