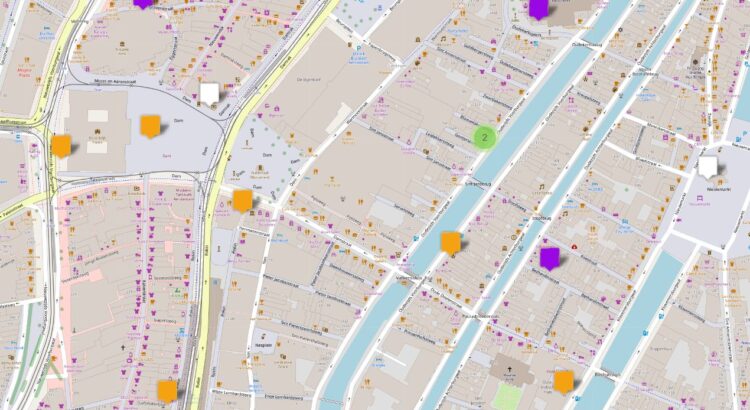 Amsterdam is a modern city, but many details refer to its long past. We see some old buildings and the canals, without directly thinking what they could tell us about their history. One history we especially do not associate with the Netherlands is slavery. All of this happened on the plantations in the Americas, or in the cargo hulls of ships on the oceans. Amsterdam had nothing to do with it, right? The research and education project Mapping Slavery proves this statement wrong.

Vrije Universiteit Amsterdam started the project in 2013. Dienke Hondius was the main initiator after a team of students investigated slavery in Amsterdam using so called compensation records to get addresses of slave owners. The compensation records were written at the time of the abolition of slavery in 1863, to reimburse people for their lost earnings. Starting from here the project grew larger, creating a detailed map of slavery in the city. Nancy Jouwer has since taken over the supervision of the research team.

Multiple cultural foundations such as the Mondriaanfonds and the Prins Bernhard Cultuurfonds have funded this research. Other donations come from the municipality of Amsterdam and, surprisingly, also some foundations with ties to America have joined in. The VU Amsterdam provides the main researchers and also chips in on the funding. The project has slowly spread to other parts of the Netherlands, Groningen University joined, and Utrecht University helped with specific parts. Even far outside of the Netherlands, at the Universitas Gadjah Mada in Indonesia information is being gathered. A complete list of participating organisations can be found here.

A lot of people and organisations are involved, but what do they actually want to achieve? The project is described as “including the history of slavery and the slave trade in local, national and regional history in Europe.” Other projects much alike these have been carried out in London. Mapping Slavery adds to this by redefining and reframing the concept of slave-ownership. Hondius herself tells in an interview for De Groene Amsterdammer (Dutch) how it perhaps is not new research or information for people educated in the subject, but it most definitely is a new way of presenting it to the people. She thinks it is important the tourists know how the expensive mansions have been paid for, and how local industries relied on products of slavery from the other side of the Atlantic.

They want to achieve this goal by answering four main questions. Which people in Amsterdam reaped the rewards of the slave trade? Where did the trading take place? What traces have been left in contemporary Amsterdam? And hoe prevalent were people of colour in the Netherlands during the past ages? Once they have this information, it is written in books, or made part of exhibitions in museums. They even have a series of video’s on YouTube and podcasts, to reach a wide audience. The easiest way to interact with the information is on the website. You get an overview of the city and when you zoom in on specific buildings you can read information about their connection with slavery. I found the texts to be both comprehensive and compact.

The project has become quite successful with the books they published, allowing people to walk routes through Amsterdam and other cities, that lead them past the traces of slavery. These traces can be clear depictions of people of colour in their role as servants or plantation workers, but also unsuspecting gravestones of the merchants that traded them.

Media has talked about this project in various articles. Never with the project as main focus, but often mentioned as valuable research on the topic of slavery. Sander Phillipe says in his article (Dutch) in One World: “the beautiful project Mapping Slavery” is one of many that adds to publications on the subject. The first edition of Slavery Heritage Guide Amsterdam has sold over 5.000 copies.

Books published by the project have been reviewed by other researchers. So has the Slavery Heritage Guide Amsterdam been praised by Harry A. Poeze for including an oft unseen variety in the discourse on slavery. Because it not only looks at Atlantic slave trade, but also at East India and Amsterdam itself.

In my opinion the project is very successful in educating the public on a difficult subject as slavery. It engages people because it makes them realise slavery wasn’t unseen, far away in different eras. The aftermaths of slavery are still very much present, and closer than one might expect. The riches it left here should be acknowledged as such.