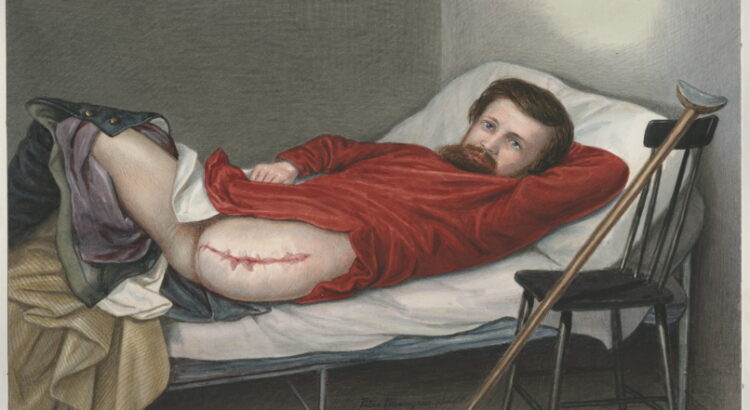 Just like sex, war sells. In the Netherlands there are approximately fifteen major museums about the Second World War alone, and even more information centres, places of remembrance and other ‘lieux de mémoire’ remembering the second world war.

Disability, on the other hand, is a rare topic in museums. A disabled person is seldom seen portrayed on a painting, in a sculpture or otherwise.

But what about soldiers who became disabled at the battlefield? Are they supposed to be seen as heroes like their comrades? Or as victims, who are in need and dependent on others?

The exhibition Life and Limb. The Toll of the American Civil War made by the U.S. National Library of Medicine focused on the experiences of injured soldiers of the American Civil War (1861-1865), during the conflict and afterwards. The creation of this exhibition wasn’t self-evident and obvious: in the first instance the plan for an exposition about disability was rejected, because the museum thought disability sounded depressing. The idea then spawned to choose a different, more attractive main topic for the exhibition, and through this allow the topic of disability to sneak in. The Civil War acted as Trojan Horse for the disabled soldiers.

The Civil War acted as Trojan Horse for the disabled soldiers.

Life and Limb consisted of six free-standing panels, and was a traveling exhibition. Anyone with a minimum 500 square feet of free floor space could request the exhibition to be sent over. The two plastic wheeled graphics tubes were to be unpacked by two people, who would then set up the panels.

The museum staff furthermore increased the impact of the exhibition significantly by adding many detailed educational resources, such as lesson plans and modules for undergraduate and graduate courses.

The focus of the exhibition is broader than just the military life. There are pictures of men in uniform and battlefield scenes, but they are alternated with pictures showing aspects of the daily life with a disability, for instance of artificial limbs. Subjects are among other things: new technologies both on the military and the medical front, surgeons at the battlefield, revalidation practices, the financial difficulties of living with a disability and more.

The disabled soldiers in the exhibition are portrayed as “symbols of the fractured nation”. In this interesting analogy, both the men and the country are wounded. The soldiers are thus partly identified with the nation they fought for. They are, like America, not piteous victims, but instead: magnificent, of the greatest importance, scratched but perpetual.

In this interesting analogy, both the men and the country are wounded.

It is important to show disabled soldiers, or people, in this more mixed, diverse and nuanced way. Disabled persons are way too much often portrayed in a too simplistic way, if they are represented at all. By avoiding the trap of focusing solely on their military capabilities and achievements, the museum makes a great contribution towards normalizing the presence of representations of disabled people in museums.

The two plastic wheeled graphics tubes containing the six panels were delivered to the Ruth Lilly Medical Library of the Indiana University in the winter of 2018. The university website still contains an article in which the exhibition is announced. The professor of English Jane E. Schultz was going to give a talk in the library in which the exhibition was hosted, and she previewed it in the article.

As a result of her profession, she was particularly interested in the narratives of the contemporary surgeons: she focused on “the ways surgeons wrote about their experiences”. Nevertheless, the goal of the exhibition, namely to proverbially unbury from the footnotes the stories of disabled soldiers during and after the Civil War, was reached, for she stated: “People might have occasionally seen what amputation saws looked like, but the pictures of the amputees, the crutches, the human factor of this, I think, effectively conveys the traumatic impact of the costs of war.”

At first the museum didn’t want an exhibition about disability, fearing it would sound depressing. Nevertheless the exhibition was created, disguised as display about the Civil War, and it was a success. Because of the well-chosen form, the six panels have been able to travel the United States for years. On different locations the local hosts have juxtaposed the National Library of Medicine’s panels with objects from their own collections, invited local disabled veterans to talk about their experiences or made other interesting collaborations. In this way, the in first instance unwanted exposition turned out to become a remarkable success.

A blogpost by Tijmen