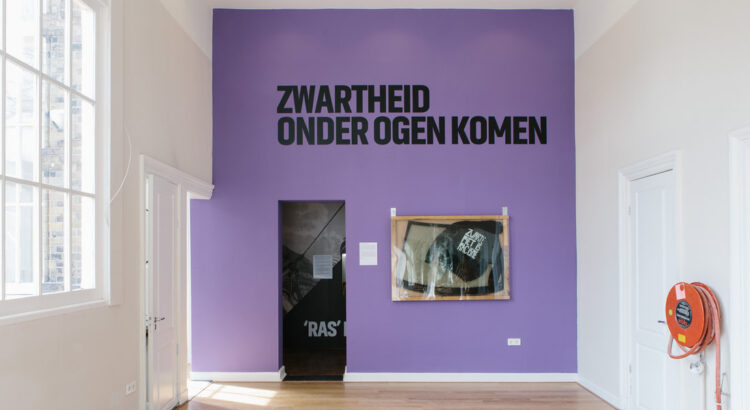 “There is disbelieve, panic. We smell smoke, we see glass lying everywhere. People hold on to each other, text, call, and stay close to each other.”

The aftermath of what Miriam described was demolished cars and a building with broken windows. Why? On 8 November 2019, a national conference of activist organization Kick Out Zwarte Piet (KOZP) was held in The Hague. With this conference, KOZP wanted to create more awareness around the fight against Black Pete in the city. Ten minutes after the meeting started, radicalized proponents of Zwarte Piet (translated: Black Pete) surrounded the building and started to throw fireworks and used violence and weapons to disrupt the meeting. One of the cars that was destroyed during the attack belonged to Mitchell Esajas.

Right now the front window of Mitchell’s car is on display at the temporary exhibition Facing Blackness in The Black Archives. Before it came to the institute, Mitchell had to save the window. A few days after the conference he got a call from the garage, saying that his car was declared Total Loss. Mitchell told me, after the event Re:Use Clinic #2 on 29 September 2022, that the car was the old Opel Corsa of his father and that he had asked the garage if he could keep the smashed front window. The glass was cut out and the window was put in an improvised wooden frame. Being the co-founder of The Black Archives, Mitchell made decision to make the smashed car window part of the collection of the institute. In an interview with AT5, he declared: “I thought: maybe one day I can use it as an educational material.” For a few years the window was stored in the depot of the archive, but the curating team of Facing Blackness decided to make it the first item of the exhibition.

Before putting the window on the wall, a black hoodie with the sentence ‘Zwarte Piet is Racisme’ (translated: Black Pete is Racism) was added to the wooden frame, topped with Plexiglas. The reason why these two items are placed together, has multiple layers. On its own the hoodie is already connected to the window because it is one of the slogans used by Kick Out Zwarte Piet. What makes this hoodie even more special, is the fact that it belongs to Jerry King Luther Afriyie. He is the leader of the activist organization KOZP and wore this hoodie when he was violently arrested by the police in 2011. On the exhibition text, the curators explain that the violence that was used against Mitchell and other KOZP-members, is exemplary in the long history of colonial and racial violence against Black people in the Netherlands. The car window embodies this violence, but the hoodie takes on a different meaning and stands for hope and resistance.

Since 2011 Kick Out Zwarte Piet has grown into a broad social movement in the Netherlands. It not only caused people to question the tradition of Zwarte Piet, but also the larger subject of institutional and anti-Black racism after many years of silence. As the exhibition sign in TBA says: ‘because of the new wave of anti-racism, the taboo around racism in the Netherlands and the self-image of ‘white innocence’ is smashed to pieces, just like Mitchell’s window.’ This way the metaphor of the car window goes even deeper.

Racism and the Netherlands

‘A belief that race is a fundamental determinant of human traits and capacities and that racial differences produce an inherent superiority of a particular race’ and ‘the systemic oppression of a racial group to the social, economic, and political advantage of another’.

In her book Het Antiracismehandboek (2021), Chanel Matil Lodik explains that racism goes back to the 16th and 17th century, when slavery was an important means of income for European countries. By depicting Black people as inhuman, it was easy to justify slavery. Throughout the ages that followed, the portrayal of Black people being different and inferior became more and more common.

This centuries-old way of thinking is still present today. Black, Indigenous and People of Color experience forms of institutional racism to this day. Having to deal with people looking at you in a certain way, communicating with you differently and not being represented in history books are just a few of the examples. During the Re:Use Clinic #2 event Mitchell also spoke about the KOZP movement and what having to fight against a racist figure does with your wellbeing. He told the audience about dealing with a racist subject daily, next to dealing with verbal and physical violence, police violence, mass arrests and negative media reports. All of this together can be emotionally exhausting, harmful, and traumatic. Studies confirm that these kinds of experiences with racism can lead to poorer health, on both a psychical and mental level.

Hope for the future

With social movements like KOZP and Black Lives Matter, exhibitions like Facing Blackness and more research on colonial and imperial history, more attention is given to the origins and outcomes of racism in the Netherlands. With these developments, institutional racism is becoming more widely recognized. There is still a long way to go, but like the smashed car window and hoodie represent: the time of denial is over, and resistance is here to kick its butt.

I would also like to thank Mitchell Esajas for his openness about this subject and his reflection during the Re:Use Clinic event.