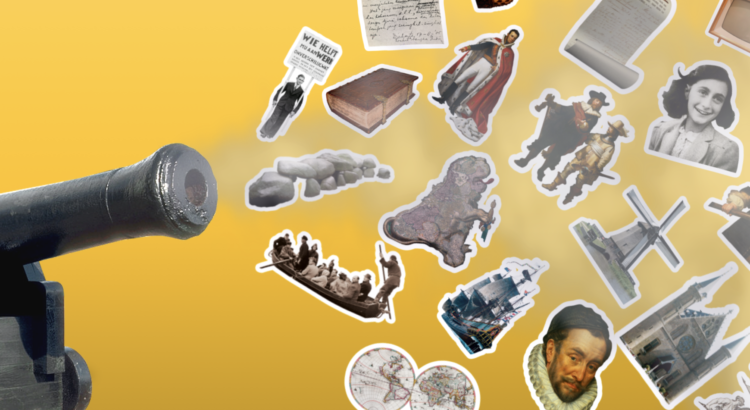 Bringing together the entire history of the Netherlands in one exhibition: that sounds almost impossible. Nevertheless, a brave attempt has been made. Exactly a year ago, the permanent exhibition De Canon van Nederland (the Dutch Canon) opened in the Nederlands Openluchtmuseum (Dutch Open Air Museum) in Arnhem. About fifty windows showing the historical and cultural development of the Netherlands, from prehistory to present. An impressive exhibition, even though as a visitor, you come under fire from ‘digital artillery.’

What do we Dutch really need to know about our own past? That was the starting point of the Dutch Canon, which was presented in 2006. Commissioned by the Ministry of Education, historians put together fifty windows, each of which offers a view to important persons, objects and events, which together tell the ‘story of the Netherlands’. The canon is primarily made for ‘the future of the Netherlands’, or to be more precise: students. Since 2010, the windows have also been the core objectives in the teaching of history. But eventually, every Dutch citizen should know about this Canon – historians like Mieke Vos even see it as having a higher goal of ‘social cohesion’.

The history of the Dutch Canon itself is, to put it mildly, not the most beautiful. Even before the launch, there was a lot of criticism: can ‘just’ fifty windows give a complete and honest picture of history? The Canon is still the subject of discussion: according to critics, for example women’s rights and slavery should be given a greater role. And then there was the controversial plan for a National Historical Museum. The Canon, which already existed as a guideline for education and as a digital platform called entoen.nu, would be physically expressed in this way. Due to protests and political struggles, the museum never came into existence.

Finally, in September 2017, a slimmed down version of the Dutch Canon was integrated in the already existing Dutch Open Air Museum in Arnhem.‘Digital’ and ‘interactive’ were the magic words that appeared in every description and review. And rightly so: the exhibition is really magical.

Entering the exhibition, you will find yourself in a square surrounded by film sets – ten in total, based on the ‘tien tijdvakken’ (ten periods) of history teaching. The sets are all technical masterpieces and feature wall-filling tv-screens, touchscreens and multiple games. Ironically enough, the prehistoric set features one of the most modern techniques: a ‘running plate’ on the ground, in which you can hunt a (digital) deer displayed on the screen by running towards it. At the Roman set, there’s a game where you can work as a trader using a touchscreen. And in each set there is an interactive mirror, in which you can see how you would have lived in that period of time.

Two more halls are situated behind this ‘tech playground of history’. The first one is an impressive cinema, in which three panoramic films show how the country that is now called ‘The Netherlands’ has changed over the centuries: geographically, geologically and demographically. Behind it you walk onto a large, interactive wall of eighteen metres wide, with the fifty windows of the Dutch Canon, with a little more additional background information for those who want to know more.

The history of the Netherlands may be the subject, but the exhibition itself represents the ‘museum of the future’: much to do, much to see, much interaction. The museum seems to focus on youth with the many, easy games, but in the end the Dutch Canon is there for everyone. I even witnessed a granddad running on the plate, hunting a deer. It is a museum for everyone, about everything that’s important in Dutch history.

A 360 degree tour of the Dutch Canon in the Open Air Museum in Arnhem. Credits: NOS

And that’s where the magic stops. As a visitor you are really overwhelmed – not only by the amount of subjects, but also by the amount of techniques. The result is that the exhibition is more of a showcase of history than a real museum. However, original attributes can be found between all sets. The 7,500 year old skeleton called Trijntje for example, or the original leather gloves of Dutch statesman Thorbecke. These physical proofs of history are sadly overshadowed by all the digital eyecatchers. The explanation of these different objects is also brief. If you want to know more, you have to scan the key cord you received upon entering, and you will receive more information in your mailbox.

The exhibition of the Dutch Canon is unique in many ways, first and foremost because of its exceptional multimedia approach. The fact that the Canon’s website entoen.nu was there before the physical exhibition is also remarkable. ‘You can deep-dive into history as you like’, staff member Martine Gosselink said about the exhibition in the Volkskrant. But for that, the visitor is strongly dependent on the website. Or rather: websites. In addition to entoen.nu, the Canon has its own website, where you can find even more information. At the exhibition, the separation between the online and offline worlds is minimal. On the one hand, it complements each other perfectly: there is plenty to do, both in the museum and online. On the other hand, the museum itself is like windows shopping throughout history: pleasant, but shallow. If you want to know more about window-subjects like ‘Rembrandt’ and ‘slavery’, there’s a bunch of museums that do a better job with more detailed information.

The exact intentions of the creators of the Dutch Cannon exhibition stays vague. If it is a bird’s-eye view of the Dutch history, in which fun and amazement are the main objectives, then I would say that it is extremely successful. If it wants to be a place to learn a lot about the Dutch history, it fails in its attempt, due to the overload of ‘digital artillery’. Historian Christiaan Weijts described the exhibition in NRC Handelsblad as an example of ‘lemonade syrup’, in which you have to add the water yourself. I’ll drink to that.

A trailer for the Dutch Canon in the Dutch Open Air Museum. Credits: Omroep Gelderland