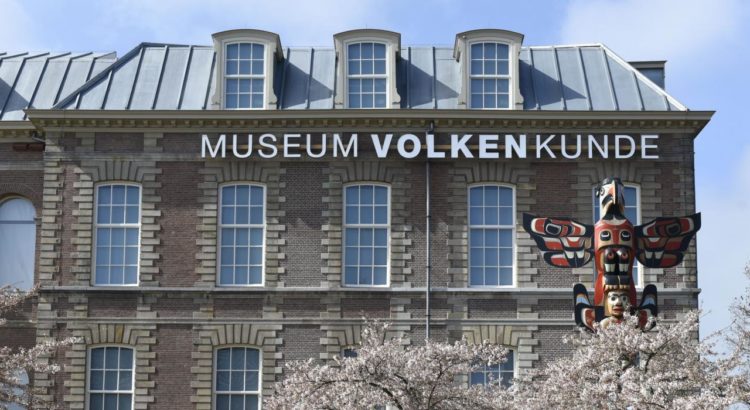 Outside the museum that once started with one of the earliest public collections of the ethnographic type, the Volkenkunde Museum in Leiden, hangs a huge poster with different photographs on it of all kinds of people from all over the world. Pronto the attention of the soon-to-be-visitor is drawn to the different faces on the photographs. Although one might argue if a printed poster can be called a digital public history project, the subject of what is exhibited inside is immediately clear.

Once I bought my ticket I walked into a major hall whereto all kinds of rooms were attached, all with different themes. The room that I was most drawn to (because of personal interest) was the room about North America. I was struck with awe when I saw the broad room with al the glass showcases, with all the different artifacts inside. From an impressive two meters high warbonnet, to little and big axes, to Native American baby-carry-tools, there was a great number of artifacts for me to see at first glimpse. But these artifacts were the artifacts of just one room in the museum. The Volkenkunde museum already housed 240.000 objects in total in 2014 according to an article in the Dutch paper Volkskrant. That great number has not shrunk since, quite the contrary actually. The museum has almost 450.000 objects right now. Even though the artifacts are already fascinating just looking at them with no further information, most average museum visitors would presumably like some more information.

This is the moment that one could ask: how are the staff members of the museum going to take care of the right provision of information to each particular artifact? Either the museum would be overflowing with explanatory signs, or the museum staff would have to carefully select the most important information (possibly causing a lack of information or subjectivity in information selecting).

The solution in the Volkenkunde museum seems to be the setup of digital displays, something that is called ‘window on collections’  in the article of Gwyneira Isaac. On the display one can click on one of the objects that is pictured on the screen. When clicked on, a page appears with elaborate information about the object, such as the name, the year that it is from, the materials that it is made of, how it was used, etcetera.

Not only can this digitalised information provider contain a great deal of information, the display with the images also makes the learning and understanding process more interactive. The more because some screens also showed short clips (± 5 minutes) about a subject/object that was shown in front of it. During my visit, children but also adults were watching the fragments and the kids could afterwards answer questions about the artifacts and earn stamps. Again: the digital attributes in the museum caused more interactivity and maybe even fastened the learning and understanding process. The duality of on the one side the digitalised information provision and on the other hand the authentic, traditional artifact is one to cherish. The ‘conservative’ museum visitor can still enjoy the beauty of the traditional objects, while the ‘progressive’ museum visitor can experience more accessibility and more modern ways to present the past.

The Volkenkunde museum had 62.1 (in fte) employees in 2014 according to an article in the Volkskrant. After the fusion of the Volkenmuseum, the Afrika museum and the Tropenmuseum into the Nationaal Museum van Wereldculturen, the number of employees has grown, but what one especially shouldn’t forget is that the digitalization of a museum can create new jobs. For example: a so called DigiTeam can be called into life to take care of the digital features of the museum. The Smithsonian institution describes digitalization as:

“a set of processes that converts physical resources to a digital form or creates materials in a digital format, which can then be shared through digital devices, equipment and networks”

Reading the previous description of digitalization, it is noticeable that the digitalization asks for more employees. In case of the Volkenkunde museum in Leiden, there must be a group of people that take care of the displays inside of the museum, but the museum also needs people that take care of the social media of the museum and of the online collection. Because I think the digital (public) attributes are no substitutes, but rather complementary factors, the museums will presumably need more employees. With these specialised employees, the digital history possibilities of the museum will get more adjusted to the diverse group of people that will visit the museum, resulting in even more accessibility and interaction.

In short, the Volkenkunde museum (but also other (partially) digitalised public history projects) fosters a rich dialogue between the traditional values of a museum and the more participatory values with digital attributes. In a time where technology and the digital world are becoming more and more important, it is crucial for museums to grow with. Once again I would like to emphasize that the digital attributes in the Volkenkunde museum provide more interactivity and the museum becomes a participatory museum. Not only is the more digitalized sphere in the museum good for the visitors, but also for the employees of the museum. The digital possibilities are not at the expense of the traditional image of the artifacts. Moreover the digital additions to the museum will only help the museum to get more accessible and informative. So the digital public history project of the Volkenkunde museum should keep digitalizing, because a (digital) chain is only as strong as its weakest (web)link.