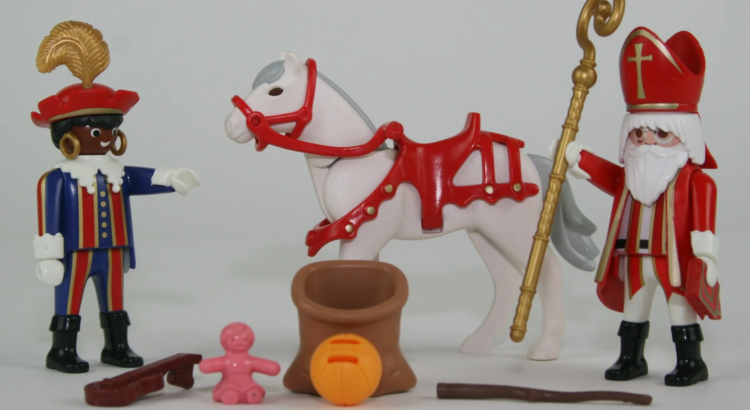 Our generation has the last active memory of the normalization of Zwarte Piet. I remember growing up and being completely oblivious to the historically racist character that Zwarte Piet portrayed. Zwarte Piet was an essential part of Sinterklaas and that was all I could see as a child. Nowadays I get extremely uncomfortable when I see anything Zwarte Piet-related. How have historical racist portrayals of Black people become so extremely embedded throughout the Dutch culture, into everyday practices and products? That is the question the Black Archives asked when collecting this item for their current exhibition Facing Blackness. This Playmobil toy set of Zwarte Piet and Sinterklaas portrays the normalization of racist characters in children’s products but also shows the impact of the cultural resistance towards these representations.

The toy set displayed in the Black Archives collection shows a setting Dutch children are extremely familiar with: Sinterklaas on his horse Amerigo, with next to him Zwarte Piet, and a bag full of presents and toys. The story of the ‘good holy man’ Sinterklaas and his ‘knecht’ (servant) Zwarte Piet has been told to children every year through songs, films, and tv shows. Some of these songs date from the 1850s and have been sung every year since. In November and December, Sinterklaas and Zwarte Piet are visible everywhere, from posters on the streets to chocolate and candy in the supermarket. Therefore, it is not surprising that one of the most popular children’s toy brands Playmobil released a Sinterklaas and Zwarte Piet version of their toys.

The object consists of a closed box from 15x15x5cm, that shows an image of the final product on the front and the separate components on the back. The toys have bright colors and show Sinterklaas and Zwarte Piet in their familiar clothing and accessories. Zwarte Piet wears big golden earrings, creolen, which are often seen as a symbol for former African slaves in the Dutch colonies. Surprisingly, the Zwarte Piet toy does not wear red lipstick, which is often used to largen the lips of the character. However, other Playmobil versions of Zwarte Piet do wear red lipstick.

Most noteworthy is that the Zwarte Piet toy carries a wooden stick, which represents the ‘roe’: a bundle of twigs that was used to scare children and punish them when they have been naughty. Weirdly enough, the roe has been abolished mid 20th century as pedagogues believed it was inappropriate to portray Zwarte Piet as a violent, punishing character. The toys represented an already outdated version of Zwarte Piet, however, this was still perceived acceptable for a children’s toy.

The Black Archives state that the product dates from ca. 2009. However, the Sinterklaas collection of Playmobil was released from 2010-2014. The found manual guide for the set also dates from 2010, and all websites that still sell the collection, as a ”collector’s item”, state that it was released in 2011. The object was produced in Germany as Playmobil is a German brand, they do however produce specific products for the Netherlands, as Zwarte Piet does not exist in Germany.

In 2014, Playmobil, amongst other children’s toy brands, stated that they won’t produce Zwarte Piet-related toys anymore. The brand explained that the collection was always meant to be temporary and that the toys simply ‘sold-out’. Playmobil did not release a statement on the Zwarte Piet debate, but during the time of their collection, a nationwide shift became visible.

The Zwarte Piet debate in the Netherlands has been ongoing for almost a millennium, as the first critique of the blackface caricature dates from 1927. The first protest groups were formed in the 90s, such as Zwarte Piet = Zwart Verdriet (Black Pete = Black Sorrow). However, the debate intensified since the appearance of the campaign Zwarte Piet is Racisme by Kick Out Zwarte Piet (KOZP) in 2011. This campaign has created a nationwide movement against Zwarte Piet and resulted in multiple socio-cultural changes: Zwarte Piet is abolished from Dutch television, most ‘Sinterklaasintochten‘ in major cities altered the appearance of their Pieten, images of Zwarte Piet are banned from Facebook and Instagram, and also from most supermarkets and stores. Additionally, children’s toy companies have stopped the production of Zwarte Piet-related products, even if they do not claim these decisions as influenced by the movement.

The Black Archives is a historical archive based in Amsterdam. Their collection focuses mainly on material from Black communities in the Netherlands. Whilst focusing on the painful history of colonialization and slavery, the archive also wants to highlight the emancipation and achievements of these communities. Their current exhibition Facing Blackness was inspired by the Zwarte Piet is Racisme campaign and wants to show the history of the portrayal of Black people, and their resistance towards these (often stereotypical) portrayals. This exhibition therefore not only shows the history that happened but also the power and agency that Black people took to change the representation of this history.

The curator team wanted to collect material that represented how the colonial portrayal of Black people became rooted in the Dutch ‘cultural archive’, meaning that these portrayals were visible in cultural products and traditions. These visual portrayals were found in various objects, for example, comic books, posters, utensils, but also children’s toys such as the Playmobil set. They spend a year collecting ‘oral history’ and objects from public and private collections. Even though the exhibition opened in April, the collection of material is still active. The Black Archives encourage the public to donate objects and tell their stories, so they can collect further information on the subject that hopefully will stay relevant for a long time. Through exhibiting products such as Sinterklaas children’s toys, the Black Archives portrays that elements that were once so normal in Dutch culture, are now denormalized through active resistance of protest groups such as KOZP.

You can still visit the exhibition Facing Blackness till the 23rd of December on Thursdays, Fridays, and Saturdays. More info here. You can also watch a panel discussion about ’10 year Zwarte Piet is Racisme’ here.