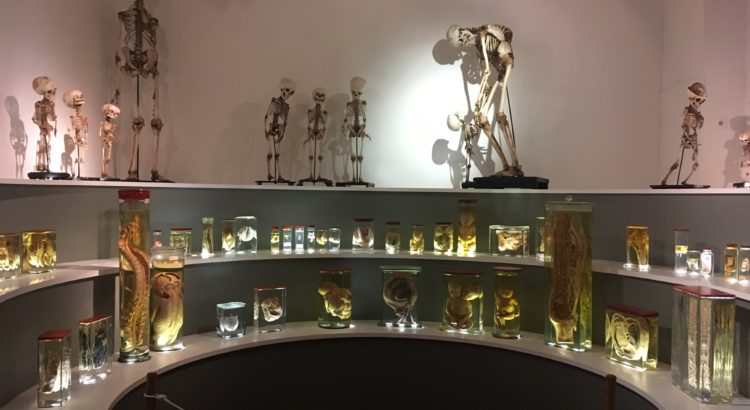 The arrangement of the specimens is nicely done. The arches of the anatomical theatre display give visitors a good overview of everything there is to see, the lighting from below ensures the entire collection is properly visible and there is an index of all the specimens for clarification. Nevertheless, the lack of both historical and medical context is noticeable. Besides the historical overview on the website, no information is given in the room itself about the origins of the collection, or who Petrus Camper and Pieter de Riemer were. When asked about the collection’s history, the museum staff added that the specimens were donated to the university after both their deaths. Showcasing this history somewhere in the Enschedé Room would have legitimized the collection as historical medical artifacts rather than just portray them as a sort of ‘cabinet of curiosities’. For example, one of the more interesting specimens is a longitudinal section of the torso of a 27-year old man. This is all the information that is available in the museum, yet in an interview with the local news channel, the collection’s curator goes into more detail: the body was donated in 1920, it was then frozen in a mixture of salt and ice to be cut into seven slices. Stories like this would make the collection more than three rows of human remains.

Other expositions in the museum do state the origin of the artifacts on display. In the room dedicated to the Dutch Canon, specifically Aletta Jacobs, visitors can observe medical instruments from her lifetime and there are even two embryos in formalin. The medical artifacts all have a small description of their function. More importantly, the human specimens have a description of their origin, which is Pieter de Riemer’s collection. Why do this for one room and not the other? The lack of context in the Enschedé Room is only highlighted by this decision.

In the case of the University Museum, historical and medical context could combat the possible concerns about the collection’s origins. Over the last few years, human remains in museums have become controversial. Visitors sometimes have strong reactions to seeing human remains, especially babies, in jars. Besides this, many human specimens can trace their origins back to former colonies and are on display in museums in the former colonizing nations. This has led to a debate centered on ethics and consent, even resulting in a repatriation of human remains in some cases. When the University Museum in Groningen added the anatomical collection to its permanent exposition in 2011, this debate about ethics had been going on for several years with several museums making the conscious effort to move away from human specimens. Yet, the University Museum made the decision to showcase their collection, going against this trend. The curator explains this by saying there was a huge demand to see such specimens, but having human remains on display becomes precarious when looking at the historical context of colonization. One specimen in the collection calls to mind this colonial past: penis van een Ethiopiër (penis of an Ethiopian). Even though Ethiopia was never a Dutch colony, a description like that does raise questions about the origins of the specimen. Providing more context in the Enschedé Room could clear this up or shed light on the historical context of the specimen.

There is one skeleton that comes with an origin story. The skelet Martinikerkhof (Martini cemetery skeleton) is described as being excavated from a cemetery in Groningen in 1987, followed by a complete description of the scientific process to determine what age and sex the skeleton was. Though there is the issue of consent, the remains were not willingly donated but excavated hundreds or years after death, the museum shows visitors the value of this skeleton as a specimen by giving a description of its origin, its historical period and scientific value. The deeper look into the scientific process behind those remains is a valuable addition but it only emphasizes the lack of context for the other specimens.

By having a more open approach towards historical context and origins of the collection, the Enschedé room would become a more immersive space that provides deeper insight into the medical history of these human specimens. As one of the staff members said of the decision by some museums to remove provocative specimens; “even if you don’t see it, that doesn’t mean it doesn’t exist.” Hence the University Museum in Groningen decided to showcase these specimens. This rhetoric goes for the more controversial history of some of the human remains as well. The lack of provided context leaves questions about the origins of the collection’s specimens and a history that is very present yet uncomfortable to talk about.