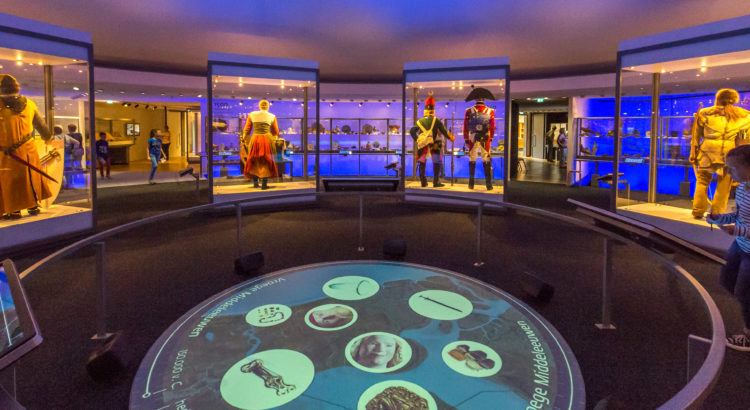 In 1995, during archaeological research a skeleton was found near the Dutch city of Castricum. The skeleton was more than 1600 years old and turned out to be a woman from the 4th century. She was probably between 24 and 30 years old and she originally came from East Germany. After further research the University Medical Center Utrecht made scans of the female skull. Archaeologist and anthropologist Maja d’Hollosy made a reconstruction of the woman’s face and gave her a name: Hilde of Castricum.

Last Saturday I paid a visit to Hilde’s house together with my family. Hilde’s house is an archaeology center in Castricum and has been open since 2015. The center is the archaeological repository of the Dutch province North Holland. Hilde’s House stores about 12.000 boxes of archaeological material, among which the skeleton and reconstruction of Hilde of Castricum. The province wanted the center to have a public function as well, so Hilde’s House is partly an archive and partly a museum. It houses a new exhibition on the archaeology of North Holland. The center was nominated for the European Museum of the Year Award in 2016, which is an international museum award. This award is previously won by the Rijksmuseum in Amsterdam in 2015.

Hilde’s House has a permanent exhibition about archaeology and human history in North Holland in the exhibition space of the museum. The exhibition space is a round room;  display cases with archaeological objects are placed along the walls. The exhibition is set up chronological, from the prehistory till the Second World war. Spread across the room, you can see 14 lifelike human figures from various periods. Most of those figures are reconstructions of skulls excavated from the North Hollands’s soil. We have seen Cees the Stone Age man (2500 B.C.E.), Hilde of Castricum (400 C.E.), William and Hillegonda van Brederode (1300 C.E.) and Brecht, the woman from Alkmaar (1573 C.E.). The skulls of the figures are lying in glass display cases in front of the reconstructions. The figures correspond with the chronological order of the objects along the walls. In the center of the room there is a projection on the ground with an interactive map. Visitors can use digital display screens to change the map and add information to it. They can see how the landscape of North Holland changed over time. A few times an hour the lights in the room becomes blue and then the introduction film starts in the middle of the room.

Hilde’s House is developed by the province North Holland. The province was looking for a new archaeological repository with a public function. The permanent exhibition is developed and furnished by architectural firm MMEK, in collaboration with the archaeological service, heritage consultants and Fons Verheijen, the architect of the building. MMEK is known for their ‘experience-approach’. They call themselves experience architects; they create experiences which combine digital tools and human interaction. The exhibition in Hilde’s House has also become an experience. There were a lot of lights and sounds in the room and they changed over time. That symbolizes the natural change in time. The architects wanted  to focus on the human history of North Holland. Therefore they put the human figures in the centre of the room. The archaeological objects were less important, according to the architects. That is why there were so few information signs in the exhibition as well. The information can only be found on the digital display screens. The architects wanted the visitors to wonder about the (pre)historical human and to come up with their own questions. Then, the visitor would think as a real archaeologist.

The ‘experience-approach’ was clearly noticeable. The room was well designed and the human figures were really lifelike. Yet I did miss the information signs in and around the display cases. Apart from the fact that the digital display screens did not always match the objects in front of you, the information on the display screens was not sufficient either. Historian and journalist Jona Lendering noticed the same problem. On his blog he is critical about the provision of information in Hilde’s House. He says: ‘For example, anyone who wants to know which Roman emperor is depicted on this or that coin, he does not find out’.[1] And it is not only the information about the archaeological objects that is missing, it is mainly the context of the exhibition. Little was told about the historical context of the objects: great historical events, the political or cultural situation of the area. The visitors had to contextualise the objects themselves and interpret their value on the basis of the information on the digital display screens. In my opinion, visitors can be helped more on the way during their visit. When the museum offers little context, the visitors will not ask the right questions. Then, they cannot think like a real archaeologist.