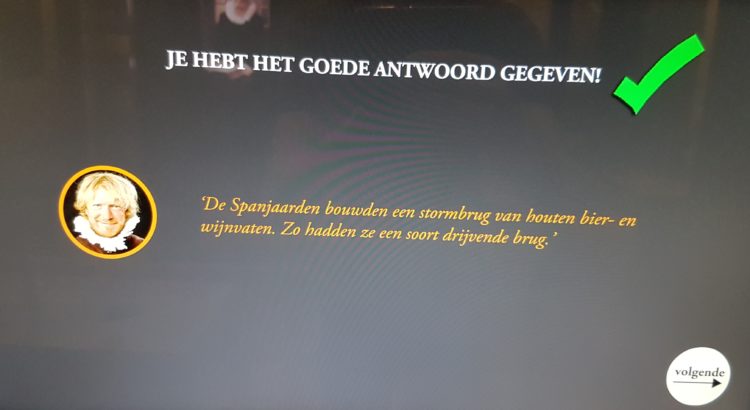 On September 16th, I visited the Stedelijk Museum Alkmaar (SMA). According to it’s website, the museum claims to be the memory of Alkmaar where one can experience and discover the history and art of this city and its surroundings. The museum has several permanent and temporary exhibitions. I paid a visit to Victorie! Het Beleg van Alkmaar in 1573 (Victory! The Siege of Alkmaar in 1573), a permanent presentation. On a subpage of the SMA website, dedicated tot this presentation, we are reminded of the fact that Alkmaar was the first Dutch town that resisted a Spanish siege during the Eighty Years’ War, no small exploit, yet unknown to many. Reason enough for this exhibition where the public may experience the Siege day by day. This subpage mainly informs the public, so you can prepare your actual visit to the SMA. A link, however, is offered to discover the Siege in the Online Collection. You won’t see a digital exhibition of the Siege however. You have to find images in the Online Collection yourself.

Let’s take a closer look at the ‘real’ exhibition in the SMA building where the story of the Siege is told using a combination of different media. Victorie! started on October 8th of 2012 after a renovation of the SMA. Concept, composition and AV-scenarios were arranged by Duinzand museale projecten, while Roel Schneemann was responsible for the design of the project.

Victorie! is located in the basement of SMA and starts in a hallway were there are three tv screens on which an introduction of the exhibition is displayed (with English subtitles). There is a button which starts the film, although it may also be activated by approaching the screens or start automatically after some time. This also applies for the other screens located at various places in this exhibition, though I didn’t see any buttons there. On the wall on which the three screens are attached there’s also information (in Dutch as well as in English) telling us that this exhibition is based upon a diary of Nanning van Foreest. He was pensionary of the town and tells the story of what happened during the Siege on several screens in the exhibition. There’s information on the floor too that refers to parts of this and other exhibitions of the SMA. You are drawn to these first screens and it’s noise, thereby easily overlooking a big painting of the Siege at the beginning. This is symbolic of the fact that it is in this exhibit not really about art or artefacts. It’s the story about the Siege that counts!

That story is told by a bunch of ‘objects’ of all sorts. Of course there are pieces of art and artefacts, but these are not always originals. For example, I saw a series of original paintings of the siege, as well as several replicas of archival pieces. At several points in the exhibition there are screens on which ‘Nanning’ tells about a particular phase of the siege, guided by a quote on the wall from his diary. There is a huge wall with real ‘schutterstukken’ on which the civic guard of Alkmaar is painted.

More in the middle of the exhibition there is a room where there are four tables with telephone receivers. You can listen here about the Siege from the perspectives of four fictive persons: Jacob the Beggar, Catholic farmer Dirk, the Protestant citizen Cornelia and Juan, a Spanish soldier. The surrounding walls show real pieces as well as replicas and pictures of our four ‘eye witnesses’. This too, underlines that it’s not about art and artefacts, this exhibition is about the story of the common man. At several places in the exhibition there are screens with telephone receivers where Jacob and the three others again tell about their experiences. In this exhibition all kinds of objects merge together, the distinction between art, artefacts, replicas, digital representations and even real skeletons (!) has become less important in favor of experiences and stories.

There are more ways you can experience the events of 1573: by pulling a cord you ring an (digital) alarm-bell and you can also find out for yourself how heavy a real cannon ball is. There is a screen on which you can test your knowledge of the Siege. One fantastic example of how different objects merge together into a combined experience is the multimedia showbox located at a border of the exhibition: a glass window and behind it a space with a painting in it. On the window some of the four characters are projected as well as ‘blood’ and ‘rain’, while parts of the painting will lighten up and dramatic music is played. The painting is just one of the ingredients of a multimedia receipt.

The Siege is thus told in a multi-inclusive way, by using different kinds of media and by telling it from different perspectives. The exhibition is interesting for all kinds of people, because experience and substance are in balance. The exhibition is based on a real historical source and a digital version of its author tells his story on various locations. Younger people may be more attracted to the digital media whereas historically more interested persons will also read the ‘analogue’ information on the walls.

Duinzand museale projecten claims they start from substance and translate it to exhibitions centered on story and experience. I think they pretty well succeeded. And that’s what a museum visitor wants, to experience what he sees, a journalist of het Noordhollands Dagblad stated when the renovated SMA and this new exhibition opened in 2012. Digital media have its limits though. When I watched “Nanning” in one room, his voice was drowned by the sound of another movie nearby!