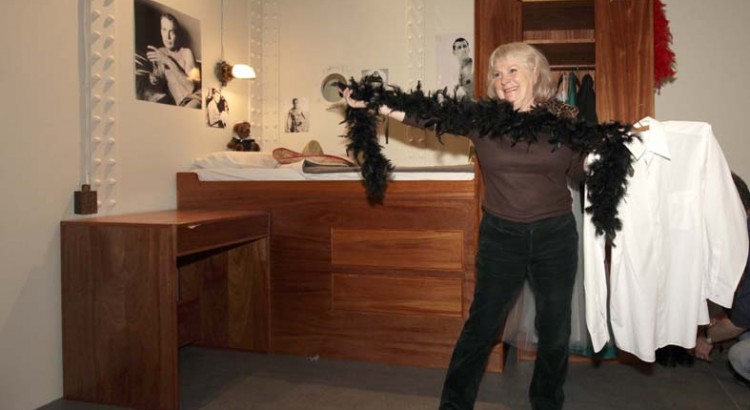 ‘Given the right opportunity, we can generously embrace the whole diversity of human experience.’ With this positive statement in the back of her mind, dr. Jo Stanley co-curated the Hello Sailor! exhibit created by National Museums Liverpool in 2007. This lively exhibition, that turned out to be a great succes, was based on Hello Sailor! The Hidden History of Gay Life at Sea, a book published by Jo Stanley and Paul Baker in 2003. It gives us a closer look into the lives of British gay sailors from the 1950s to the 1980s, which was a time where homosexuality was illegal and the feeling of opportunity was scarce. In the midst of the ocean waves though, there was a general sense of freedom that directly opposed the hardships that homosexuals often faced on land. In my opinion it is this duality that Stanley chose to portray, that has made the exhibit such a succes.

In this article about the exhibition written by Anthony Tibbles, director of the Merseyside Maritime Museum in Liverpool, it is pointed out that the subject ‘is clearly an exceptional and highly atypical example of LGBT behavior.’ [1] And he is right. Instead of focusing solely on the harsh oppression homosexuals had to deal with in their normal lives, they chose to highlight the small ‘safe haven’ gay men sometimes found at sea. From the start they meant to portray this small peace of hope and agreed to mainly illustrate the sense of freedom and fun that characterized the experience of the men who had helped making the exhibition, while not ignoring their hardships either.[2]

Even though choosing to go with such a positive approach obviously has its challenges, it can turn out to be a holy grail for exhibitions like this. For Stanley the main message of the Hello Sailor! exhibit turned out to be its affirmation of our humanity, which she talks about at the end of this video interview here: ‘To me, this exhibit is a real sign of hope about humankind, that we can tolerate differences, that we aren’t narrow-minded.’

And maybe she is right. Maybe it’s not a crime to think about how to bring a more lighthearted feel to exhibitions like this, so that the subject speaks to a broader public. Of course historians should never lose sight of the oppression that the queer community did endure, and to this day still endures. But Hello Sailor! proves it doesn’t always have to mean that we play those hardships down by choosing a more positive approach on the matter. In Tibbles’ article it became clear that a lot of visitors still felt the grief of oppression after visiting the exhibition, even though the general tone of Hello Sailor! wasn’t about misfortune and misery.[3]

By focusing on this duality, the negatives as well as the positives that often stayed behind the scenes, we might be able to give the public a more approachable and inclusive view of gay life. In the case of Hello Sailor! this approach worked wonders: the Maritime Museum embraced the lightheartedness of the exhibition, opening it up to children and families and thus made it possible for a lot of people to learn about this important part of history. After it toured through the UK the exhibition made it to Canada in an almost symbolic journey overseas.

Even though it might feel unnatural to decide on a more positive approach with subjects like this, the Hello Sailor! exhibition proved it can be done, and successfully so. Thankfully, Stanley isn’t completely alone in her statement. In 2014 for example this interesting online exhibit chose to focus on the first report by a religious body that espoused a positive understanding of homosexuality in 1963.

The key, in my opinion, is to not blindly focus on oppression and negativity, but to keep an eye out for the lighter parts of history as well: a duality which hopefully, in Stanley’s words, brings out more tolerance and acceptance.

[2] Tibbles, ‘Hello Sailor! How marine museums are addressing the experience of gay seafarers’, 166.

[3] Tibbles, ‘Hello Sailor! How marine museums are addressing the experience of gay seafarers’, 168-171.