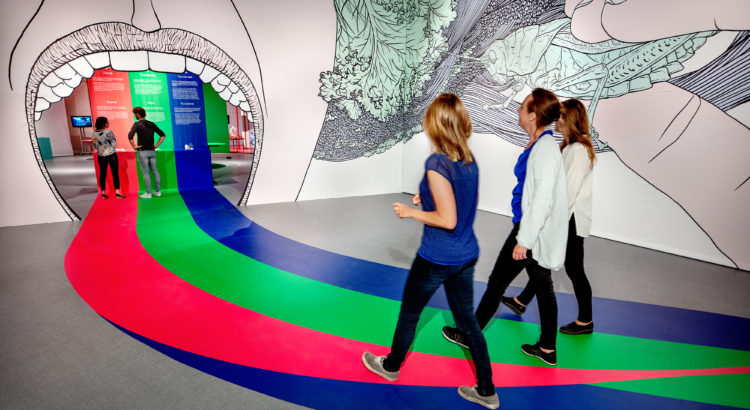 ‘We shall escape the absurdity of growing a whole chicken in order to eat the breast or wing. By growing these parts separately under a suitable medium’ – Winston Churchill (1931).

These words are greatly presented in the ‘Future Foods’ exhibition in the NEMO Science Museum in collaboration with Next Nature Network. This exhibition shows food alternatives we could possibly be eating in the year 2050. Just like Winston Churchill, this exhibition aims to question our current food system. It’s expected that by the year 2050 the world population will have grown to 10 billion people. More mouths need to be fed, but with what kind of food and which innovations? What kind of courses will be laying on our plates?

So we need to look at alternatives to feed the world. This is exactly what industrial designer and curator of the exhibition ‘Future Foods’, Chloé Rutzerveld, wants us to think about. Walking into the exhibition you are presented with three options for future food production, namely animal, plant or functional. The options are clearly separated by neon colours to distinguish which alternative you’re visiting. At some points two colours overlap to show that not all the alternatives stand completely on their own, for example some meat alternatives rely on plants or vegetables. In addition to the function of division, the colours create a futuristic atmosphere within the exhibition. For this post I will focus on the animal alternative.

Indicated by a meat-like pink, the animal alternative introduces the audience to different replacements for the meat industry. From broiler insects to knitted meat, the animal alternative explains it all. As an audience you are first introduced to a table full of insect-dishes. With a bit of a funny feeling about insects lying in your Italian pasta you move on to cultured meat. The showstopper of the animal section is the ‘Meat the Future Lab’, where different versions of cultured meat are represented. Cultured meat is made out of stem cells from animals, which would mean that no animals need to be slaughtered for us to eat. Thereby has the exhibition all kinds of interactive devices. You can create your own menu with extraordinary dishes like dodo nuggets, transparent sashimi or knitted steak. You can even meet the pig in the restaurant garden if you ask the waitress nicely.

At the entrance everybody is asked, before they have seen the exhibition, to put a bean in a tube which represents the best future food innovation in their opinion. When leaving the exhibition you are faced with the same question, but now with the knowledge you have gained by seeing the exposition. So things have come full circle. By posing the question multiple times the curators make you think twice about your choice, because none of the alternatives are perfect. In an interview with the Volkskrant Chloé Rutzerveld says that the exhibition can’t give exact answers about our future eating patterns. Although this would be favourable, it’s not what Chloé Rutzerveld is aiming at. In the interview she talks about questioning our current eating patterns and wanting people to think about the future alternatives we’re facing. In addition she wants to show what influence science and technology can have on food by designing certain dishes.

However, NEMO Science Museum isn’t the first and only one to worry about the future of our food system. In 2015 museum Boerhaave in Leiden created an exhibition about the scientific view of our prospective courses. The exposition has a broad spectrum which doesn’t only focus on food, but also on technological instruments. In addition there’s currently and exposition in London called ‘Food: Bigger than the plate’, which focuses on the process of creating a new food system. Altogether you can say that our future eating patterns have been a subject of discussion among scientists and museums.

Not only scientist are committed to the future of food, author Robert Biel wrote a book about London in 2062 in which he talks about our prospective eating. An aspect which Biel discusses, but what was missing in the exhibition were the circumstances in which we will be living in the year 2050. Economic, climatic and social circumstances can play a big role in what kinds of food we will be eating. The ‘Future Foods’ exposition focuses mainly on the food and not on the condition in which we will be living. The exhibition would be complete if the curators had sketched an idea about what they would think the world would look like in 2050.

However, the element that makes ‘Future Foods’ in NEMO special is the combination of technology, science and design. By combining these aspects you create an extraordinary exhibition which has something for everybody. For example the method of creating cultured meat can be understood by every age because of the step by step explanation. After the steps you can look at the life-like dishes in the ‘Meat the Future Lab’ where it all becomes a form of reality. Even though we can’t eat the designs set up in de exhibition, it gives you a taste of what the future holds in store.

Curator Chloé Rutzerveld about the exhibition: