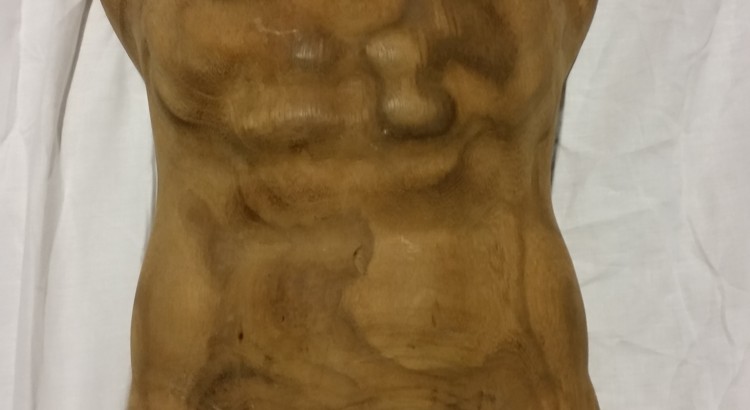 Just a wooden torso you would think. Just carved wood, like any other sculpture bought in Bali in Indonesia, while riding on a scooter across the island, made of local wood. Yes, just that. But the object’s journey makes it just a little more than that.

Jan, a gay man from Zwolle, bought the torso eight years ago while being on holiday, from a local artist having all kinds of erotic sculptures for sale. Bali is one of the many islands in Indonesia and mostly considered the free party island. However, most of Indonesia is not tolerant towards gay men or women and the ideal of the nuclear family home is constructed through Islamic faith and tradition. Jan brought the torso to the Netherlands, where it ended up in his attic to lay there for six years. Two out of three carvings laid there, while the biggest one was standing downstairs. Jan bought three sculptures that day in Bali from the same artist. One day, when Jan was in his attic and found the torso again, he thought: “What should I do with it?” Suddenly he realized: “It has to be at Club Church.”

Jan, a gay man in his late sixties, visits Club Church almost every two weeks for a special tuesday night: the FF night. Fist fucking is a fetish and Club Church is a fetish club, renowned in Amsterdam. Every  other week Jan books a hotel room in the city to be able to enjoy the party, because he doesn’t live close and there are not much other possibilities for him to meet like-minded people. He donated the statue because he appreciated the staff and the organization so much, for giving him this opportunity to fulfill his desires.

Jan’s story about Club Church is about the need to express a sexual identity, a safe haven for those with like-minded interests to perform that identity. Club Church has been giving that place for all kinds of fetishes for the last 7 years. From gay SM-parties to the mixed gender regular thursday nights with cheap drinks, no dress code and drag queens: it’s all possible. The torso got a nice place on the wall, being an example of places of freedom and sexual identity, while originating from a place where these freedoms are not as normal as here.

Amsterdam has a rich history of gay nightlife and being that place of freedom for sexual identities, but the high tide seems to have been gone for a while. In the last couple of years one-third of the venues closed. One of the owners of Club Church, Richard Keldoulis (aka Jennifer Hopelezz), gives three explanations for this tendency: internet, tolerance and AIDS. Richard explains in a TV-program (Spuiten & Slikken) that the rise of chat rooms and gay location-based apps decrease the need for a place to meet others, but does this invisibility of gay men not undermine the need for visibility for permanent tolerance or is it the next step in emancipation, integrating into the mainstream?  The general tolerance of gay men in the Netherlands, especially Amsterdam, makes the need for a special gay venue also less important: gay men go out where straight folk go. Lastly Richard states that the AIDS-epidemic dating from the eighties hit the gay community hard, especially the night birds and extravagant people, that would now start a club. They just died.

On the other side: the general decrease in nightlife corresponds to the loss of gay nightlife, taking into account that the economic recession of the last seven years especially hit this sector. Thinking about supply and demand in a situation where it concerns only 5% of the world population deserves more thought. Business for difficult niches, especially when modern technology takes away a platform function, means that supply has to adjust to the shrinking demand. Therefore, today’s homosexuality in the Netherlands may be less visible in the form of nightlife and extravagance, but TV-shows, commercials and other media nowadays include homosexuals. From this perspective, the disappearance of gay nightlife in the city towards national representation and visibility can only be a positive trend, where gay rights are concerned. Urban gay culture transforms into a national culture. One that is inclusive and ‘normal’, but also means letting go of nostalgic mourning about past grandeur and prestige. Inclusiveness is a desirable ideal, even if it means a change of customs and tradition. What do you think about the consequences of the disappearance of gay nightlife and places to express a sexual identity? What will people like Jan have to do when their places transform into inclusive hot-spots?