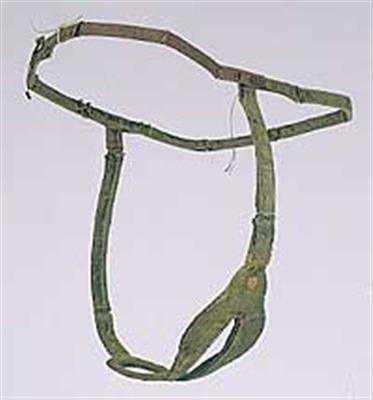 What do you do when you don’t trust your partner and want to make sure they’re not cheating on you? Do you look through their phone? As those devices are relatively new, that has not always been possible. For a long time, people used other means to control their lovers, like a chastity belt. Or so we thought.

Disclaimer: this blog post uses the name Boerhaave Museum instead of Rijksmuseum Boerhaave to avoid confusion with the Rijksmuseum in Amsterdam.

The Boerhaave Museum, a science history museum in the Dutch city of Leiden, has such a chastity belt in its possession. It is made of hinged iron parts and was covered in velvet. It has two inscriptions: at one of the holes you can read “9293” in white paint, on the tag is written “mfa 1450”. The Museum estimates it was made between 1850 and 1925, but does not specify where. In 1910, the object was transferred from the Rijksmuseum in Amsterdam to the Medical Pharmaceutical Museum of Amsterdam. According to the former head of the MPM, the chastity belt might have been the possession of a doctor or a hospital who left their belongings to the Rijksmuseum. After the MPM closed in 1982, the belt moved to the Boerhaave Museum in Leiden, where it currently is stored in the depot. The museum has another chastity belt in its possession, dating from the same period, but covered in chamois leather. Unfortunately, no origin story of that one is available.

The use of a chastity belt, however, is much older. For a long time, historians have thought that it was invented in the Middle Ages to put on women when their husbands went off to the Holy Land during the Crusades. However, about 15 years ago, Albrecht Classen found that the earliest traces of chastity belts in Europe date from the 15th century, more than a century after the last Crusade.

There are some practical arguments as well, as to why it would be very unlikely that chastity belts were invented in the time of the Crusades. Such enterprises took several years and chastity belts were not meant to be worn for a long time. Whereas most of them made it possible to urinate by the means of a hole, hygiene is still the most obvious obstacle. The metal belt, when worn uninterruptedly, is likely to cause wounds, which could easily get infected in that area of the body and lead to infections, sepsis and eventually death. Furthermore, if the woman had good contacts or enough money, the lock could quickly be opened by the next best locksmith. Besides, if a childless man wants to leave for a Crusade, it is fairly possible that he would want to make a baby with his wife before he leaves in order to have an heir. If the woman were to wear the chastity belt continuously, how would she give birth? The myth continues to be very persistent, as shows the timeline on the website of the Sex Museum Amsterdam.