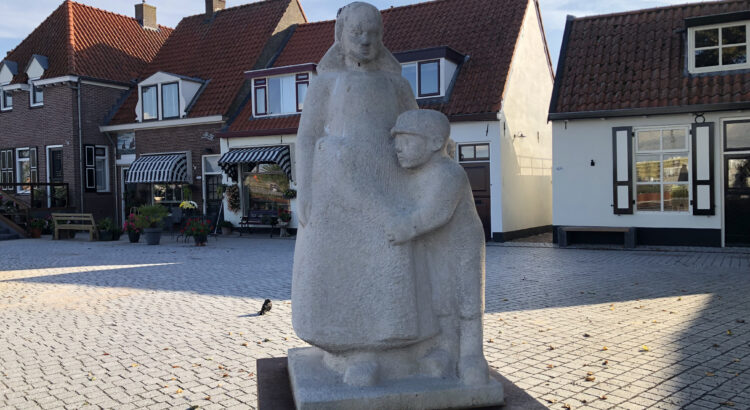 “The time you feel lonely is the time you most need to be by yourself. Life’s cruelest irony.” Writer Douglas Coupland describes the feeling of loneliness in a striking way. It’s an emotion that every person has to deal with on an individual level. However, it’s also a collective emotion of the community. It gives historical developments within a society a human face.

The monument ‘t Vissersvrouwtje in the Dutch town of Harderwijk symbolizes a collective feeling of loneliness. The stone statue shows a mother and her child. They hold each other tightly and look out over the harbor of Harderwijk. The monument is a tribute to the fishermen who died in the Zuiderzee. Harderwijk was a coastal town of the Zuiderzee until the opening of the Afsluitdijk in 1932. Many fishermen from Harderwijk lost their lives when they were hunting for herring, shrimp and eel. The statue also symbolizes the loneliness the women and children felt after their loved ones died.

The statue was made by the Dutch sculptor Gerry van der Velden. ‘t Vissersvrouwtje was festively unveiled in 1975, on the spot where thirty years earlier the women waved goodbye to their fishing husbands. 47 years after the unveiling of the statue, Gerry is back in Harderwijk. Back at the statue she’d put blood, sweat, and tears into half a century ago.

“In the early 70’s the mayor of Harderwijk was working on a plan for a statue in the harbor”, Gerry says. “They did research and eventually approached me through a museum. It was a huge honour.” The original goal of the mayor was to beautify the harbor by means of the statue. “To make it a successful project, I started talking to residents of Harderwijk. I also read many books about the history of the city.”

“The process started with a giant block of French limestone.”

After weeks of research, Gerry decided to design an statue of a mother with her child in traditional costumes. “For me, these characters symbolized Harderwijk’s culture.” After the mayor’s approval, Gerry was able to draw the statue and kick off the making process. “The process started with a giant block of French limestone. At that time there were already machines, but I carved out the body shapes by hand. That is physically demanding and you also have to work very precisely. After more than a year it was finally ready.”

Part of the community

About ten years after the statue was placed, historical awareness became a more important theme in Harderwijk. After 50 years of hard work after the closure of the Zuiderzee, Harderwijk started to focus on tourism, people got homesick for the past. During this period, the loneliness and grief grew among relatives. They wanted a place to remember their loved ones.

“I am proud that I was able to relieve the loneliness and mourning.”

While ‘t Vissersvrouwtje was initially designed for the decoration of the harbor, over the years it became the official memorial monument for the fishermen. Since the early 90’s, the victims are remembered during an annual commemoration at the monument. It makes Gerry feel satisfied. “The statue is alive, that’s wonderful to see. After fifty years, it’s more relevant than ever. It’s also nice that it’s still in the middle of the street and not in a museum. The statue has gone through a growth process and is now part of the community. It has a social function. I am proud that I was able to relieve the loneliness and mourning.”

After 47 years, Gerry doesn’t look back on the project with complete satisfaction. “A few years ago, the municipality moved the statue without informing me. It’s now a few meters closer to the water, but that’s not the problem. They also removed the pedestal without consultation. There was also a wrong name under the statue for a long time. Instead of Gerry, the creator was Annie. I felt no appreciation and at these moments the profession of an artist is quite lonely.”

‘T Vissersvrouwtje is an interesting object. As a little boy I walked through the harbor with my grandfather and he told me every time that it was a memorial to the fishermen who died. That image is so strong in Harderwijk that no one knows better. But in the first place, the object was placed to satisfy a meaningless ideal of beauty. Years later, the statue has acquired social value.

“She keeps the memories of the fishermen alive.”

The connection between the statue and the community has become more meaningful over the years. Due to the rise of historical awareness in Harderwijk, ‘t Vissersvrouwtje gained recognition. The strangest thing is that the artist is not appreciated for this. The municipality doesn’t talk to her and her name is even misspelled. Today, the statue should soften the loneliness of relatives. But on the other hand, the lack of recognition makes Gerry also feel lonely.

It’s remarkable that the statue is now of great significance to the community. Due to the poor relationship of the municipality with Gerry, the statue gives me a bittersweet aftertaste. However, the most important thing is that relatives can soften their loneliness through the statue. Poet Michel Martinus explains the importance of ‘t Vissersvrouwtje. “She keeps the memories of the fishermen alive. In the silence she remembers her old friends, still knows all the names of those who remained at sea.”