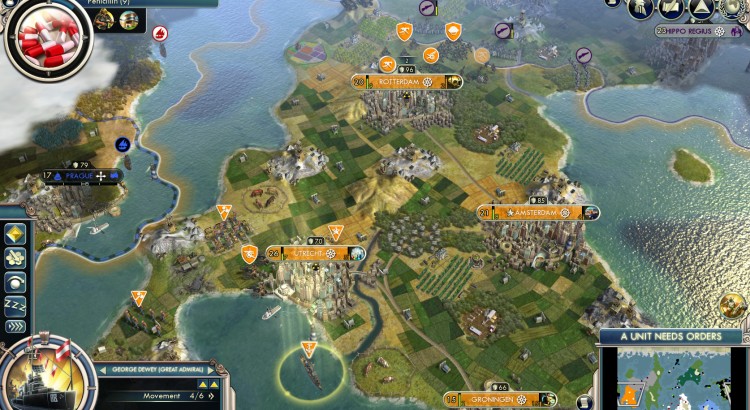 As a kid I spent hundreds of hours playing Age of Empires. Sometimes alone. Sometimes with my friends; competing with eachother during so called LAN-party’s. We bought a lot of chips and  booze, brought or laptops and played from sunset till sunrise.

The use of historical games as education

The game introduced me to a brief history of mankind, because you control the development of a prehistorian society into a post-modern one. The goal of the game is to do this as fast as possible, so you can conquer other civilizations surrounding you. The advancement of your civilization follows different ages – stages – like the dark age, the feudal age and the imperial age. With each age you’re society can build new types of buildings, create new weapons and develop new technologies.

For me this was a fun way to learn which technologies and buildings belonged to which period in history. But more importantly, it also gave me insight in causes, effects and correlation in history. It’s for a reason that games like Age of Empires are also used as an educational tool in the classroom, as this video shows.

Age of Empires is a spin-off of CIVILIZATION, the game that Trevor Owens discusses in his article “Modding the History of Science: Values at Play in Modder Discussions of Sid Meier’s CIVILIZATION”. The games really look-a-like, although Age of Empires is a bit more focussed on war and conquering while CIVILIZATION focuses more on science and technologies.

Advantages of gaming as educational tool

In his article, Owens briefly points out the educational role CIVILIZATION plays. In the beginning of his article he sums up some critiques of scholars on this role:

The critiques above are mostly about the content of the game, which is too western centered according to Douglas and Pobłocki. The latter for example argues that:

“This history is not contingent in any way, but it is the history of the West. The Civilopedia… explains for example that philosophy – which is a major discovery that leads to the two most advanced economic systems, democracy (in Civilization I) and republic (in Civilization III) – was invented in Greece. More generally, the technology tree is structured around the Ancient, Medieval, Industrial and Modern Eras, each of them representing the European and Northern American history”

I was disappointed that Owens leaves it at that without going more deeply into their arguments. Especially because I believe that historical games like Age of Empires and Civilization can definitely be a great asset in the classroom. Douglas and Pobłocki discard some historical insights you can gain by playing the game. Not only does it help students to gain more factual knowledge about history,  the game also facilitates more insight in how new ideas and events explain the emergence of new patterns, and how history is a chain of causes and effects.

These arguments in favour of gaming in the classroom – and more specifically historical games like Age of Empires and Civilization – are not only from my own experience but they also have a scientific basis. In his article “Using Civilization Simulation Video Games in the World History Classroom” Aaron Whelchel sums up many more advantages of gaming as an educational tool: It fosters student interaction, critical thinking and problem-solving thinking. On top of that people learn best when they’re entertained.

The best example he gives is the dissertation of Kurt Squire on CIVILIZATION III, who found that:

Squire even concluded that:

So at first I was disappointed by Owens, but later on I realised that he does give a (indirect) response to the critiques of Pobłocki and Douglas. He even comes with a solution: Let historians and modders work together to bring more historical authenticity, nuance and complexity into the game. That way you can try to overcome the problem of the western cultural and racial superiority in the game and the promotion of an imperialistic relation between person and nature. For example, modders can change the tech tree in a way that it not only represents western history. So my suggestion to Douglas and Poblocki is: Join the Apolyton civilization site and work together with modders to create a new – educational-proof –  version of Civilization.