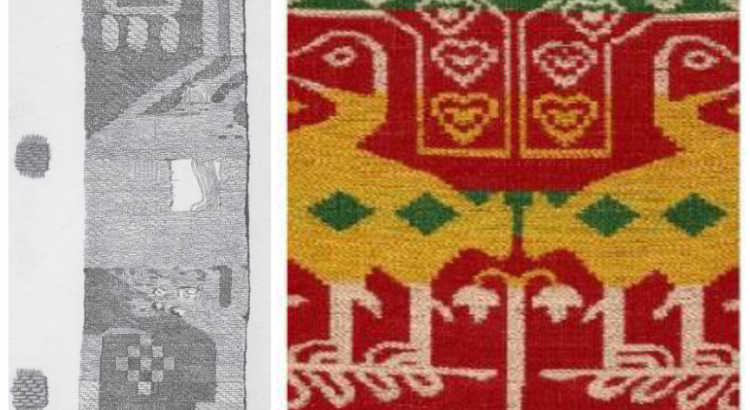 A detail of an ugly Christmas sweater? Nope, far from it! This piece of silk is over a thousand years old and has travelled all the way from Asia to Northern Europe. For over hundred years little attention was paid to these silk fragments, but now, through reconstruction techniques and detailed research, we can bring back both its colour and its meaning. Are you ready for a journey?

1904: a team of archaeologists find a Viking ship burial in Oseberg, near Oslo, Norway. It is found inside a mound, a small man-made hill. Inside the 21-metre long ship lay two women, who were approximately eighty and fifty years old when they died in 834 AD. Accompanying them are numerous animals, food items and crafted textile objects such as the silk strip depicted above. During the Middle Ages, it is not unusual to bury someone with items that reflect their status in their community. It is safe to say we are dealing with a very wealthy woman here! The other woman is her servant.

Only textiles such as wool, flax, hemp and nettle were produced in Norway, so the silk must have come from abroad. We know that the Vikings travelled to many places within and outside of Europe, not only to raid but also to trade. The Vikings even had multiple trading hubs and towns, one of which was only 40 kilometres away from the ship burial. Or they might have travelled to the middle east in which silk strips were so common that they were used as payment. But the silk itself also gives us more information about its origin. Because even though the colour of the silk strips has mostly faded away by now, by doing biochemical research we can find out more about its making process: the red colour was partly created from an insect which lived near the Mediterranean region. So the silk material must have originated from either the middle east or the Mediterranean region.

But that’s not all. On the first photo you can see that the pattern resembles a duck with hearts surrounding it. These are symbols that originate from Central Asia, possibly China. During the Middle Ages these symbols were heavily copied, but if we compare the first photo with the examples below we can see that the silk pattern from the ship burial is greatly simplified. Note how the duck has a more angular shape than both fragments from France and Uzbekistan. This suggests that the Vikings probably only acquired the raw silk material and weaved the pattern themselves. They are made in a weft-faced, compound twill technique that is often called samite. Inside the ship burial the archeologists also found a vertical loom, which suggests that the women that were buried there might have been weavers themselves. Did Vikings just weave random strips of silk, then? No, from finds in a cave burial at Moščevaja Balka, near the northern part of the Caucasus, we know that the local tribes there sew silk strips together to make clothing and also used the silk strips as trimmed pieces on linen fabrics. These silk decorative borders would give the clothing items a more luxurious look. It seems likely that the Vikings also used the silk strips for this purpose.

Researchers think that the Vikings, because of their travels and trade network, must have known at least partly of the special status silk had elsewhere. In Christian communities, for example in France and Germany, silk had a sacred status, and it was often used in royal graves or for Christian relics. They believed that the silk would absorb sanctity through contact with the relics. The court of Byzantium developed a distinct hierarchy of clothing, in which the quality and design of the silk signified your rank. It was also used as a system of reward and payment in both Byzantium and the Persian Empire. Further southwards, high ranking members of the Umayyad and Abbasid dynasties received annual gifts in the form of clothes and fabrics. It is no surprise that the Vikings also wanted to obtain silk to show off their status.

So in this blog post we have seen how silk that was found in a ship burial in Norway, originated from either the Mediterranean or the middle east, with patterns that find their origin in Central Asia. Even though its exact status and meaning varies in different parts of the world, it signified high status everywhere. So fashion trends are definitely not a modern phenomenon. It’s a small world, even in the Middle Ages!

Watch the video below for an impression on how the heavily deteriorated textile fragments are transformed into amazing, in colour, reconstructions: